Trudeau Publicly Declares Himself a Catholic! 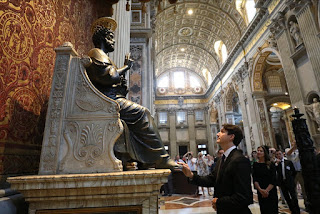 Edit: clearly he's been to confession, renounced his support of sodomy, infanticide and is ready to wage war against Islam!
MONTREAL, May 19, 2017 (LifeSiteNews) — Archbishop of Montreal Christian Lépine has defended giving Holy Communion to Canada’s notoriously pro-abortion Catholic prime minister during Mass on Wednesday, describing it as “a gesture of hope.”
Liberal Prime Minister Justin Trudeau received Holy Communion and was among the dignitaries who spoke from the sanctuary at a Mass marking Montreal’s 375th anniversary, and which CBC broadcast live from Notre Dame Cathedral.
Cardinal Gérald Lacroix of Quebec City, Cardinal Thomas Collins of Toronto, and papal nuncio Archbishop Luigi Bonazzi were among the prelates who concelebrated with Lépine.
The event was widely publicized, with the Catholic Register running a photo on its Facebook page. Video of the Mass was also archived on CPAC.

After reading this, I not sure who is more in need of repentance, Justin Trudeau or Archbishop Christian Lépine. Trudeau is just a diabolically disorientated layman but Archbishop Lépine? Well, Luke 12:47-48 springs to mind.

That is the Francis way. You give Communion to the most vile in the hope that it will transform them. Where was he when Jack the Ripper was the scourge of London?

bergoglio doesn't give a whit about transforming anyone; at least not to Catholicism. His 'way' is to give Holy Communion to the most vile in the hope that it will 1) defile the Sacrament, and be spittle on the Face of our Savior; 2)Confuse the Faithful and effectively 'change' doctrine (i.e., convince the vast majority that you have..cause hey, everything you say and fart is "magesterial") to a sacrilege; 3) and most importantly, to have the person eat and drink condemnation unto himself. THAT's the bergoglian way.

Today's potCommunion prayer hit me like a ton of bricks, and is most apt in this particular instance.....
"That we may BE MADE WORTHY of Your SACRED GIFTS, grant us, we beseech You, O Lord, ALWAYS TO OBSERVE YOUR COMMANDMENTS...."

If you love Me, keep My Commandments....

I am Canadian... and I can tell you this is the biggest joke or fake news I know!!! He prays to the Allah in the Islamic centers, he is for abortion laws, euthanasia as well as same sex marriages. His participation in Pride Parade is well documented yearly... Are these sound like Catholic to you?

When Trudeau became P.M., a meeting took place, after which the bishops were to announce whether Trudeau would be allowed to receive Communion.

I predicted the answer would be affirmative. After all, the guy is so CUTE! And he has a SIX-PACK!

This guy is as crazy as his crazy mother was. (I am old enough to remember her endless shenanigans hanging out with the Studio 54 crowd.)
Give him a few more years and they will be scraping him off of the ceiling at the asylum.

This is an absolute joke. How does the "Good Archbishop" think that Justin Trudeau perceives his being given Holy Communion? Does JT think it is a sign of hope of future repentance or is it a wink and a nod that all is A-OK and everything he does is acceptable? Catholics like Trudeau have put themselves in the place of Jesus and believe the can do no wrong because they are "caring" individuals. What a sad state of Catholicism here in Canada. Many Catholic souls are being lost due to poor leadership.

This man recently encouraged the Irish Prime Minister to abolish the eight amendment to the Irish Constitution ,which protects the life of the unborn.He is a promoter and supporter of the mass slaughter of human beings in the womb. http://www.irishexaminer.com/breakingnews/ireland/justin-trudeau-urges-taoiseach-to-liberalise-irish-abortion-laws-802794.html

Even the popes and traditionalists declare themself Catholics.

Louie Verrecchio, Ann Barnhardt and David Domet have probably not understood me since they do not agree or disagree with me : four 'red pills'
http://eucharistandmission.blogspot.it/2017/10/louie-verrecchio-ann-barnhardt-and.html

Remind me again...oh yeah, Quebec bishop...late 60's? OK - makes sense now. Absolute scandal. This is a sucker-punch to the faithful in the trenches here in Canada - we're getting used to it now. Last time I checked, the eucharist was a sign of communion, not rainbow-filled happy thoughts of "hope". This is on the archbishop - he should (and does) know better. Disgusted. Saddened. When's mandatory retirement again?