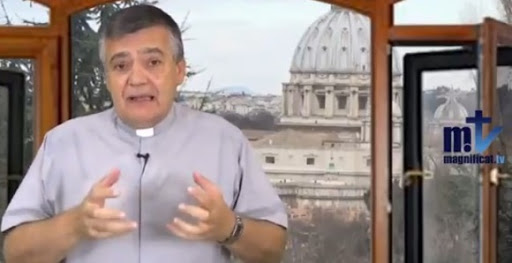 "The murderers are guilty, but the mayor of Barcelona was obviously negligent because she refused to secure the Rambla area for reasons of ideological correctness."

Santiago Martin, well-known priest and founder of the Franciscans of Mary, last Sunday during the sermon in his parish referred to the refusal of Mayoress Ada Colau to secure Rambla by traffic bollards as the government in Madrid had demanded. On 17 August, five men in the pedestrian zone rushed into the crowd with a vehicle. 14 people were killed in the terror attack by the Islamic State (IS), and we're 130 injured. Colau, mayor of the Catalan capital since 2015, is governed by Barcelona en Comú, a left-wing alliance of the left-wing populist movement Podemos, Greens, Communists and other leftist groups.
Image: InfoVaticana

According to a somewhat unclear article in Infovaticana it appears that Fr. Martin may have incurred some kind of discipline from the Bergoglian archbishop of Madrid. Is there any info on this situation?

The posting is super interesting. Communists in Spain may be aiding and abetting the terrorists. This mayor may be part of a network.

A further look at Infovaticana suggests that the archbishop just issued a statement with uncommon haste disagreeing with Fr. Martin, after the usual leftist press had squawked. More hierarchical leftism in the church of Jorge.

Ill check it out. Thanks!

I have a feeling that this poor priest will get reprimanded by the archbishop.

@JBQ It's a bit of a stretch to extrapolate from this priest's comments that Barcelona's Mayoress is actively facilitating moslem fanatics. Fr.Martin accuses her of being negligent rather than complicit. Her negligence arising partly from her loathing of Europe's Christian heritage and also from a Catalan separatist mindset antithetical to all governance or guidance emanating from Madrid. No surprise really from an ideological inheritor of those responsible for the slaughter of 13 bishops and over 6,500 priests and religious during the Civil War.

Why is there no political right wing in Spain?

"According to a somewhat unclear article in Infovaticana it appears that Fr. Martin may have incurred some kind of discipline from the Bergoglian archbishop of Madrid. Is there any info on this situation?"

We should all pray for a swift end of the Bergoglian tyranny. He one of the most evil Popes in history( and there were indeed a few, especially in the early centuries of the Church). None, however,had with evil intent deliberately tired to pull down the Church tradition and its foundations as does Bergoglio and his henchmen.
Let's all pray that Pope Francis, even by his own prediction, is gone "to the house of the Father", before five years are up. And then we have a Catholic Pope.
Damian Malliapalli

@Blotto: He who is not with Me is against Me.