Relic of Saint Nicholas Drawing of Millions of Pilgrims in Moscow 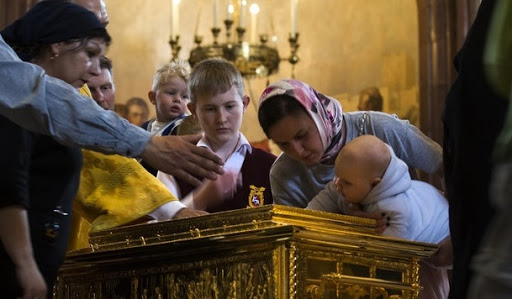 (Moscow) For the first time in the history of Russia, there are relics of St. Nicholas of Myra, one of the saints especially worshiped in the Orthodox Church, on Russian soil. After almost a thousand years, for the first time, a relic of the Saint has left Italy. 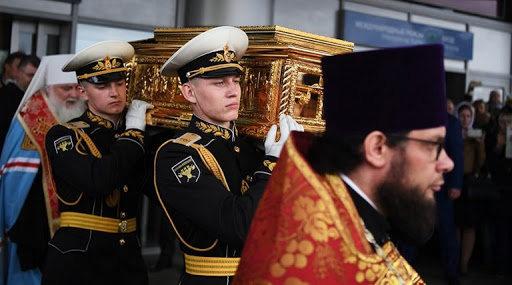 Arrival of the relic shrine at the Moscow airport

During their meeting in Cuba, Pope Francis and the Russian Orthodox Patriarch Kirill agreed in February 2016 that a relic of the Saint would visit Russia. This passed May 21, it was time. All the church bells in the Russian capital Moscow rang as a sign of the great joy over the arrival of the relic. In a spectacular procession, it was taken to the Cathedral of Christ the Savior, where Patriarch Kirill celebrated Divine Liturgy.

Since 22 May, the relics have been venerated by the faithful in the patriarchal church. Millions of believers have come. Since then, people have been patiently standing in mile long lines in front of the cathedral to find their way in. Often, it takes eight to nine hours before they can step in front of the relic and just wait a few seconds. That is enough to touch or kiss the shrine. Prayer is "in the heart" on the way there, as the Russians say. For this reason, the pilgrimage line moves rather quickly. All the more surprising is the never-ending line in front of the cathedral.

On a dedicated website, believers report on their pilgrimage to the relic, including a young woman, Alena Romanenko. She said, "After I crossed myself and kissed the relic, the priest allowed me to kiss him a second time, no one pushed or protested ... I think that everything depends on what you carry in your heart and the Saint brings it." 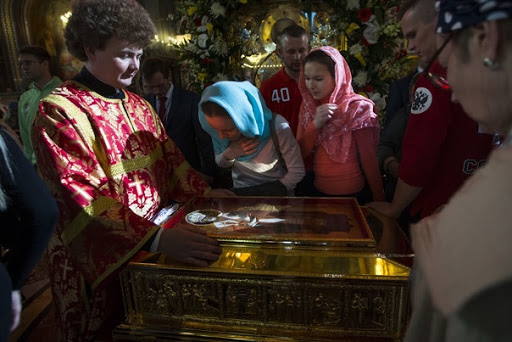 A few seconds at the reliquary shrine

On all Moscow metro lines (the Russian capital has the world's fourth largest subway network after Shanghai, London and New York), the visitor to the St. Nicholas Reliquary has been given directions since May on how to come to the pilgrimage.

So far, only the exhibition of the girdle of Mary in 2011 and the relics of Saint Andrew 2003 had moved such crowds. In order to find something similar in the past, one has to go back to 1989, when the body of Sakharov was exhibited in Moscow, and the people were kept in long lines at a most inhospitable temperature of up to minus 20 degrees centigrade. (-4 Fahrenheit) Communist rule in the truest sense of the word.

Vladimir Putin, the current President of Russia, visited the relic on the evening of May 21st.

Until July 12, the relic remains in Moscow, then it is transfered to St. Petersburg to the Alexander Nevsky Monastery. In St. Petersburg, an equally impressive number of believers are expected. On the way to the shrine of the saint they will touch or kiss, they will pass the tombs of Dostoevsky and Musorgsky, who are buried there.

Remains of the Saint were translated to Bari from the Muslims 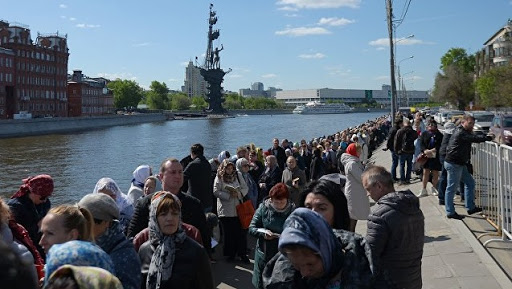 The mortal remains of the famous martyr bishop have been preserved since 1087 in the southern Italian city of Bari, where they had been brought for the protection from the Seljuk Muslims from the small Asiatic town of Myra (today Demre in Turkey). Since then they have not left the Apennine peninsula. After coming to terms with Patriarch Kiril on 19 June, part of a rib of the saint was recovered from the crypt below the altar of the basilica named after him in Bari. On the morning of May 21, 2017, Metropolitan Hilarion, the "Foreign Minister" of the Moscow Patriarchate, celebrated a Divine Litirgy at the St. Nicholas Basilica of Bari, attended by Monsignor Francesco Cacucci, Archbishop of the Apulian city. At the end of the liturgy, the metropolitain received the relic from the representatives of the Catholic Church.  Hilarion brought the relic to Russia, in a specially designed shrine where the relic was received at the Moscow airport with military honors.

At the request of the Patriarch, all the church bells of Moscow were ringing for this event at 6 pm. The relic reached Russian soil exactly on the eve of the feast, with which the Orthodox Church commemorates the transfer of the relics from Myra to Bari. With a grandiose procession, Patriarch Kirill accompanied the relic into the Cathedral of Christ the Savior, the main church of Russian Orthodoxy. The cathedral was blown up by the communist rulers in 1931, but after the end of the Soviet dictatorship it had once again been built up according to the original. On 19 August 2000 it was blessed by Patriarch Alexius II, the predecessor of Kyrill. 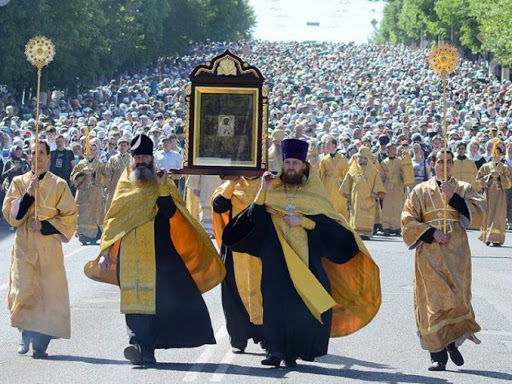 Also this year's Great Procession of Velikoretskoye, one of the great processions of Russia was marked by the presence of the relic of St. Nicholas. The procession, which ended on June 8, is actually a multi-day pilgrimage. It lasts from the 3rd to the 8th of June and finds its end in the inconspicuous place of Velikoretskoye on the river Velikaja in the remote Russia. In Velikoretskoye, about 50 kilometers northwest of Kirov, there is a monastery, where an ancient icon of St. Nicholas was preserved. The icon was found in 1383 by a farmer named Agalakov on the bank of the river. The revered icon is credited with numerous miracles. Soon the procession, still carried out today, was carried out, with the icon being carried 150 kilometers.

During the Soviet period it was first brought to the bishop's church of the city of Viatka, which was renamed by Stalin for the Communist leader Kirov, whom he had executed. When the Communists destroyed the Cathedral of Kirov in 1935, the icon was lost. The Great Procession was already forbidden at that time, but never broke off completely, as small groups of believers kept them secret. After the collapse of the Soviet regime, the pilgrimage was re-established and is now regarded as a sign of the orthodox rebirth of Russia. Since the early 1990s the pilgrimage takes place every year, even if only a replica of the old icon is available. In 2000, Patriarch Alexius II granted the event the status of an all-Russian procession. This year, 35,000 people came to a remote place, including Patriarch Kiril, who, through his personal presence, made the bridge to the relic of the saint, which was revered in Moscow.

Definitely a prefigurement, the consecration will happen soon.

What are the major differences between mainstream Orthodox & the old believer Orthodox?
Online info is very limited.

Is there any reason why the Russian bishops can't consecrate Russia or have they already?

I remember Fr Malachi Martin saying many different occasions that
salvation will come from the east.

These relics are in a better protection against the muslims in Russia than in Bari.
I hope they will stay in Moscow forever.

It's just a rib, but Italy is being invaded.

Don't be fooled,Russia is not the conservative nationalist paradise that we've been led to believe.
They are just as degenerate as the West,albeit in different ways.

they could if they wanted, might help something or might not. Our Lady asked specifically for the Roman Catholic Bishops and Pope to consecrate Russia and there is NO WAY OUT of this duty. You can't consecrate the world, or the Soviet Union or this or that. She asked specifically for what she wanted and there will be NO turnaround until they do it.

Russia, Catholic and turned in the right direction? Look out.

I agree with that statement, they've not converted yet but we are seeing the signs obviously of a faith reawakening. I have communicated with some Orthodox faithful and they always have this angry argument: "why do we need a consecration, who is the Vatican to consecrate anything as they're so decayed as a Church, and finally they always say "what is a consecratoin". I don't know if they're just being argumentitive or if they truly don't know what a consecration is. I have pointed out the passages on the Blessed Virgin's heart being pierced, etc. Do they not consecrate Churches and places in the Orthodox religion so that they truly would not know what is meant by "cocnsecration"?
At any rate I tell them it's not for them in the sense that it's something the Bishops of the Roman Catholic Church were charged to do.

Rome can't even work out the SSPX..How do they think they will talk the Russian Church into submitting to the pope? In case any of you aren't aware, Patriarch Kiril has on more than one occasion denounced the pope of Rome and the papal dogmas

Rome won't have to say a word to the Russian Church, the consecration simply has to be made and the prophecy says it WILL be made, and our Lady will take care of the rest.It's just a matter of SIMPLE FAITH! If our Lady asks you to dig down and put your face down into the grass to do something (Saint Bernadette), you simply DO IT.