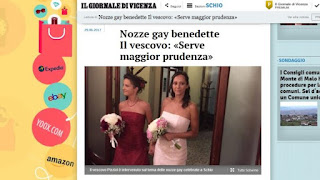 
(Rome) Last Saturday, two lesbians of 37 and 34 years of age were "married" in the northern Italian city of Schio. The wedding ceremony took place in the town hall with the "tiny addition", that a priest, Don Giuseppe Gobbo, blessed the wedding rings in advance which the two women put on each other's left ring finger. The "homosexual marriage" was decided in June 2016 by the Italian Parliament with the tacit approval of the Episcopal Conference on the condition that they should not be called "marriages". Bishop Nunzio Galantino, the General Secretary and "Pope's man" at the Episcopal Conference, had informed the government behind closed doors. 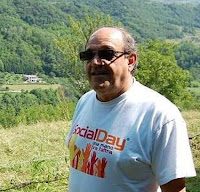 Officially, "homosexual marriage" is therefore called a "civil bond," but is equal in marriage to the marriage, except in the name. This results in the title of the local newspaper, Il Giornale di Vicenza, of June 27: "Civil Marriage is Blessed by Priest." The report in a recently celestial Catholic area is as follows: "Two girls crown their beloved room with a civilian bond and the priest bless their rings." The mayor left the wedding ceremony to an oppositional council of the radical left.

Don Gobbo was ordained priest in 1978. He helps on Sundays and holidays in a pastoral center in the mountains. He is mainly the president of the social cooperative Progetto Zattera Blu (Project Blaues Stream), a social association in the diocese.

According to the media reports, the faithful in Vicenza drew attention to the incident. Bishop Beniamino Pizziol called upon Don Gobbo to discuss the matter with him. The result was a press release by the diocese. It is stated that the conversation "clearly showed" that the priest "was guided by feelings of undoubted pastoral love." However, he had obviously "underestimated the impact and consequences of his gesture, which threatened to appear like an unsatisfactory equation between the civilian covenant with the Sacrament of Marriage."

The Bishop called "his priests to greater prudence and discretion," "reaffirmed the doctrine of the Church on marriage," but did not take a position on homosexuality, but confined himself to inviting "all pastors and faithful to the diocese, To live and proclaim the Gospel with love and readiness so that fidelity to Christian values ​​and understanding of the individual and the different situations in which they are can be realized in a common path of faith and true Christian love."

In short, the excitement about the blessing of the ring by the priest, which was carried out in open contradiction to ecclesiastical doctrine, dissolved itself in nothingness. There remains the dubious impression that the Church has accepted, even blessed, the "homosexual marriage". Only one must not (still) be caught.

More insanity from reckless "leaders." The Roman Church is almost identical now to the Episcopalians.

There is a big difference so far and I emphasize so far. There are no lesbian bishops.

No lesbian bishops yet, but many Cardinals and Bishops who are "queens."

It's quite simple. The faithful need to get their pitchforks and torches and head on down to the Bishop's' home for a visit / come to Jesus meeting.

With the liberals it always begins with a little gesture somewhere. Then the little gesture grows and becomes a mandate, rigidly enforced. Witness the culture war "victories" regarding abortion, widespread divorce, contraception, gay "marriage" and gender ideology. This little blessing of wedding rings in a recondite part of Italy will be the beginning of the psunami that will raze the Church---or at least the Novus Ordo caricature of the Church (perhaps a good thing).