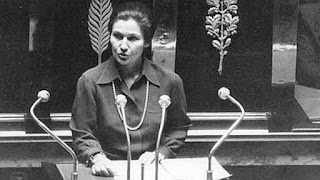 (Paris) Last Friday, June 30, Simone Veil died shortly before her 90th birthday. The French Bishops' Conference left a breathless Twitter message upon her death to praise her her as "very great".

Simone Veil has held the highest political positions. She was French Minister of Health (1974-1979 and 1993-1995, at the time under the Socialist President Mitterand) and first president of the first directly elected European Parliament (1979-1982). Above all, she was the first woman in this office. In 1982 she was honored with the Karlspreis of Aachen. From 1984-1989, she was President of the Liberal Group in the European Parliament and from 1998-2007 Member of the French Constitutional Court. For a better understanding, she has been part of the Liberal Party Union of the Démocrates et Indépendants (UDI) since 2012 , which cooperates with the US Democratic Party at the international level.
Veil, born in Nice in 1927 as a daughter of Jewish parents, by the architect André Jacob and by Yvonne Steinmetz, was taken to Auschwitz concentration camp in March 1944. Her mother did not survive the imprisonment.  Even she herself appeared up to the 80's in databases also among the Holocaust victims. In reality, she had survived National Socialism and had studied law in Paris after the war. Since 1957, she has worked in the French Ministry of Justice, and in 1974 she became Minister of Justice in the government of Prime Minister Jacques Chirac. As such, she passed the notorious French Abortion Act, which had been engineered by her.

The French parliament voted on 29 November 1974 at 3:40 am for the Loi Veil.  The voices of the Left opposition were decisive. In 1973, the bourgeois alliance was composed of Gaullists. Christian Democrats and Liberals which won parliamentary elections, and in May 1974 also presidential elections.The Liberal Giscard d'Estaing became president. The Left Alliance, led by François Mitterrand, of socialists, communists, and leftists had suffered a double defeat and was in the opposition. In the vote on Simone Veil's abortion law, however - as now in the German Bundestag in the vote on the "homosexual marriage" - the faction was annulled. The bourgeois presidential majority held a large majority of 302 out of 490 seats in parliament. The liberals, to which Veil belonged, wanted, however, with no less vehemence the legalization of the killing of unborn children than the political left. The left-wing opposition, which voted unanimously for abortion, and one-third of the bourgeois coalition government created ad hoc and otherwise non-existent parliamentary majority. Simone Veil became the model of feminism that was internationally celebrated by the Left and the Liberals.
On January 17, 1975, the abortion law came into force and became the largest mass grave of all French history. According to the Historical abortion statistics - France by Robert Johnston, which is based on official data, Veil's killing laws have already claimed 33,454 unborn children in 1975. According to official data, the French Abortion Act has so far has demanded nearly the deaths of 7,500,000. The number of children killed per year is indicated by more than 200,000 by the competent authorities.
On March 3, 1975, shortly after the law came into force, Simone Veil told Times magazine:

"With a change of law it is basically possible to change the human behavioral model. I find that fascinating."

Today, more than 95 percent of French gynecologists practice abortion or are prepared to do so. Less than five percent use a limited right to refuse conscientious objection. This is only for doctors, but not for pharmacists (morning after pill, etc.). Anyone who refuses on grounds of conscience have to bear serious professional disadvantages. He is consistently discriminated against during the search for job vacancies. The chances of a job as a primary are reduced to zero.

Unintelligible words of the bishops

In view of the immense ocean blood that Simone Veil caused by her abortion law, from which she never distanced herself, but which she defended until the very end and celebrated for it, the Twitter message of the French bishops is an incomprehensible scandal. The French abortionist par excellence was uncritically offered incense. The abortion victims, who are almost 7.5 million innocent, unborn children (in reality, more likely, more) who have fallen victim to Veil's law were not mentioned. The bishops thus behave no differently than the abortion ideologists. The unborn children are nowhere to be seen.They simply do not exist. They must be dehumanized and reified in order to be able to eliminate them without a rebellion of conscience.
The bishops wrote:

"We salute your greatness as a woman of state, your will, to fight for a fraternal [Masonic?] Europe, your conviction that abortion is a drama."

Mauro Faverzani wrote in the Corrispondenza Romana: "The idea is simply paradoxical to think that someone who has done everything to legalize and liberalize abortion can really see it this way," as the bishops have now claimed.
This distorted recounting of the bloody reality by the bishops is not really surprising. When Simone Veil was elected in November 2008 with 22 of 29 votes to chair the Académie française, founded in 1634, the Catholic hierarchy uttered not a word of disapproval, nor even a sign of indignation.

"Veil remains immortal" - award from the Grand Orient of France

France's Socialist President Emmanuel Macron published a long statement on Veil's death. In it he wrote:


Simone Veil was the last to celebrate her "work of life", whose only real "achievement", which made her internationally known, was the abortion law. On April 8, 2016, she was honored by the Grand Orient of France, the largest and most powerful Freemasonry in France. In the presence of Senate President Gerard Larcher, Grand Master Daniel Keller personally presented Jacques France's "Marianne" to Jean and Pierre-François Veil, her two sons who received the honors for Simone Veil.
On this occasion, Grandmaster Keller said that the Marianne was "a testimony of the attachment and recognition of the Greater Orient of France to Simone Veil, our sister of our heart." Keller praised Veil's "Republican activism" and her "struggle for women's empowerment, the daughter of secularism, which is the core of Masonic activity." He also praised her abortion law as,

"The symbol of the improvement in man and the society in which the Freemasons work: this law remains a pillar of our society."

"Every day in France, killing hundreds of children in the womb of their mothers is thus a pillar of the society that the Masonic Sect wants."

Mauro Faverzani wrote on the behavior of Catholic bishops:

"Nevertheless, the French church remained silent, always, and was distinguished only by its muteness. Only on the occasion of Simone Veil's death did it open its mouth."

The case of Veil is reminiscent of the Bonin or Emma Bonino case, as Veil from a middle-class house, driven by a radical attitude, became the central figure in the enforcement of the abortion law in Italy. Like Veil, she was honored as a minister and with high offices at the European level. At the beginning of February 2016 Pope Francis praised Emma Bonino pas "very great" 1) The bishops of France now offer Simone Veil the same praise.
Text: Giuseppe Nardi
Image: Wikicommons / Corrispodenza Romana
Trans: Tancred vekron99@hotmail.com
AMDG
Posted by Tancred at 4:49 PM

The "Land of Joan of Arc" (Jean d'Arc) now blacklists doctors who are against abortion? Simone Veil lashed out at the world and the French bishops bought it. They have a history of being weasels with their treatment of Joan. With a history of collaboration, who cares what they think?---Joan was asked at her trial if she believed in God by one of the bishops. She responded with "More than you do".

When the French become the minority in their own country ,she will be remembered as one cog in the wheel which engineered it.

La Marseilles says that you are wrong. It is all about taking the king (physical or ephemeral) to the guillotine.

Abortion is a satanic sacrament.
Anyone who pushes for or visibly supports abortion is most likely an active member of a Luciferian cult.

Those who "pull the strings", I am in agreement. However to most women, this is an act of empowerment to fight back against suppression by men whether alleged or factual. To gays, it is an act of allegiance to a cause. To atheists, it is a "hammer" on the stability of society.---The entire cause is Satanic. However, most members are just misguided. Our "friend" Adolph fooled many with his appeal to economic integrity for the German people.

It is important to keep in mind also, that the cancerous prodeath and antifamily Enlightment ideology is an inseparable part of the neoMarxism of the EU and the Democratic party of the US.It is sad to see that the materialist desire of former Eastern European nations to plead with tears to join the EU and support US in annexing their countries into the Western sexually decandent and self indulgent, self-centered, egocentric culture.The West has nothing to offer except pleasure and sexual primiscuity without guilt, and at a disregard for others.But sadly, modern Eastern Europeans, and many in Third World nations think that financial poverty will disappear once they are absorbed into the globalized economy, and dont know that it will cost them their immortal souls

"If men only knew what eternity is, they would do everything to amend their lives."

Europe would be in better shape today if Germany had won WW2.
I stand by my original comment regarding Luciferian cult membership.

The French bishops must have their own modernist version of the Jefferson Bible though with even more parts excised. It certainly doesn't include Jeremiah 31:15.

But in France you cannot say the words Le grand remplace, great replacement of French people with muslim children, do you know the story of Camus?

http://www.catholicworldreport.com/2016/10/13/fake-catholic-groups-and-the-catholic-spring-emails/
By condoning the act of abortion, the French bishops deny that God Is The Author of Love, of Life, and of Marriage and thus deny Salvational Love, God's Gift of Grace and Mercy, which is apostasy.
See Catholic Canon 750

We never hear Pope Francis speak out much for pro-life anti-abortion issues...nor the French bishops. But we sure do hear him speaking out for his precious immigrants/muslims.
But who should be surprised by all this? Francis isn't really a Catholic....and certainly neither are the French bishops!
Damian Malliapalli

He frequently condemns a very worrying aspect of the slave trade which includes the 'importation' into Europe of large numbers of women and men from Asia and India to inflate membership of mainly traditional religious communities.
He also unequivocally condemns the murder of innocents by fanatics of any ideological persuasion.
Credit where credit is due.

I agree with your comment but you & me have never known soul crushing,dirt poor,communist style poverty for multiple generations.

The neo-conciliatiar church continues its treason and continues downward spiral into utter chaos.