Cardinal Turkson: "The Exit Door of Benedict is Always Avalilable for Francis" 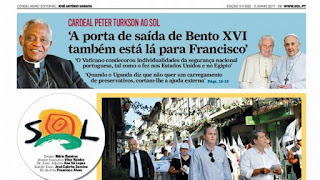 (Lisbon) The Portuguese daily Sol published an interview with Cardinal Peter Turkson on 3 June. The cardinal from Ghana also entertained the possibility of Pope Francis' resignation.
The Cardinal was President of the Pontifical Council Iustitia et Pax and since 2016 has been the first prefect of the new Pontifical Council for the Holistic Development of People, in which he had formerly acted as an advisor.

Excerpt from the interview

The daily newspaper Sol, in the words of Cardinal Turkson, mentions in a meaningful way: "The exit door of Benedict is always there for Francis."
Sol: Is it possible that Francis should follow the example of Benedict XVI. and resigns?
Cardinal Turkson: I do not know if he will. This is a matter between him and God. But it is also true that what Benedict has done has become a part of the institution. This means that the freedom to do so is always given.
Sol: You mean, even if he does not open the door, the door is always there?
Cardinal Turkson: Definitely. This can happen.

Controversial figure of an "emeritus pope"

This continuing "development" of the institution of the papacy by the office of Benedict XVI. and the unusual way he continued to dress himself as a pope, to keep his pope's name and to be an "emeritus pope" is very controversial. Cardinal Walter Brandmüller described the figure of an emeritus pope as a "great danger " for the unity of the Church.
Against the attempted institutionalization of an "emeritus pope," Church lawyers even vehemently raised their voices. For the renowned Church lawyer Giuseppe Sciacca, curial bishop and secretary of the apostolic signatura, the figure of a emeritus pope is " theologically and legally untenable." On the other hand, in May 2016, Archbishop Georg Gänswein spoke in a lecture, which triggered violent reactions ( see also ).

In the past half-year the discussion about a possible resignation of Pope Francis, which he himself has suggested as such, has intensified. The historian Roberto de Mattei, on the occasion of the 80th birthday of Francis, and in connection with the unaddressed Dubia (doubts) of prominent cardinals, wrote on the controversial post-synodal letter Amoris laetitia that in the course of 2017 it can not be ruled out that Francis  may take the bull by the horns and resign
The Argentine weekly magazine Perfil interpreted the words of Francis from 30th May as resignation signals . The Pope had said in the morning sermon in Santa Marta:

"We shepherds must all say farewell. There comes a moment when the Lord tells us, "Go somewhere else, go there, go there, come to me.""

"Francis today nurtured the idea, like his predecessor, to resign his office before his death."

Yes..I have been praying for his retirement and return to his beloved Argentina and for the election of either Cardinals Sarah or Burke

I had a comment to make, but in light of Luciano's sweet comment, I can't make it.
Hopefully it will be just as you said Luciano. That would be wonderful.

I'd be happy to hold the door for Francis when he leaves, and lock it after him so he can't change his mind and come back :)
Damian Malliapalli
(People campaigned for Bergoglio before the conclave....someone should when the tme comes in afew months hopefully, press for the election of a true Catholic and traditional minded man...
I'm not going to name names to jinx things.)

I support the previous comments. However, "it all depends on what the meaning of 'is' is". Francis has an agenda and he will go when it is fulfilled just as Benedict withdrew when his effectiveness faltered.-----If Francis could, he would be the final pope. The writings of Teilhard de Chardin, SJ, are his blueprint. This is known through the writings of Malachi Martin, SJ, who died in 1999 and laid out the agenda of a future Jesuit pope in his book, "The Jesuits". ----This is all about the uniting of church and state and the creation of the people of God. That is why Islam is seen as a "parallel religion" by Francis. They are part of the fabric of the people of God.----This is all about a one world socialist government and the destruction of capitalism which is seen as the source of all evil. Hence, the destruction of the traditional church and the rising of a new Church on the ashes of the old. Bishops such as Cupich, Tobin, and McElroy only portend the new reality of "Amoris Laetitia". "Fornication, adultery, and sodomy" are now seen as acceptable and in the eyes of statements by Cupich as a "virtue" of social justice in the interpretation by PF of "loosening and binding". ref: Rorate Caeli

I think that many people on the Traditionalist wing of the Catholic Church are going to be very disappointed in the Cardinals' selection of the successor of Pope Francis.

I don't think so. There enough Cardinals who hate Francis, and hate the direction he wants to take the Church, that the person elected will be more like Benedict XVI than like Francis. He may be elderly, he probably won't be a 100% traditionalist, but he won't be a radical like Francis. He will surprise people by backing away from nearly all of what Francis stands for, especially what he wrote and has been implemented from "Amoris". He will speak about the Faith, not about politics or environmental concers, or migrants and refugees like Francis does. He will be ecumenically inclined in a more Catholic sense than recent Popes, and will not view Islam as favorably as does Francis.
He won't appoint radicals and people like Tobin,Cupich, etc. They won't be hard liners, but they will be Catholics of a traditional bent. Liturgically, he'll be like Benedict XVI, and even more so. He probably won't celebrate the Tridentine Latin Mass right of the starting block, but he will before he's thru. JUst as Francis has picked progressive, and even radial Cardinals, this man will pick the opposite.....not traditionalists, but people open to all Catholic tradition-including the Mass- and everything else. Moreover, we'll see a lessening in support for and mentioning of Vatican II....not a rejection, just a quiet downplaying of it's significance...almost a "I wish it never happened" type attitude.
So look for someone elected who is probably:
Approaching 70 but not quite there yet.
Possibly an Italian, or a big shocker from a world power country...or from a European backwater.
Someone who gently distanced himself from the policies of Francis without actually condemning him.
Someone who will travel less, and do his work more.
Someone who looks and acts and dresses and speaks in the classical model of a Pope as compared to Francis.
Someone who will take up the papal tradition of using Castel Gandolfo again, much to the dismay of liberals,
Someone who cam sing and speak 2-3 languages.
Someone highly respected by the College of Cardinals, and beloved by faithful Catholics....but someone liberals view with deep suspicion.
That's the kind og Pope I bet we get next time around :@)
Damian Malliapalli

Sorry if I seem negative, y'all, but I see zero chance of Francis retiring. Zero. What would he retire to? Prayer? A life of contemplation, filled with the Divine Office and Eucharistic Adoration? A life with no journalists? A life with no court, no sycophants, no mic, and no power? Are you kidding me? He lives for these things. When he says these things, it is to make conservatives hold back, make them think he might go, make them wait and hope. I say zero chance.

I wouldn't bet on it. I just turned 29, and I'll bet that shortly after I've turned 30, Francis announces his resignation. Or on he other hand, maybe the Good Lord would decide to recall him to his reward before that.
Damian Malliapalli

Beware of what we do not now. He has appointed Cardinals that would vote in another Francis.

He will never resign.

Bingo.
No, not that he would play bingo. Bulls eye would have been a better choice of words.
He loves the spot light. He will never abandon center stage. He is too angry to give up his power to stick it to his adversaries.

There are signs all around the world of the End Times. And that means the False Prophet, the beast with two horns that dresses like a lamb but gets the peoples of the world to worship the Antichrist. But Christ's Catholic Bride be defeated? That's impossible. Martyred, yes. Rescued, yes. But defeated? You do not know the Church. NEVER defeated! The very gates of hell cannot prevail! But to see this you must ask for the "eyes and ears of the heart, not of the head." defeated? NEVER!!

I think that Pope Francis will resign the pontificate in the coming months. Maybe this year. Maybe in 2018. But I think in less than a year we will have a new conclave.

So do I, and the new Pope will be a surprise....a good one.
All the liberal rot of Francis will be running for cover out of the Vatican. Cardinal Parolin (who already sees himself as Pope), will be demoted to scrubbing floors and cleaning Vatican toilets.
Damian Malliapalli

I agree totally. The evil narcissist who is Francis will never resign. When he dies the conclave will be manipulated, once again, to elect a raging Modernist. God only knows where the salvation of the Church lies or when it will come. Call me a prophet of doom if you wish---as the vain and utopian John XXIII dismissed those who warned him about the dangers of a council when society was in the West in the throes of the anti-Christian revolution---but I call it realism.

Yesterday... Pope to Panama Bishops on WYD: "The pope is going to go, me or another, but the pope will go"