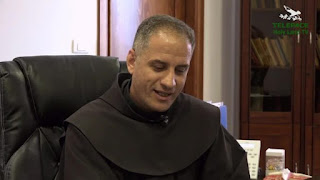 Thank you for this.

Thank you, for sharing with us this very moving story. May God Bless All Soldiers of Christ!

Last February I was on a pilgrimage to Holy Land, before entering Bethlehem we were at such checkpoint....sigh!
What an eye opener was the pilgrimage……Bethlehem in Palestine (where ‘et Verbum Caro Factum Est…’), surrounded by a 25ft cement wall, with electric wires on top. Where Christians and Muslims live together in no men’s land, in poverty, and constant fear. These Christians (Catholics), are true soldiers of Christ, for they willfully stay in the land that Jesus Christ walked, until......

For further reading: ‘In Racist Marxist Israel’, by Jack Bernstein

Indeed Tancred; I echo the above. And may God continue to bless, guard, and guide that wonderful priest.

Great story. Thank you for sharing it. Even demons must recognize Christ.

WOW! HOLY SMOKE! Literally, in the hands of the Lord. "Coming to America".

This is the best post I have ever read on this blog. Thank you.

HEADS UP EVERYONE!!
Here's some big news, even though it's off topic.
Pope Francis (aka Commie Bergoglio), just named 5 more new Cardinals today. I think he must realize that he's going to be dead soon.
At least 2 I know are NOT radical liberals....the Archbishop of Stockholm , Sweden is a Carmelite friar and actually fairly traditional...I think.
But here are their names. As usuall, except for the Archbishops of Stockholm and Barcelona, he picked obscure people no one had ever heard of.
Archbishop Comello of Barcelona (is he good or a rad)
Archbishop Arborelius, OCD, Archbishop of Stockholm
Bishop Zerbo of Mali
Bishop Ling (an Apostolic Administrator in Laos....probably all of 5 Catholics there)
Bishop Rosa Chavez, Auxilary of San Salvador, El Salvador (who will be 75 in September). I have a feeling he's the only bad guy....rad liberal.
Anyone else know of these people?
I do have a feeling, that Bergoglio knows his time is almost up....or else why would he name 5 more Cardinals only 6 month after the last batch of nobodies?
At least people like Rino Fischiella, Bruno Forte, Darmuid Martin etc, etc. were not appointed.
I bet Francis has about another 9 months, then he'll be gone......and he know it .
Damian Malliapalli

Addendum to the above:

Just checked from ABC News website....except for Arborelius, OCD of Stockholm (67).....they're all old (71 to 74). Rosa Chaves will be 75 in Sept.
ABC News states that 1-2 are known to have worked with the poor, or represent persecuted Catholics. But they didn't say any were radicals, like their boss Francis.
Damian Malliapalli
Damian Malliapalli

Yes, faith is what's important . And was that the miracle needed ? x
gramswisewords.blogspot.com

If the Pope is a radical, wouldn't he have appointed radicals? A house divided against itself cannot stand.

What a great testimony. God bless you Abuna Nirwan, Thank you for sharing your miracle story, you'll always be in our prayers.

St. Maria Alfonsina Ghatta, protect our soldiers in the conflict in Marawi. Touch the terrorist group to lay down their arms and opt for peace. Protect the innocent civilians caught in the middle of this conflict. May God bring peace to our land.

Absolutely a miracle! Amazing story, and such great faith!!!

Yes Lord protect all our soldiers who are right now fighting the terrorist and may you cover our country the Phil. with Your most precious blood away from the ISIS like people. St. Maria Alfonsina Ghatta intercede for all our prayers...

Wow, yes we have already died in Christ, no need to be afraid to loose your life...we have already lost our lifes...our times are in His hands, glorious Jesus !

Praise God the Father, Jesus the Redeemer and Holy Ghost the Sanctifier. Thank you Fr. Abuna Nirwah for sharing your heavenly experience. May God continue to bless you abundantly and use you mightily. Prayers & Blessings

Wonderful witness! Bet the demon recognised the Saint of God and was afraid.

I know Anders Arborelius almost in person. I´m Secular franciskan from Sweden. He is fantastic as a person and also as a priest with strong and “real“ thrust in God as a Carmelite friar. He is very humble and spiritual. Pope Francis couldn´t choose better one from Sweden. I guarantee…
And please… don’t be so pessimistic about Francis future… have some thrust in God! Pax Et Bonum, Filip