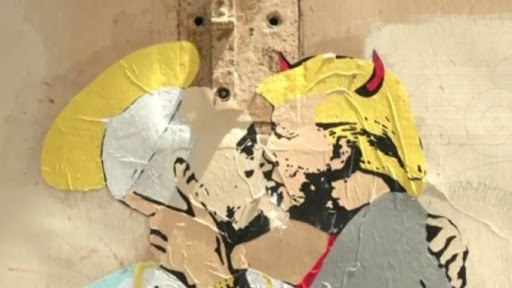 (Rome) A mural painted on a wall near the Vatican, shows a kiss between Pope Francis and US President Donald Trump. Francis is portrayed with halo, Trump with devil horns.

The exact meaning of the wall painting remains vague. The author (s) have not yet confessed to their nocturnal act. Upon the pope's white cassock was written, "The good forgives the devil."  The Mural is signed with "TVBoy". Some guessed behind this an Italian street artist.

US President Trump will visit the Vatican on the 24th of May and receive him in audience with Pope Francis. It is the first meeting of the two heads of state, who had a verbal duel at a distance during the US presidential election campaign.

Trump is participating in Sicily at the G7 summit in Taormina. He will also travel to Saudi Arabia, Israel and Belgium.

In contrast to the precise pasquinata at the beginning of the year, which criticized the administration of Pope Francis, the authors of the nightly Mural are not presumed to be traditional or conservative Catholics.

I'm guessing the author of this particular bit of graffito is a Francis-worshipping freakazoid with a big picture of Che Guevara on the wall of his mom's kitchen.

Give me those posters of a few months ago any day of the week. In fact, another set of 200 is long overdue. Where's Bill Stickers when you need him?

The day Trump sparred with Francis about the wall is the day I become a Trump supporter.

The "artist" has the halo and the horns on the wrong figures; he has them backwards.