"A Real Bomb" -- Pope Benedict Admonishes Francis: The Liturgy is in "Good Hands" With Cardinal Sarah 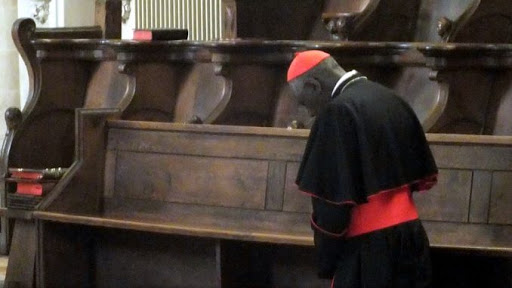 Cardinal Robert Sarah on a visit to the Benedictine Abbey of Solesme. Benedict XVI Pope Francis admonishes that the liturgy of the Church is in "good hands" with Cardinal Sarah.

(Rome) At first sight, what seems to be an expression of appreciation is "really a real bomb," according to Riccardo Cascioli, editor-in-chief of the monthly magazine Il Timone and the online daily Nuova Bussola Quotidiana,

"With Cardinal Sarah the liturgy is in good hands." Signed: Benedict XVI.

The Pope, who had resigned more than four years ago, has signed a direct defense of Cardinal Robert Sarah, Prefect of the Roman Congregation for Divine Worship and the Order of the Sacraments. The Cardinal was appointed by Pope Francis, who thus replaced the Ratzingerian Cardinal Antonio Cañizares, but is considered an "operational accident" in the papal circle. 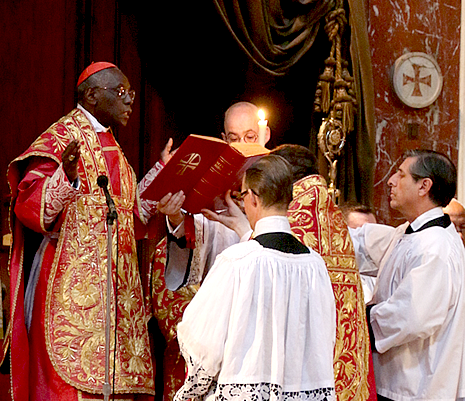 The Cardinal from Guinea represents an even more traditional Church and liturgical understanding than his predecessor, and he is above all more consistent and active. When he became aware of this in the Vatican, Pope Francis began to counteract further appointments and isolate Sarah in his own congregation. After the Cardinal had invited all  priests to face liturgical east again at a London conference, giving up the heart of the "Protestant" liturgical form of 1965/1969, the excitement in Rome was so great that Francis himself contradicted Sarah. It says a great deal about the stamina of the black African that he nevertheless held fast to his request and repeated it afterwards.

"Cardinal Sarah has something to say to each of us"

The "eye-catching gesture" of Benedict XVI. Is found in a commentary on the latest book by Cardinal Sarah "La force du silence" (The Power of Silence), which has not yet appeared in German editions. This letter, which will be included in future editions as an afterword, was published yesterday evening by the American side First Things.

Benedict XVI praises Cardinal Sarah's book on a grand scale. He describes the Cardinal as a "spiritual master who speaks to the Lord from the depths of silence: the expression of his inner connection with Him, which is why he has something to say to each of us."

At the end of his letter the Pope, thanking Pope Francis, expressed his thanks for the appointment of "such a spiritual master as head of the Congregation for the Celebration of the Liturgy in the Church".

This comment is more than just gratitude, according to Cascioli. He wants to protect and defend Cardinal Sarah.

"It is no secret that Cardinal Sarah was effectively deprived of a step by step over the past year, first by the appointment of Congregation members, with the aim of surrounding Sarah with open-minded progressive figures, who rejected the "Reform of the Reform" as described by Benedict XVI, which the Cardinal tried to implement from Guinea; Then the open contradiction of Pope Francis against Sarah's proposal on the direction of celebration; Finally, the reinterpretation of the liturgical texts into the vernacular languages, which hd been entrusted to a commission erected without the knowledge of the Cardinal; And last but not least, steps for an ecumenical Mass which will be undertaken by circumventing the relevant Congregation. "

The "promotion" of Cardinal Cañizares to be Archbishop to Valencia, is a single attack on the pontificate of Benedict XVI. whose efforts were aimed at recovering an understanding of sacredness. Nowhere in the Church is the contrast between a different understanding of the Church clearer than in the liturgy. This is due to the centrality of the sacred liturgy for the life of the Church. This centrality was supported by Benedict XVI. and brought him vigorous criticism from those circles who assert the power of authority over the liturgy.

In the now published epistle to the book by Cardinal Sarah, Benedict XVI offers a reminder:

Therefore the conclusion for Cascioli sounds "like a warning":

"The liturgy is in good hands with Cardinal Sarah, the master of stillness and inner prayer."

Benedict XVI, jumps to Cardinal Sarah's side and make him again the effective head of the worship congregation. There had so far been no such clear intervention in the administration of Pope Francis by the former Pope. Benedict XVI is going on as he has ruled: quiet, reserved, almost shy. Anyone who knows this style of government, and that applies to the entire Vatican, which knows the importance and clarity of this advance. The future epilogue of the book expresses the German Pope's  anxiety about "what is happening in the heart of the Church."

It is no coincidence that Benedict XVI. intervenes precisely in the area which, like no other, has determined his pontificate and is convinced that it will decide the decline or recovery of the Church. It was only recently that, on a question of confusion and divisions in the Church, Georg Gänswein had apparently casually replied that Benedict XVI. follows everything closely in the Church. To this Cascioli said:

"Now we see that he begins to discreetly take a few steps."

The significance of the "sun rising in the east" is not lost on Cardinal Sarah. He is a traditionalist. The problem is that Francis is not. He wants a new church of the laity. Hence, the belief that he may be the final pope.-----The writings of Malachi Martin detail the "cresting" of the priesthood itself. He died in 1999 and stated that many dioceses no longer want priesthood candidates. Benedict is not blameless in this entire scenario. He espoused support for the writings of Teilhard de Chardin and probably abdicated in order for Francis to bring these beliefs into the forefront of Church ecclesiology.------The Church really had no choice than to try something different and dramatic. The problem is with "Amoris Laetitia" and the apparent acceptance of "fornication, adultery, and sodomy" without the label of sin. Eugenio Scalfari has stated through La Repubblica that Francis told him in a well publicized interview in November of 2015 that he no longer "believed in sin" because of the vast mercy of God.

Was Benedict XVI possibly conditionally re-consecrated by a bishop consecrated before July 1968?
I have read before that we the Laity would be very surprised by how many prelates post-July 1968 have received conditional Holy Orders from pre-July 1968 Bishops.
I am not saying this is true but it would explain a lot of the tension we see emanating from Rome.
Take this story for instance.
There are stories like this on a weekly basis.
Could Cardinal Sarah be one of the men who doubted his orders enough to receive them again in secret?
Nothing angers authority more than taking action in private against their written & expressed commands.
I could be way off target and 100% wrong.
Yet,there is more to these weekly soap operas than we are being told.

There are people outside the "sede" camps that hold the new sacraments to be doubtful.

I'd hold out a little more hope for mental healing for wayward sedes frothing at the mouth and roaming the world.

Exactly, Anonymous above. Many in the SSPX, for example. But Tancred's main interest seems to be the insult of traditionalists who still read this blog.

I wish Benedict XVI would act more strongly to suppost those who both liturgically and everything else oppose Francis. It wold throw the Francis camp into caos and disarray, and give strength to real Catholics.....or at least people a lot more Catholic than Francis and company.
But he probably won't. He could have been a strong Pope, but wasn't. He won't be strong now.
Like many people, he hardline words spoke a lot stronger than his follow up actions.
Damian Malliapalli

You feeling OK?
You're starting to sound incoherent.

Anonymous--Please share links or sources about conditional re-consecrations of bishops. Your question about Cardinal Sarah might explain a lot. Consecration in the Roman Catholic Rite is powerful!

Yep, when I want to know what someone with a third grade education thinks, who believes they're a doctor of the Church, that's who I'll ask...

"A real bomb" is dropped by Benedict?! This is only an inconsequential statement as Francis does what he pleases,in this and all matters, and Benedict must/should know it. It has no effect what he says---unless he came out in major public press conference, after consulting with the remaining and decreasing orthodox prelates, and denounced the heresies of Francis; and that he will never do, all in the name of the spurious "unity" (which is no unity at all) used to keep us quiet and paying. Monsters, one and all.

Does anyone know of a conditionally re-consecrated bishop? Where or how do I find information about him/them?

You can check at Te Deum forums. Lots of highly informed sedevacantists there. To my knowledge--no. Even the SSPX quit conditionally re-ordaining Novus Ordo priests who came into their order. That is one of the main reasons many faithful SSPX members left for sede chapels. LeFebvre would be mortified that they quit conditionally re-ordaining. All the new sacraments and rites of Vat 2 are doubtful.

Some sedes now attend Eastern rite Catholic Churches since their rites of ordination, bishop consecration and Mass we're all untouched by the changes of Vatican 2.

Damian----why would Benedict, one of the chief architect is Vat 2, and presider at the notorious Assisi celebrations (he even allowed a voodoo priest during his tenure)-----make a strong orthodox statement about anything. He is simply a much much milder version of Francis. But I would like to think that he is having regrets about it all now.