Prerequisites for the meaning and goals of a monastery in the place no longer given - Eisenstadt Bishop Zsifkovics: "I am very sorry and I am ashamed that in the Burgenland such a thing is possible"

Vienna-Eisenstadt (kath.net/KAP) The Orthodox Church has stopped the monastery project in St. Andrä / Zicksee. As Metropolitan Arsenios (Kardamakis) wrote to the St. Andrä's Mayor  Erich Goldenitsch and the municipal council in a letter, he withdrew the application for re-assignment of the property concerned. Thus, the monastery is definitely not to be built in St. Andrä and also the June planned popular vote is invalidated. The Orthodox Church will now examine all alternatives, according to the Metropolitan, "in all inner freedom" and "the decision is being made without a new location." He was "sad but convinced of the moral correctness of this decision," said Karadamakis.

"Emotions and anxiety were fueled, rumors were scattered, many of them injurious to the Orthodox and the Catholic Church," the letter said. Nevertheless, all were confident that a "Christian monastery would ultimately speak for itself."

The monastery should be a symbol of peace, reconciliation and ecumenism, emphasizes the Metropolitan in his letter. After all, it was a question of providing a "spiritual center", "a Christian place of pilgrimage", to the "orthodox Christians" and to all people of good will in the Pannonian region, which was "a strong symbol for a quarter of a century after the fall of the Iron Curtain of spirit of peace and reconciliation in Europe." Such a monastery is a "sign in the world," a "reminder of the possibility for every person to turn back and return to God." It is also a "continuation of the rich history of the Greeks in Austria," which goes back to the time of the Babenbergs, and even into the Roman era," as Metropolis Arsenios states in the letter.

An Orthodox monastery is a place of communion that tries to live the fundamental message of Christianity "live existentially" - in prayer and meditation, in celebrating the Divine Liturgy, through works of mercy and hospitality, as well as through a simple and respectful lifestyle, which is in harmony with God's creation."

After two and a half years of patient waiting and hope, valuable encounters, and conscientious reconnaissance, one must now realize that this message was not accepted by all inhabitants of Zicksee. "Respect for the other must be observed and allowed for, even if one had hoped for something else."

At the same time, the Metropolitan emphasizes that in St. Andrä over the past two and a half years, in spite of all the irritations, a lot of goodness has emerged that will continue to bring rich fruit in the future. Kardamkis pointed out the many supporters and friends of the monastery project. Together with Bishop Aegidius Zsifkovics, he will now work out ways to make the blessing and the ecumenical message of Pope Francis and Patriarch Bartholomew perceptible and effective for the people connected with the monastic project and the concrete church establishment.

In a first statement, Eisenstadt diocesan Bishop  Aegidius Zsifkovics expressed his deep regret for the "chance of a century" passed by the municipality of St. Andrä: "I regret this and am ashamed that Burgenland can do such a thing. The Metropolitan's decision, as he himself writes, after the patient waiting, hope and initiative is absolutely understandable.Metropolitan Arsenios has informed me of the decision to revamp the location question in a personal, and always friendly, conversation."

At the same time, Zsifkovics assured himself that he was still standing by the side of the metropolitan: "It is great to see with what noblesse and truly Christian attitude metropolitan Arsenios has shown in the face of shameful actions at the community level." 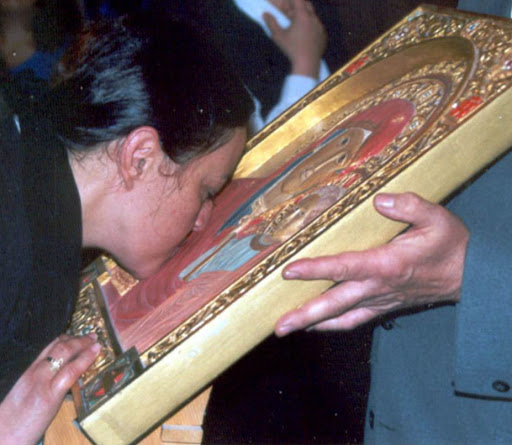 Alternatively, the inhabitants of Zicksee can always settle for a nice politically correct mega-mosque.

President of Austria: "The day will come when we will have to ask ALL women to wear a headscarf!" https://www.youtube.com/watch?v=CxrSYO9N7AY

Is Eastern Orthodoxy growing in numbers in central Europe?