Sacrilegious Theft of Hosts in Ferrara: "I Have Lost My Peace in These Hours" 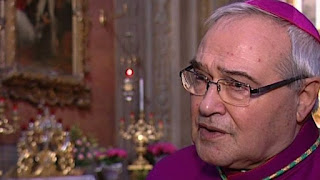 (Rome) Archbishop Luigi Negri of Ferrara had to announce the serious news to the faithful gathered in the cathedral last Sunday: "From a church of our diocese, a chalice with many consecrated hosts was stolen. During these hours I have lost peace." [When sacrileges like this occur stateside, you never hear the local ordinary lamenting them.  It's usually ho-hum time for them.]

At present, the offender (s) are still unknown. Archbishop Negri is one of the most prestigious bishops in Italy. He was the target of an orchestrated campaign throughout Italy in the fall of 2011, alleging that he wanted "the death of Pope Francis". He could not be pushed out of office, which was probably the goal. Still, he has become somewhat quieter. Such slanderous attacks leave scars.
For the time being, "the worst" was to be expected, the archbishop said. He who breaks a tabernacle, and lays hands on the body of Christ, "is capable of all things."

"It is a great pain that hurts the heart and aggrieves. In those hours I have lost peace. " 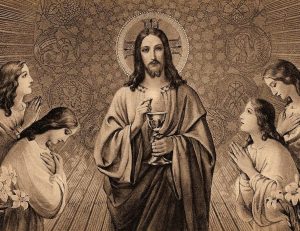 He said of the man who had committed this sacrilege, repeating the words of Jesus: "It would be better if he had never been born (Mt 26:25)." At the same time, the Archbishop called on the perpetrator (s) to return the consecrated Hosts promptly and undamaged.
The sacrilegious robbery took place in the church of Santa Chiara, the former Capuchin convent of Ferrara. In this and other churches of the diocese, there have been at this time an overflowing of atonement and reparation. Archbishop Negri recalled that "there is nothing more precious in the world and in the Holy Church of God than the Holy Eucharist, in which the body, the blood, the soul, and the divinity of our Lord Jesus Christ are truly present."

Atonement and reparation in the entire archdiocese

The archbishop ordered, even on Sunday, "that in all the parishes and religious houses, and to the extent possible in the ecclesial associations and movements, at least one Mass of restitution celebrating according to the Roman p form Pro remissione omnium peccatorum." In addition, a Mass of reparation will be celebrated in Santa Chiara next Saturday, in which the whole diocesan community should participate. The Archbishop himself will celebrate the Holy Mass. Afterwards, a Eucharistic procession will take place through the city.
The Archbishop asked this week to emphasize specifically Eucharistic worship in catechesis, and to promote all occasions of encounter with the Eucharistic Lord.

Tomb of the Atonement Veronica of the Most Blessed Sacrament

The Capuchins had come to Ferrara in 1609, where, thanks to their benefactors, they built the church in honor of the Saint Clare of Assisi. During Napoleonic despotism, their monastery was abolished in 1810, but they were able to return as early as 1817 and re-establish the cloister. In 1987, the convent left the city and moved to San Giovanni Rotondo, where, near the tomb of Saint Capuchin Padre Pio, it moved into a new monastery. In 2012, the church of Santa Chiara was so badly affected by an earthquake that it had to be closed for two years for backup and restoration work.
In the church is the tomb of the Capuchin Veronica of the Blessed Sacrament (1896-1964), whose beatification process was opened in 2015 by Archbishop Negri. She is regarded as a master of the spiritual life who could penetrate deeply into the sufferings of Christ, and even became a part of His mystical suffering as an atonement. She recalled "the importance of a holy life in the struggle of everyone against evil," Archbishop Negri told Archdiocese.
The grave of Sr. Veronica is often visited by the faithful people of Ferrara, and the Order's patroness is called upon to intercede.
Text: Giuseppe Nardi
Image: Ferrara News (screenshots)
Trans: Tancred vekron99@hotmail.com
Link to Katholisches...
AMDG
Posted by Tancred at 3:01 AM

How did they get the key??

Yes! Obviously the parish priest was in collusion!

"He who breaks a tabernacle". It sounds like the tabernacle door was broke into; not opened by means of the key.

Mons.Negri, great man and great Bishop.....the key is always under the altar cloth, everybody knows it, c'mon.....

Unfortunately it's not sarcasm, it's the way in Italy they use to allow the deacons to get the hosts when the priest is out.

I enjoy that he spoke like a priest and a man, and did not say anything like we usually hear, whimpering "oh, we pray for the soul of the poor, deluded person who did this..surely they are confused...". No! He gives them a definite and pointed warning, which is for the good of their souls. I don't know about you, but I've had my complete fill of such weakness and mincing.

They do that all over. It's not hard to crack one of those things. We had an eccentric parishioner who'd break into the Church and the tabernacle so he could get close to the Hosts and see if he could make out Jesus in them.

And my soul is troubled exceedingly: but thou, O Lord, how long?

They crucified Our Lord. They didn't believe. Then this. Violators of the Most Sacred: Life is eternal. The wrath of the living God is real.

This should send the whole church into mourning. Satanist understand that this is Jesus and to desecrate the host is an attack Literally to nail him on the cross again.

It is good to get to know who these good and faithful bishops are in various countries. Let us increase our prayers and sacrifices for them.

I was at a Mass at a Vincentian parish in the Midwest. Before Mass, I witnessed a woman who was going to take Communion to the sick. She went to the tabernacle. There was no genuflection. She just went to the tabernacle and opened it and took out a chalice. She then starting throwing hosts around like she was dealing cards in Las Vegas. --Another individual came up and they each took their allotment of hosts and conversed like they were sitting around a gambling table. There was no longer a Communion rail and then no longer a sanctuary. As one who studied for the priesthood with the Vincentians, I can safely say that respect for the Real Presence is gone.