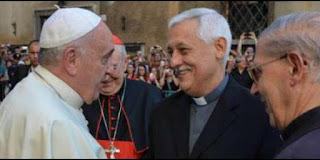 While Pope Francis continues his silence, the Jesuit General has commented on the Dubia (doubts), the controversial post-synodal Letter Amoris laetitia of four cardinals Brandmüller, Burke, Caffarra and Meisner.

On 14 October, Arturo Sosa Abascal was selected 31 Superior General of the Jesuits. The Venezuelan Jesuit has now entered into the public for the first time and does so with a defense of Pope Francis, who also belongs to the Jesuit Order.
So far, the new "Black General", as the Father General of the Jesuits is also called, has  only been known for statements from the distant past. This includes primarily an essay on "the Marxist mediation of the Christian faith" from 1978. Whether he meant, or perhaps still thinks that the Communists "think as Christians think" is not known. At least it resembles Pope Francis, according to the recent interview with Eugenio Scalfari, on November 11 published by La Repubblica.
The Superior General of the Jesuits was interviewed by the Vaticanist Luigi Accattoli for the weekly supplement La Lettura the Corriere della Sera which appeared yesterday. "We can not resign ourselves to this world of injustice," the title says, referring to a quotation from the 31st Jesuit General. In the interview, the 68-year-old Venezuelan also explains "the roots of the new mission of the Church".

The Cardinals have either not understood the pope, or ...


The new Superior General has entered the dispute about the confusion surrounding Amoris laetitia to help the beleaguered pope. The support is doubly anchored. The reigning pope himself is Jesuit. His Order is also bound by a fourth, special vow of loyalty and obedience to the Pope. The Jesuits form a kind of praetorian guard of the first Jesuit of the Church's history, who sits on the papal throne.
What the Jesuit General Sosa Abascal says of the Dubia of the four cardinals, should reflect on the matter, should reflect what the Pope thinks about it. Father Sosa admits only three possibilities of which there is no room for papal self-criticism: the Cardinals either did not understand the pope, or they were playing an evil game. If there is "ambiguity" in some passages of the Pontifical Letter Amoris laetitia,  which could be the reason for the confusion and conflicting interpretations of the past few months, Sosa Absacal can not detect it.

Luigi Accatoli: What do you think of the letter of the four cardinals, including the Italian Carlo Caffarra, who asked the Pope to clarify  five "doubts" on the letter Amoris laetitia? Francis has not yet replied, and they have published the letter. Are you concerned about these developments?
Arturo Sosa Abascal: I'm not worried. These four have taken the liberty of the word to which the Pope had invited them to do. I like this happening. In our language, as Jesuits, it is said that it is necessary to know the opinions of all in order to make a real distinction. Of course, the game must be loyal, if someone asks for clarification, because he has not understood, we move within the framework of loyalty. It would be different if someone used the criticism as a tool for an advantage, or asking questions cause trouble."

And you don't get to have an opinion either. said...

There IS no defense of the pope. Now go sit down and shut the phuk up.

Protestants, who are sometimes right but for the wrong reasons, are probably talking about how the "Black Pope" is defending the "White Pope." lol

Just another sycophant whose services are being employed to intimidate and defend the indefensible.

I think And... may be correct in saying that this is not a defence of the Pope although I do not like the way he has expressed. Are you able to show where the General said he did not see any ambiguity in AL?

...or course, it's been about 130 years since an EssJay actually wore a cassock (let alone any other type of clerical dress), so, never mind.

Well, he, like Francis, isn't; a real Catholic either....so it doesn't really matter who/what he supports. I (and many I know), ignore them both.
A relative in India (Mumbai) tweeted me that once the ideology of the new Jesuit leader was known, lots of Jesuit seminarians and aspirants in India started resigning! HAHAHAHAHAHA! Good riddance Francis.
Damian Malliapalli

When I read "Father General" it makes me think of the movie "Catholics" with Martin Sheen.(1973)

The protestants obsess about the Jesuits, it's their favorite boogeyman, responsible for everything from global finance to war to food production. Here from our Catholic perspective we just laugh and think "that decrepit pathetic band of liberal fruitcakes?"

But hey, it's their fantasy. Would that the Jesuits actually WERE still the original Jesuits who defended a holy pope and were the shock troops of the pope.

In a couple of forums they have mistakenly thought I was a Jesuit. After explaining to them that you would need to be a priest to or brother to actually "be" a Jesuit, I then say "if it's Jesuits like Saint Ignatius, yes, count me in and label me this, if like today's Jesuits..don't dare call me that."