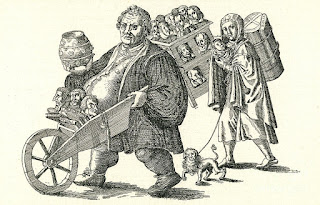 Edit: if only the Lutheran Church would turn back the clock and have a celibate clergy, perhaps they might not be having a vocations crisis?

Travemünde (kath.net) the shortage of clergy in Germany is apparently not a purely intra-Catholic problem. Even the Protestant churches are threatened with a dramatic shortage of clergy, as the evangelical news agency "idea" reports. The number of evangelical theology students has been alarmingly low, said the President of the Federation of Protestant pastors in Germany, Andreas Kahnt (Westerstede / Oldenburg) in the context of the German Pastor Day in Travemuende. According Kahnt there were 26,000 students of Protestant theology in 1986; currently there are about 2,400, reported "idea." Compared to the impending retirement of baby boomer pastors, this number is not sufficient, says Kahnt.

Maybe it's time for them to think about the final redde rationem, and sola scriptura atque sola fide it's not enough to be safe hereafter.

This is also why allowing divorced and civilly remarried or even married priests will NOT stop the hemorrhage of people from the Church. Only the Truth can set us free and only the Truth will draw souls.

Organized religion is failing dramatically throughout Christianity. To his credit, Francis is trying to come up with a solution by organizing the laity. I just have a problem with his methods.

No church is going to come up with anything that will fill up the pews with people interested in Christianity, except, if they return to the Gospel, the real one, and teach Catholicism as it was once taught.
But one has to believe it himself, first.

I have a problem with Francis's intentions---as well documented by his traitorous words and actions.

These evil men have created the 'crisis' - like destroying the seminaries through the infiltration of heretics and queers, and then, they propose the 'remedy' - married priests, women priests, etc. A 'new mass' which they had to have to suit their 'new theology'. On & on... but God will NOT be mocked!

People can sense sanctity the sweet odour of Christ draws people to Him ,like a bee to honey.They have stripped the Altars ,removed the Tabernacle ,do they think people go to Church to see them "perform" ? They go in search of the Sacred ,and in its place they are offered the profane .

What does Pope Francis have to do with this article-the shortage of evangelical (Lutheran) theology students?? Do you look for any opportunity you can to bash the Pope?

Satan's War on The Holy Sacrifice of the Mass. http://www.torchofthefaith.com/news.php?extend.1418.1

Francis is only trying to destroy the Church, not build it up through the laity. What organization of the laity is JBQ talking about?! The lay sodalities, Catholic Action, a myriad parochial associations no longer exist, and the grand Order of Malta is under attack from Francis himself. If JBQ refers to the sanctuary meddlers who defile and trivialize the liturgy, then, yes, the laity have been "organized" in a desecration, ultimately clericalist effort very much controlled by clerics who now sit in their preposterous presidential chairs where the Blessed Sacrament in the Tabernacle used to be and smile with the smarmy, moronic smile of the Modernists. Some organization of the laity! The Church has probably never been more clericalist than since Vatican Council II, when the proper roles of clergy and laity are confused and often inverted---the very definition of "clericalism." Wonders never cease when it comes to the ignorance and naivete of so many Catholics; is it something in the baptismal waters or just the result of the poor catechesis from a lazy, indolent clergy?

There are never enough opportunities to denounce Francis the heretic and traitor. His treachery should be shouted from the rooftops.