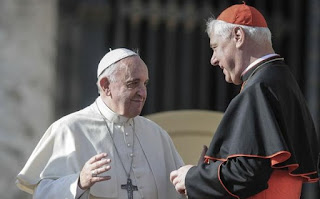 (Rome) The images are repeated with shifted accents. In 1986 Pope John Paul II attended  the first World Prayer Meeting Religions for Peace to Assisi that was organized by the Community of Sant'Egidio. The prefect of the CDF, Cardinal Joseph Ratzinger, his closest collaborator, refused and remained in Rome.
In 2016 Pope Francis attended the 30th world prayer meeting in Assisi. The prefect of the CDF, Cardinal Gerhard Müller, remained in Rome. Those present did not notice the absence. Anyway, it seems, in contrast to 1986, to have disturbed no one,  the least of all, Pope Francis.
Cardinal Müller took a position in his own way to the battery of problems by taking a position on the issue in Assisi. He traveled to Regensburg for another anniversary. Ten years ago, on 12 September 2006,  Benedict XVI. held his historic Regensburg speech about the unity of faith and reason, with two specific areas: western relativism and Islam.
Cardinal Müller described the speech as his "finest hour"."Prophetic"  where Benedict XVI. analyzed Western society in crisis and Islamic terrorism.
Jorge Mario Cardinal Bergoglio, the then Archbishop of Buenos Aires, saw the matter differently and distanced himself. "I do not identify myself with the words of the Pope," he did this through his press spokesman Don Guillermo Marco for Newsweek. When a Pope does not recognize the "values of Islam," he destroys in twenty seconds, that which was built in the last twenty years, was his indictment of the Regensburg speech by Benedict XVI.
The Vatican was not pleased with this stab and demanded an explanation. Bergoglio was to distance himself from his the statements or those by his press secretary. The primate of Argentina was ready to do neither to do one nor the other. Half a year later, as even the Argentine government criticized Marco for something else, the speaker was been replaced. Officially,  the archdiocese spoke of a "restructuring in the press" of the archdiocese "to optimize the relations with the media." Bergoglio had not distanced himself from his criticism of the Regensburg speech.
Guillermo Marco, whose star remained undimmed with his superior, now elected pope, at the beginning of 2016, appeared in the first and most controversial "video of the Pope."  The video caused outrage because of its syncretistic message that Marco made even stronger in an interview with " abstruse theories." Whith that, we come full circle to Assisi IV.
Text: Giuseppe Nardi
Image: MiL
Trans: Tancred vekron99@hotmail.com
Link to Katholisches...
AMDG
Posted by Tancred at 2:12 AM

If this is the case, to whom were the representatives of different "religions" praying to at Assisi?

What is the true story of Assisi? When the first Assisi took place St. John Paul ll gave strict rules that no Catholic could pray with those of another religion. When he found out later that some Catholics did pray with those of different religions it is said he was furious. The intentions was explained that it was representatives of all peoples of the world begging God for peace. The Pope may have taken pictures with the Orthodox and others but he did not engage in prayer with them. It was said that the then Cardinal Ratzinger later understood what Assisi was about and he did accept it. There were atrocities on the part of liberal Catholics but this should cause no strain on the real intentions of Assisi. One atrocity was some Franciscans who gave entry to Hindus to the Portiuncula, not a small matter!

JPII ordered crucifixes removed from the Vatican when he hosted a concert commemorating "The Holocaust." So, it may have "been said" that he was "furious" over the goings on at Assisi; actions, however, speak louder than spokesmen!

“The event of Assisi” he said, “can thus be considered as a visible illustration, an exegesis of events, a catechesis intelligible to all, of what is presupposed and signified by the commitments to ecumenism and to the inter-religious dialogue which was recommended and promoted by the Second Vatican Council.”

He sure sounds furious.

He allowed every false religion participating in Assisi to have a room on Vatican property to be converted into their own private worship room.
St.Paul stated the Gods of the Gentiles (nonbeliever's) are Devils.
With that in mind,JP2 freely allowed & encouraged Devil worship on Vatican property.
By silence and encouragement, he willingly participated in Devil worship.
The $64,000 question is can a Roman Catholic Pope allow and participate in Devil worship yet still retain his office and remain Pope?
I belong to a sedevacantist chapel operated by a small order of priest's and 2 Bishop's.We aren't affiliated with the SSPV but we share their approach.
Keep the pre-1950 Roman Catholic faith alive during an emergency & leave the major important questions to Our Blessed Lord Jesus Christ.

"I do not identify myself with the words of the Pope." - Cdl. Bergoglio on Pope Benedict XVI's Regensburg address.

If that can be done, we can surely say the same thing about Pope Francis's "Amoris Laetitia."