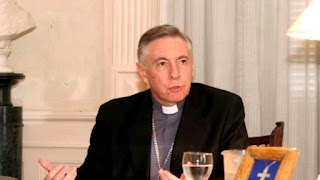 (Buenos Aires) The bergoglian Argentine bishops, the greater the confusion seems to be (see The contradictions of the Church "the open doors": Argentine President Must not be Godfather ). The Archbishop of La Plata, the historic opponent of Jorge Mario Bergoglio in Argentine episcopate, criticized in a column the widespread "culture of fornication." His brother bishops distanced themselves from him.

The Case Macri and Political Antipathies

The newborn son from a Catholic  family with many children was denied baptism in Bergoglio's Archdiocese of Buenos Aires because - according to an Argentine tradition, the sponsor for the seventh child is the President -  who since December 2015, is the incumbent president Mauricio Macri, a remarried divorcee, who had been rejected as godfather.

Macri, who displaced the previously ruling (left) Peronist from power last fall, has ever since been the validly declared main enemy. It's a conflict that seems to have been transferred to the Church. That Pope Francis would have preferred the Left-Peronist candidate in the presidential palace, is an open secret.  A donation of the new president to the Pontifical University Foundation Scholas Occurrentes was returned in April's return mail to the donor. In other words: The donation came from the wrong (political) area, with which one would not even have anything to do in terms of good works. It was a veritable papal disavowal of a head of state.
The same had happened already in July 2015 at the Pope's visit to Latin America. While the Catholic Church leader met with the left presidents of Ecuador and Bolivia, dazzling the mind and   also expressed this in front of the photographer, Francis went against the conservative President of Paraguay on a collision course. He made unheard of public criticisms of ​​the head of state to thousands citizens and the highest dignitaries of the country and they were also completely groundless allegations . It would be difficult to express (political) sympathies and antipathies more outwardly.
No wonder then that Argentina's bishops and pastors, at least those who want to be particularly bergoglian, follow the example of the Pope, and in turn disavow President Macri. The reel of rejection of Macri as godfather was opened at the Cathedral of Buenos Aires, the long-term "domestic church" of the current Pope, where he made his successor Msgr. Mario Aurelio Poli, a close friend and even created him a cardinal.

The Case of Archbishop Aguer

Since Cardinal Bergoglio had become Pope, he has been undermining the "hawks" by his new appointments, stripping feathers. But still the pugnacious archbishop of La Plata is in his office. In May 2018 he completes his 75th year.
In the daily newspaper El Día of La Plata Archbishop Aguer writes a regular column in which he knows how to swim against the current, as well as in his most recent column of August 23. Under the title "La Fornicación" to English "Fornication," where he raised his voice against "lewd culture", sexuality and love "trivialized".
What does he mean by a "culture of fornication," the archbishop explained with a practical example. He cited the Brazilian press, which had calculated that in just 17 days an average of 42 condoms were used by each participant at the Summer Olympics. Sexual intercourse with multiple partners, who are often perfect strangers, is a behavior that are in themselves, "animalistic," said the Archbishop. He used a popular Latin American gutter expression.
Among other things, Msgr. Aguer criticized the gender ideology and "other unnatural relationships." The Archbishop took up the cudgel for lifelong marriage in mutual love and respect between a man and a woman, and for the ability to bond, which sees destroyed contra naturam  through the fornication.
In this context, the archbishop engaged clear criticism of aberrosexual relationships and the possibility for them to adopt children.

The "trouble of the Church"

Archbishop Héctor Aguer drew with this column not only the wrath of liberals and the aberro-associations, but also his brother bishops.
In the issue from August 28 the newspaper La Nacion, the Argentine "house organ" of Pope Francis, published the article "Trouble in the Church on the Nature and Language of Msgr. Hector Aguer". The article "reflects," says the author, the "reaction of the Church" (!) to the column by Archbishop Aguer.
The article quotes three bishops who take a position against the Archbishop of La Plata  but remain anonymous.
"The same bishops who insisted in a conservative position in the case of Macri, represented in case Aguer the exact opposite, and therefore a liberal position," said Secretum meum mihi .
The distancing from Archbishop Aguer is established by the first anonymous bishops with "his language" and "his method."
The second anonymous bishop is quoted as saying that the column of Msgr. Aguer "is not representing the concerns of the Church, especially in a moment like this, with its much more important problems."
A third anonymous bishop reiterates the statement that it is indeed important that the people to know what the Church teaches on sexual morality and marriage, "but now tries to mediate teaching in a context of respect for individual freedom of believers."

THE DIABOLICAL BERGOGLIO EFFECT!!! I have defended the Church for decades, after reading this article I shocked myself! Upon reading the article I found Archbishop Aguer's statements to be out of place, almost like he was speaking in a strange way. This reaction of mine is totally against God. Is Bergoglio influencing people so much that they fall into his errors? God Bless Archbishop Aguer. May God help me never to fall into such darkness of soul again. Why do I write this? To warn that Our Lady said, "Even the elect will be misled into error". Prayer and Penance are the answer.

"Now tries to mediate teaching in a context of respect for individual freedom of conscience". This is "subjective morality".