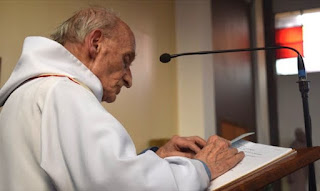 The first martyr of Islam in Europe has a name. He is Abbé Jacques Hamel, murdered while in the parish church of Saint Etienne du Rouvray in Normandy celebrating  Holy Mass on July 26. Two Muslims invaded the church out of homage to Islam, and after taking the few faithful present hostage, they cut the priest's throat and seriously injured another of the faithful. About the identity of the aggressors and their anti-Christian hatred which drives them, there is no doubt. Through its press agency Amaq the Islamic State (IS) described the two attackers as "our soldiers".
The name of Jacques Hamel joins the thousands of Christians who burned alive, crucified and beheaded each day out of hatred for their faith. The bloodbath on the 26th of July is still a turning point, because this is the first time happened in Europe and thus casts a shadow of fear and shock to the Christians of our continent.
It is not possible to guard the 50,000 religious buildings in France and an equally large number of churches, parishes, pilgrimage sites and chapels in Italy and other countries. Every priest has become the object of a possible attack, which are intended to further increase if only because of the effect the  imitation of such acts trigger.

"How many deaths does it take, how many severed heads for the European leaders to understand the situation in which the West is?"

This question was posed by Cardinal Robert Sarah after the recent attacks. What must happen, we add, so that the confreres of Cardinal Sarah comprehend the appalling situation in the College of Cardinals, including the Pope, which is now taking place not only the West, but in the universal Church? What makes this situation so horrific is the policy of starry eyed idealism and false compassion towards Islam and the enemies of the Church. Certainly, Catholics must pray for their enemies, but they need to be especially aware first and foremost, they have such. And they have not to limit themselves in  praying for them.They also have the duty to fight them. The Catechism of the Catholic Church teaches, when it says that self-defense is, "not just a right but also a grave duty, when responsible for another life or responsible for the welfare of his family or the community," ( no. 2265). It also says:

"The protection of the common good of society requires that the attacker is unable continue to harm" (n. 2266).

Pope Francis said he was "deeply shocked about the fact that this act of senseless violence took place in a church during a service, a liturgical act, which asks for the peace of God", but yet again neglected to name the killers by name. The silence of Pope Bergoglio corresponds to the Muslims around the world who do not condemn with a loud voice, unanimously and collectively, crimes committed in the name of Allah by their coreligionists. Even French President Francois Hollande spoke in his speech to the nation on Tuesday evening of a war of France against the Islamic State (IS).
During his pontificate, Pope Francis spoke with great haste about some saintly figures of the 20th century like Oscar Arnulfo Romero and Don Pino Puglisi, who were certainly not killed out of hatred for the Catholic faith. On 12 May 2013 he also canonized in St. Peter's Square, the 800 martyrs of Otranto, who were beheaded on 11 August 1480 by the Turks because they had refused to deny their faith.  If Pope Francis were to announce the opening of a beatification process for Abbé Jacques Hamel, that would be a peaceful but strong   signal to the world that the Church is willing to defend Her identity. But if he continues in giving the illusion that there could be an ecumenical agreement with Islam, he will repeat the mistakes of those shameful policies that sacrificed the victims of Communist persecution on the altar of Ostpolitik. The altar of politics is quite another than the holy altar on which the bloodless sacrifice of Christ is celebrated, and with this victim Abbé Jacques Hamel had the grace on July 26,  to unite with it by giving his own blood.
* Roberto de Mattei , historian, father of five children, Professor of Modern History and History of Christianity at the European University of Rome, President of Lepanto Foundation, author of numerous books, most recently appeared: Vicario di Cristo. Il primato di Pietro tra normalità ed eccezione (Vicar of Christ, the Primacy of Peter Between Normality and Exception.), Verona 2013; in German translation last: The Second Vatican Council - a Previously Unwritten History, Ruppichteroth 2011. The intertitles are from the editors.
Translation: Giuseppe Nardi
Image: Riposte Catholique
Trans: Tancred vekrpon99@hotmail.com
Link to Katholisches...
AMDG
Posted by Tancred at 9:49 AM

What an honor to receive the palm of martyrdom on the feast of Saint Anne. Fr. Hamel Ora pro nobis!

So today in Poland the pope states it is not religions at war, but the world at war?? Then he states (quote from AP article), "I only want to clarify that, when I speak of war, I am really speaking of war," he said. "A war of interests, for money, resources, dominion of peoples."

"I am not speaking of a war of religions. Religions don't want war. The others want war," he added.

Why is he in such denial? Islam is a religion is it not? Who are being persecuted, beheaded, burned, etc.?? And why are they? Why are there refugees?? What are the refugees fleeing? Seems to me be about religion...Islam - believe or else you infidel! This holy priest slain while saying Holy Mass, nuns taken hostage, seems to me to be about religion. It is Christians who are under attack by fanatical jihadists, as well as Muslims who do not adhere to their commands on following their "religion." There were Muslims who were slaughtered when they could not recite verbatim passages from the Quran. So that was not about "religion?"

I ask too, "How many deaths will it take" for people to wake up, and recognize the evil that is running rampant? And in the USA, how much longer will people be so complacent because these horrific acts are not taking place in their neighborhood? I'm sure those in Europe, especially with so many recent events in Germany & France, they didn't think it would happen to them; but it is now a reality for them. Our president has the same problem as does our pope, denying what the truth is, and who are committing these evil deeds, and why they are.

The madness of the ecumaniacal New Church shows itself yet again.

A block away, the Yahia mosque of Saint-Etienne-du-Rouvray was inaugurated in 2000, constructed on a plot of land donated by the Catholic parish where Tuesday’s attack took place. http://www.breitbart.com/london/2016/07/27/normandy-jihadists-mosque-built-land-donated-catholic-parish/