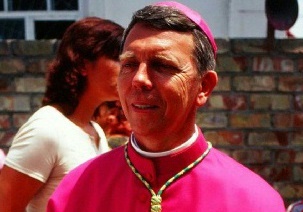 The German colonies in Odessa on the Black Sea emerged in 1803. The colony Kandel was founded in 1808. The colony Speyer was founded in the following year 1809. The Messmer family moved after the collapse of Soviet rule, like many Russian-Germans in the Federal Republic of Germany.
Kyrgyzstan is currently home to around 1,500 Catholics. These are  especially the descendants of those deported under Soviet rule from German and Poland. Bishop Messmer was the first diocesan bishop of the Central Asian country. 75 percent of the more than five million inhabitants are Muslim, 20 percent Russian Orthodox. The rest include the Catholics who are overall the descendants of Germans from Russia, which are partly Catholic, partly Protestant.
With the death of Bishop Messmer, there are six priests in Kyrgyzstan including four Jesuits and two diocesan priests. Most are German and Polish origin.
Text: Vatican Radio / Giuseppe Nardi
Image: catholic-kyrgyzstan.org
Trans: Tancred vekron99@hotmail.com
Link to Katholisches...
AMDG
Posted by Tancred at 1:00 AM

Recently heard radio show about the 5 Central Asian republics.
Sounds boring but it was actually fascinating.
Kyrgyzstan is one of those countries I wished I would've visited during my 20's.

Why? It's just another Muslim country not to set foot in.
I have always found it weird to say the least, (and granted many Muslim countries are dirt poor), but the ones that are not...and there are a lot...it's weird that many of the people still prefer to live in villages that look like they are right out of the 14th century B.C.
Look at Morocco, Tunisia, Algeria, Egypt for example.

Its actually mostly athiest/secular thanks to soviet union. Of course there's still terrorists amongst the practicing islamics that are a minority

Look at the Bronx. Look at Detroit both looking like Plague ravaged wastelands of the fourteenth century.

The point was thatif someone came back from Ancient Egypt, say at the time of the great Pharoah Ramses II, or the sawn of the pyramid age in 2600 BC, they would feel quite at home in most of the Muslim villages in Egypt or Morocco.
Of course, they would wonder who the freak is climbing a tower to scream at the top of his lungs 5x a day, but other than that, they'd recognize the place. The modern villagers have not advanced 1 inch from B.C. days.
Damian Malliapalli

I will tell you why I should've visited these 5 Central Asian republics tomorrow.I work a lot of hours don't have time at the moment. (Will be a lengthy response)

Im reading a two volume biography right now about napoleon (by robert asprey, quite good), anyways im at the point where napoleon gets to egypt and the french are not only horrified by living conditions (they mention near neolethic in countryside) but terrified how if any male westerner wanders from militaru formations they are promptly sodomized by the locals