"March for Life" Embarrasses Pope Francis -- Abortion Is Only a Question of Economic Systems? 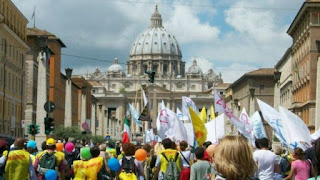 (Rome) The sixth March for Life in Rome was a renewed success which gained by tens of thousands of participants to again bring the right to life of unborn children into public visibility. Katholisches.info reported on the use for a ban on abortion, but also about the monosyllabic, with the Pope Francis, the tens of thousands of lives protectors saluted. The Vatican expert Sandro Magister now writes of a "repellent Peter's Square" for "those who march for life".

"In the US it's a classic, in Rome Pope Francis would love not to see it"

"In the US, the March for Life at the White House in Washington is already a classic. But in Rome at St. Peter's it's not. Pope Francis does not like to see it show up. That was clear at how badly he treated it was at the 'Regina Coeli' on Sunday, 8 May," said Magister.

"At the conclusion, after which he paused for applause, first the faithful of Rome, then to those of Poland, Francis said leadenly and gravely: 'I greet the participants of the march for life'. But he tried to cover up their applause by the next words, which he repeated twice in the text, which he read to give gestures and smiles immediately afterwards to a group of Roman scouts and a group of the Firm Lingen from Genoa. The latter he even rewarded with spontaneous, friendly words: 'You are loud, Genoese!'"

The March for Life , which took place for the fifth time in Rome, was attended by Cardinal Raymond Burke, Archbishop of Ferrara Negri and Bishop Schneider of Astana. "Three churches representatives of whom Francis is notoriously allergic."

"Osservatore Romano also practiced shunning the whole initiative, not even dedicating a single line to it," said Magister. It's a hush which was followed by the Pope's daily in recent years. The day after the 4th March for Life in 2014 the Osservatore Romano gave space to the Freemason-friendly philosopher Marco Vannini to deny the resurrection of Jesus Christ, but not the March for Life.

"Why this aversion by the Pope" - abortion for Francis important only in anti-capitalist reading?

The Avvenire, the daily newspaper of the Italian Episcopal Conference, controlled by the Pope's confidant Nunzio Galatino, included a short report on 10 May that was hidden only on page 11. "To give an indication of a minimum of papal benevolence for the march, a letter from Msgr. Angelo Beciu, had to serve as the substitute of the Cardinal Secretary of State, which was not addressed to the March for Life in Rome, but to those in Portugal, which takes place on 14 May." The march in Rome was not even honored with a "standard message," said Magister.

"It remains to be understood why Pope Francis cherishes such a dislike, although he has condemned abortion on several occasions," said the Vatican expert.

"One indicator could be the context that the Pope connects these two convictions. It is in the context, of what he calls, throwaway culture '. His real enemy within is not those that kill the young, innocent lives - they deserve mercy - but the international economic powers that have caused such killings out of idolatry and greed."

Therefore, according to Master, "is that outside of this vision of Jorge Mario Bergoglio, the March for Life becomes an obstacle to dialogue with postmodernism. Not a benefit to the image of the Church, but a burden."

If Magister's evidence agrees, this will result in a whole series of questions. Should it be possible that Pope Francis will reduce the killing of unborn children only to a social issue, and thus attempt to force it into an anti-capitalist reading? You change the economic system and there will be no more abortion? The millions of dead children and the millions of women and mothers, allow this mass murder, desire, seek, ask, and all those who urge pregnant women to have an abortion, are only victims of structural injustice and an unjust economic system?

2017 will in any case will bring no embarrassment for Francis, for him to ignore the March for Life. The organizers had first transferred it to a Saturday. This was consciously chosen in order to discontinue the common prayer with the Pope on St. Peter's Square which has been ongoing since 2012. Text: Giuseppe Nardi image: Marcia per la vita

Abortion is not the rotten fruit of an economic system (in the Pope's opinion of course: capitalism) since the babies murders were much more numerous in the horrendoud times of the Soviet Union than they are currently in the US.

How long before the "Francis Effect" leads Cardinal Wuerl pulls the plug on the D.C. March for Life?

Pope Francis is a big zero.

The March For Life was founded by Nellie Gray, who was Protestant at the time it was begun. It's not specifically Catholic, and Cardinal Wuerl has absolutely no authority to "pull the plug" on it. In addition, he has reached retirement age and will likely be replaced at some point in the near future.

I watched the Pope's Angelus live on May 8th by accident, flipping my cable station channels, I came across EWTN which carries the Angelus blessing live every Sunday.
When I saw the HUGE crowd I thought to myself...oh, that's more than the meager crouds I usually saw for Francis...ugh.
But now I realize that 9-% of that huge crowd wasn;t there to see Francis after all....it was the Rome March for life. HAHAHA! For a moment I was disappointed that Francis got a huge crowd . I should have know better!

By the way, I forget what secular poll did it, but there's big headlines that the Pope's popularity in crashing...he doesn't make the top 10 most admired any more. :)
Damian Malliapalli

"But now I realize that 9-% of that huge crowd wasn;t there to see Francis after all." That's why he doesn't like the march, it isn't about him or his agenda.

How poisonous are these articles? They are like rumors spread not to solve anything but to twist and mold everything one can just to bash the pope. I've stumbled across these regarding every pope I've lived during, when are Catholics going to leave the bashing of the pope to the protestants?

Magister is an internationally known accredited journalist who's been covering the Vatican for more than 30 years. His observations don't fall in the rumor category, and Bergoglio's hostility to the Pro-Life movement has been noted increasingly by people like Michael Novack, hardly a traditionalist.

You sound like a junky who resents people who don't imbibe his brand of poison.

Maybe the waters of Europe are imported from Flint, so to speak. That is one concession I pass on.

I feel like throwing up after reading this. Just when I think I can't be further disgusted by this man's actions this comes along. How long Lord?

This Pope is limited by his narrow South American experience which includes Liberation Theology and only dealing with the poor.

He has to go and this debacle, this hideous tragedy of a pontificate, can never be repeated. The Cardinal electors need follow him out the door.

"Sanctity of life will be held in derision, even by those who outwardly proclaim it.. ..For in those days, Jesus Christ shall send them not a true pastor, but a destroyer."

We ,True Catholics , have to use BOMB to cast away this faithless Pope WITH POWERFUL BOMBs OF ROSARIES.
Viz. B O M B = B eads O f M ary a B illion

It is nothing but Chastisement of God for our Sins like abortions, contraceptions , LGBT etc. Humanly impossible to drive out these faithless Hierarchy, in Rome and in European countries / Germans - enemies within the Catholic Church , wolves in Sheeps' skins. Prayer and Penance are our ammunition . Will a Catholic Army be raised ?

Why not all traditional minded Cardinals,Bishops and Priests through out the world FIX A DAY during the year and offer TRUE SACRIFICE OF MASS (TLM) and beg God the Father have mercy on us and to end the current confusions by the Pope Francis ,the destroyer of Holy Catholic Church.
May be Mass on FIVE FIRST SATURDAYS for this intention.

Poverty is never an excuse to destroy the life of a beloved son or daughter residing in their mother's womb.