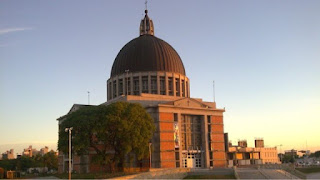 (Buenos Aires) The Apparitions of San Nicolás de los Arroyos in Argentina have been recognized. The competent diocesan bishop, Msgr. Hector Sabatino Cardelli, recognized the supernatural character of the events on Sunday, May 22.

San Nicolás de los Arroyos is located approximately 250 kilometers northwest of Buenos Aires and is the capital of a separate diocese of the ecclesiastical province Rosario. Since 1983 the Mother of God has appeared to a mother, Gladys Quiroga de Motta. The seer, a simple woman who is now already a grandmother, has the stigmata of Jesus.

Gladys Quiroga de Motta submitted to obedience to ecclesiastical authority from the beginning. Annually an apparition of the Blessed Virgin Mary appears in  the same day. Most recently, 250,000 believers gathered on this particular day.

Gladys Quiroga de Motta lives in utmost seclusion and spends most of the day in prayer. The reigning Bishop of San Nicolás de los Arroyos, Msgr. Hector Sabatino Cardelli have already celebrated Holy Masses and led processions to to the place on the river Paraná, where a large church is built. The order for this have been received from the Blessed Mother by the stigmatist.

A spring was found said place, as indicated by the publication. Church history is replete with such visions, where the Blessed Mother appears to the  faithful, demands the establishment of a church and names the exact building site. In such places arose pilgrimage sites which drew numerous faithful to pilgrimage and pray.

White Scapular for those who suffer in body and soul

The white scapular of Gladys Quiroga de Motta is recognized by ecclesiastical authority, which is designated according to the Marian apparition in a special way for those who suffer in body and soul.

Father Carlos Pérez, the spiritual director of the stigmatized, has always been convinced of the authenticity of her statements. So far, more than 1,800 messages have been made, which were given to the seer according to  instructions. Their publication has been authorized by the former bishop of San Nicolas, Msgr. Domingo Salvador Castagna, bishop of 1984-1994. Bishop Castagna said at the time: "I firmly believe that it is an event of the Virgin Mary."

Now his successor has recognized the supernatural character of the apparitions of San Nicolás. A few days ago, Bishop Cardelli led the second diocesan annual pilgrimage to the new Church of St. Mary of the Rosary. On this occasion he announced the official recognition of the phenomenon. The Church had examined the event in the past for more than 30 years and checked it accurately. It was in followed in a process by the prescribed critea of the universal Church. The Chur h considers three questions in such events: "Is a phenomenon of natural origin, it is a work of the devil, or it is of supernatural origin?" The answer to these questions is in the specific case, constat de supernaturalitate. The apparitions are definitely given of a supernatural character. 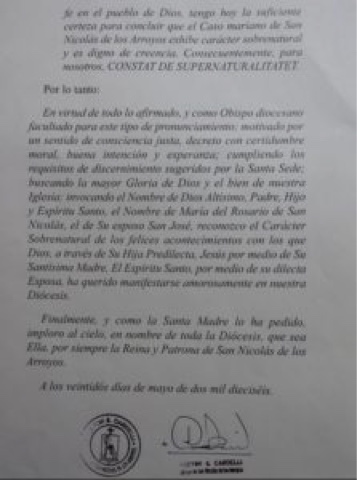 Recognition decree of the Apparitions

The assessment of such a phenomena is the responsibility and authority of the local bishop. As such, Bishop Cardelli, speaks with the judgment of the Church. The Apparitions of San Nicolás de los Arroyos are now among the officially recognized supernatural apparitions by the Catholic Church. The messages have been recognized as authentic. The recognition by the Church does not mean that believers have to believe in the messages or the authenticity. They are not part of the divine revelation.

The decree of approval of Bishop Cardelli ends with the words:

"Finally, and has just as the holy Virgin Mother of God asked, I beg to heaven on behalf of the whole diocese, that she may be forever the Queen and Mistress of San Nicolás de los Arroyos."

The Diocese of San Nicolás de los Arroyos was established in 1947 by Pope Pius XII. from parts of the former archdiocese of La Plata and what is today the Archdiocese of Mercedes. It has 422,000 Catholics, which corresponds to 92 percent of the population. There are 101 diocesan and 13 religious priests active in the diocese.

The number of priests has risen since the mid-80s, when the apparitions began, by 70 percent. Initially there was one priest to 7,100 faithful, now there is one for every 3,700 faithful m.

I received a copy of the book in 1991 as a Christmas present.

The messages are quite short and are typical calls to prayer and conversion, stressing the Rosary.

There are some warnings interspersed about chastisements if mankind does not convert.

The alleged seer stated that, if this generation does not listen Our Lady, it will perish. She also stated that the devil's time is short.

The messages also ask for a church to be built at the site, which has already been done.

The book is published by Faith Publishing Company.

Will the Church now publish the messages as not all can afford to buy books. Also by Church publication more people can hear the voice of Our Lady

I never saw anything earth shattering in any of the claimed messages or anything that is not already generally known.

They are more or less meditations and calls to constant conversion. Some of them are personal to the alleged seer.

Here is an example:

My daughter, this is my time! That is why I long for the arrival of each child to my motherly arms, and I tell my children: Ask yourselves nothing, only let the Mother arrange everything.

The enemy has already been attacked; his end is near, and he is using, as a last resource, human weakness and pride, but I shall vanquish him. I have already started to overcome him.

Now the world must know that the Mother of Christ will overcome Satan because by Her side will be Her Son's humble ones.

May my message be known.

Glory be to the eternal God.

A whole legion of live ones!

This is the Catholic Church. Clearly not to your liking.

The messages can be found at this site
http://www.oocities.org/ritapaz/firstmessages.html