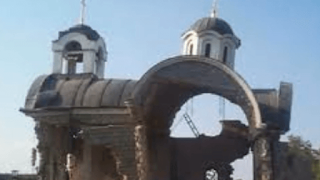 (Rome) The Holy See of the Roman Catholic Church and the Moscow Patriarchate of the Russian Orthodox Church will jointly rebuild the churches destroyed in Syrian war.

A joint working group of the Vatican and the Russian Orthodox Church have travelled to Syria and Lebanon to gain an impression of the extent of the devastation. Consultations were also held on site. This was recently announced by the Moscow Patriarchate with a press release.

The reconstruction is primarily concerned with the sanctuaries and monasteries which were destroyed by Islamic jihadists and in the course of fighting. Soon will they will start generating an accurate list of Christian shrines. Using this list, we'll establish priorities together, so Moscow.

The Catholic-Orthodox delegation that traveled to the Middle East includes the Catholic Archbishop of Moscow, Msgr. Paolo Pezzi, and the Orthodox priest and theologian Stephan Igumnov, the Secretary for Interfaith Relations of the Moscow Patriarchate. The two church officials were accompanied by representatives of the Pontifical relief organization Church in Need.

Too bad Pope Francis is destroying the "C"hurch in a much different and, I believe, more insidious way than the Muslims.