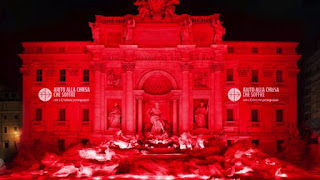 (Rome) This coming April 29, the famous Trevi Fountain in Rome will turn red as "the blood of Christian martyrs". This action seeks to raise awareness of the plight of persecuted Christians in different states.
The initiative for action comes from the Catholic aid charity Kirche in Not. Meanwhile, numerous Catholic organizations have joined the effort.
ACN published a short video to announce the action.The pictures show the horrors of the persecution of Christians. Pope Francis can  be heard in the original sound with the words:

"Our brothers shed their blood just because they are Christians."

The Trevi Fountain is the largest fountain in Rome and one of the most famous in the world. It is regarded as one of the main attractions of the Eternal City.
In 1640 the contract was issued by Pope Urban VII. for drilling the well  to Gian Lorenzo Bernini, but it was only begun in 1732.
After an extensive and thorough restoration,  the fountain was reopened five months ago.
Among visitors to Rome, it is customary to throw a coin into the fountain, which guarantees a return to the city. The coins are fished out once every year by the City Council, most recently since the restoration work began in 2013. From this point forward, this money goes to Caritas. In 2013 there were 1.2 million euros.
Link to Katholisches...

A Shadow Church is capable only on aping the world's cheap political stunts.

Who'n'the hell is NOT aware of the Mahometans icing Christians?

Hell NO raise a Crusade...

Who's going to lead that?

Colouring a fountain red? A little tacky if you ask me. Previous generations of Catholics had better ideas on how to resist the Islamic jihad.

The Blackwater guy says he can defeat ISIS with a Brigade Task Force. All we need is a gofundme for 150 million or so.

How is putting red lights on a fountain helping the abused,tortured,helpless,persecuted, Catholics in Asia and Africa?

Great question as the last Catholic govts were defeated during WW1.

That's not even true, nor is your major premise that a Crusade would have to be led by a Catholic state. Franco led a Crusade against the Bolsheviks, for example. and there's nothing stopping anyone from organizing another one.

Name one Catholic government today currently.
(yes it's true the last Catholic govts were defeated in world War 1)
Franco kidnapped children of the opposition,shifted them to a life of endless countless orphanages,and told the kids in later life their parents 'abondoned them'.
You want the likes of him to lead a crusade?
So if you believe the Catholic Church is the one true faith of our Lord and Savior Jesus Christ,how is a heretic led Army going have the blessing of our Lord and Savior Jesus Christ?