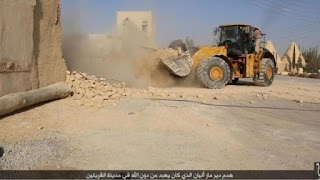 (Damascus) The Syrian city of al-Qaryatain is in close proximity to the ancient ruined city of Palmyra. Last weekend it was recaptured by the Syrian army. The city, which before the war had about 18,000 inhabitants, is inhabited by Sunnis and Christians.

The jihadists of the Islamic State (IS) had taken al-Qaryatain early August, 2015. On August 21, was devastated by shelling and a bulldozer, the 1500 year old monastery Mar Elian.  The destruction was recorded by the Islamists as a video and published on the Internet.

As the video shows,  the jihadists broke into the  grave of the eponymous saint Julian of Emesa. The doctor  had suffered martyrdom here in 312.  The monastery was built above his grave. The Islamists wanted demonstratively to destroy the Christian past of the place. The relics of the saint are still in the grave, as noticed by the prior of the monastery, Father Jacques Murad. He had returned on Monday with the Syrian army to the city. The monastic community of al-Qaryatain belongs to the Monastery of Saint Moses the Abyssinian.  The Monastery of St. Moses of Abyssinia is on Syrian slope of the Anti-Lebanon.

The visibly moved Prior finds the relics

In the years before the war the repopulation of the convent of St. Elian (Julian) had been successful there. Father Murad had been captured on 21 May 2015 by the Islamists, as they raided the monastery. Only on October 11 of the same year, he managed to escape from the hands of the Islamic State (IS).

Visibly moved and overjoyed Father Murad realized that the relics of the martyr were still present. "They can now be collected and reassembled. Thus, the life of Christians is beginning in the area again," he said as quoted by Fides. "The fact that the relics of Mar Elian are not lost, for me is a great sign: He wants to tell us that he does not want to leave this monastery and this holy ground. We know that the saints are in heaven. We can always call for their intercession. "

Father Murad had made studies in recent years on the relics. This enabled him to immediately identify the mummified remains.

"A great sign of blessing for our whole Church"

On Wednesdays, a priest of the Syrian Catholic archeparchy of Homs and monks of Monastery of Saint Moses the Abyssinian came to  al-Qaryatain to evaluate the status of the destroyed monastery. "They will collect the relics and bring them safely to Homs," said Fr. Murad on Tuesday. "The old sanctuary was razed. The new church and monastery were burned and shelled. We will build the sanctuary and the monastery again. Then the relics of Mar Elian again be returned. By the grace of God new life will flourish around the grave again. This will be a great blessing sign of our whole Church. "

I-m pulling for the Syrian army that protects the Syrian Christians!!

The living Messiah is truly here...testimnonyofthetwowitnesses.com
I promise with all of my heart , all breath I take my life and soul,
Knowing what that promise means, which I don't take lightly
that Holy Father Pope Peter the last and his wife Mary Romanus
are truly the brother and sister of Christ! When writing to Pope
Peter and Mary ones heart and soul is dicerned right from the
thrown in Heaven! He is the living earthly Messiah also He
Is the great Catholic monarch along with King Jesus Who
IS coming back at His third coming! Out of Jesus great love
and mercy the unborn babies of abortion are coming back
too they have true parents who want them and love them
Oh Holy Father and Mary Romanus are so good!
The little flock as long as they Do all that King Jesus
and our True Pope growing in virtue and humility and
Obediance and persevere in doing so will not only
Reverse age but shall not die also! Mary was never
Separated fro God , She was there from the start
, She was United in the sufferings and death of her son
and She is now United in the hearts of Holy Father
Petrus Romanus and His wife Mary through the
because the Sacred Hearts are right in them!
Sadly to say most all will reject then and rehang
Jesus on the Cross again through the rejection
of His True brother and sister! They people
must choose between the Word which never
changes and which is living write in His Testimnoy
and Heart of His two witnesses and true little flock
Or between the anti Christ who will mimic all that
Jesus did in His life! Obama and Francis are the
two beast spoken of in the bible and it has
Been revealed from Heaven Obamas third term
is fixed!

Jesus let me hold Him right in my dream He
Is so beautiful and handsome so peaceful no
words can describe! He was good to me
To let me experience a communion with the
unborn babies ! Hell is very real too I disobeyed
His Testimnoy I experienced the excruciating
pains of hell! It was so scary!

The little flower answered my prayers too
about His Testimnoy! I truly hope you
Pray about it too before you Jesus turn
Jesus away righting you ,
His eyes get so sad like hurting ones
best friend from what I saw in my dream.

Most people didn't want Jesus as a infant
Most didn't want His death and sacrifice
and sadly to say they are doing it all over
again by spitting on Him and His true brother
and sister and true little flock! He is hidden
in His Word for they can't handle His Just
Anger! Oh my gosh it truly take a lot to
have Him get to Just Anger! Our nation
Flunked as a whole , and until are nation
Humbles itself to His two witnesses and
Repentance they shall reap what they so!
For Obama is not going to end tell the people choose!