Latin Church in Mossul Blown Up by Islamists 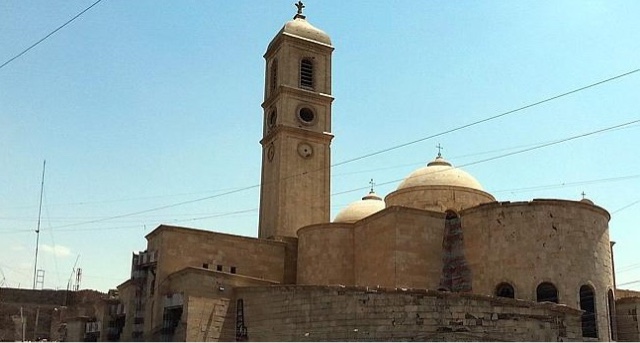 (Bagdad) On Sunday,  24. April the Latin Church in the old city of   Mossul was destroyed by explosives.

The church which is entrusted to the Dominican Order under the name of "Church of the Miraculous Mother of God" and because of its bell tower clock, popularly known as the "Clock Church".

According to an unofficial statement by the Chaldean Patriarchate, the attack was accomplished by the   Islamic State (IS) which has controlled the northern Iraqi city since June 9, 2014.

Sources which  Fides cite, suggest that the jihadists of the  des Islamic State (IS) had been plundering the area around the church. Shortly after that, the church was blown up.

The  official statement by the Chaldean Patriarchate described the "pain" over the destruction of the church.  Iraqi politicians were asked to "quickly resolve this" and direct a "real national reconciliation," which, "will cease any further spreading of terrorism."

The Latin Church with its clock tower church, was  the image of the old city of Mosul. The tower was a gift of the Empress  Eugenie, the wife of Emperor   Napoleon III. of France.. It has not been ruled out that this church's connection to France is what made it a target of the terrorist attack.

Edit: so glad this was ironed out by Nostrae Aetate.

Has the BoR anything to say about it, or he's too busy in videochat and singing with some old italian singer?

Take that Francis! That is, if you care at all. Any Catholic with a few active brain cells understands how this false religion or psychosis called Mahomatenism and the Truth of The Roman Catholic Faith are totally antithetical.

Or maybe he's praying a Novena for the conversion of the perpetrators. Don't denigrate him and try to act like a Christian.

He's not doing much of anything.

I guess that for the likes of "southwillriseagain" Jesus the Lord was not acting very Christian when he told off the Pharisees on numerous occasions and threw physically the money-changers from the Temple. What they propose is a namby-pamby, effeminate pacifism that never has been part of Christian praxis---except among heretical sects, such as the regnant Modernist one. Edmund