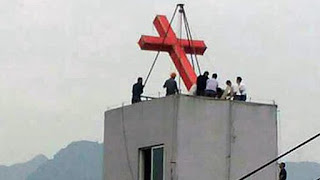 (Beijing) Ding Cumei is the wife of Protestant underground pastor Li Jiangog.  The couple was desperate to prevent the destruction of their official Church in the People's Republic of China. One of the workers had been given instructions: "Bury them. I'll take responsibility."  The pastor's wife died under the rubble of the church demolished by demolition excavators. Her husband was still able to get out of the rubble.
The gruesome murder took place last April 14 in Zhumadian, Henan Province. Local police arrested two construction workers. Details were not disclosed. The authorities seem to want to avoid any "damaged image" by a cover-up of the bloody incident.
Pastor Li Jiangong and his wife Ding saw the excavator roll in, which had been commissioned by the government to tear down their church. An investor had expressed an interest for the land on which the church stood.
The couple stood against the demolition excavators. A worker  ordered his team "to bury" them. .According to eyewitnesses, the backhoe operator had pushed the couple into a pit which was then filled with demolition material and earth. Pastor Li was able to free himself, but could not come to the rescue of his wife.
Ever since the Communist authorities launched an anti-Christianity campaign in 2013 of "urban cleansing" and "economic improvement", 1,700 Christian symbols and dozens of churches have been destroyed just in Zhejiang Province. Church destruction also occurred in the provinces of Hebei, Hubei and Henan. In spring 2013 Xia Baolong, the Communist Party Secretary of Zhejiang Province, declared that there are "too many crosses."
Christians see a Kulturkampf of the communist regime against Christianity which has  experienced significant growth by conversions in the region.
Text: Asianews / Giuseppe Nardi
Image: Difesa del Popolo (screenshot)
Trans: Tancred vekron99@hotmail.com
LInk to Katholisches....
AMDG
Posted by Tancred at 1:50 AM

The killing of this woman of course is a horrible crime of murder and torture, but you must remember that the type of Christianity she represents is false Christianity, heretics.
I majored in History in college, and now teach it at the highschool level. I have always had a passion for history, both learning and teaching. Right out of college, seven years ago, and for afew years after I was a model/fitness model, and worked in NYC and LA for many catalogues, stores (Macy;s, LL Bean,etc.) and made a lot of money fast, but chucked it to go back to school, am getting my M.A., and teach highschool. Hopefull in 10 years (when I'm 38 or so) I can teach at college level.
But I know a good deal about China and Chinese history. It is among the most fascinating and impressive civilizations thathas ever existed. Culturally, theirs was perhaps the most advanced in the world (as well as medical science), up until the very early 19th century.
And it was in the 19th century that these Protestant missionaries (mainly from the USA and Britian) infiltrated much of China, coercing and browbeating thousands of Chinese to accept their version of Christianity. At the same time these fundamentalist Protestants stormed thru Buddhist and Taoist temples, smashed priceless statues and other treasures to pieces, persecuted and even killed Buddhist monks and nuns, and basically told the Chinese that their culture and civilization was garbage, that they were backward pagans who needed to accept their version of Christ. The contemptuous way these Protestant missionaries treated the Chinese people, in addition to the unfair aand even horrendous criminal business practices other European nations practiced in trading with China caused millions of the Chinese to see Europeans and Christianity as a threat. Largely, the treatment of the Chinese people by the missionaries sparked what is know as the Boxer Rebellion....(1900-1901....a grassroots movement among tens of thousands of Chinese to force the Europeans and Christian missionaries out of the country.
The government of the Dowager Empress Cixi was too corrupt and weak to effectively deal with the Europeans, an d their military was basically medieval compared to France, Britian and the USA etc.
But it was basically the abuse the Protestant missionaries heaped on Chinese culture and civilization that triggered the fall of the Ch'ing Dynasty, and which ultimately brought the Communists to power in China.
The Chiense Protestant "Christians" in China today are the only religious group in China which refuse to exist peacefully with their neighbors who are not Christian. They continue to insult the ancient Buddhist or Taoist traditions of China, and of course preach undisguised bigotry against the Catholic Church and Catholic Chinese.
If the Chinese government is shutting down these Protestant Churches, good riddance. The Protestants are aggressive, obnoxious, and insult other groups and openly defy the government. Killing of course is wrong....but these Churches deserve to be shut down.
Damian Maliapalli

They have launched a government program for 'indigenous' faith (Buddhist), i seen on the news awhile back. And the Mohammedan is coming from one area i was reading about, and getting recruits.

Buddhism , Confucianism,and Taoism (Daoism) are the two main religions of China. Daoism and Confucianism are native to China...founded there. Buddhism was imported to China by Buddhism missionary monks in the 5th-6th centuries AD. from India.
In China today, the largest branch of Buddhism (Mahayana) is approved by the government and is flourishing in many new monasteries. Taoism and Confucianism are also having a renaissance in China.
The only form of Buddhism that is persecuted...or under severe government oversight is the Tantric/Lamaist form of Buddhism that was/is originally native only to Tibet, but was established in parts of China, particularly in Sichuan Province and also elsewhere, under the original patronage of the Ch'ing Emperors. The Emperor Chien Lung (d. 1799) was especially partial to Tibetan Buddism, and established Tibetan Buddhism monasteries throughout much of China, and in Beijing inself he established a monastery.
Tibet was always considered a part of China, from the Ming dynasty (1330's to 1644), the Ch'ing (644-1911), and today. Even in Imperial times, the Emperor stationed garrisons of troops in Tibet....but as China weakened in the 1800's, the Chinese presence was only a token force.
Tibetan people were/are very patriotic, and loyal to their country as an independent nation, and fiercely loyal to the Dalai Lama, who is the spiritual and political leader of Tibet. Because of the link between nationalism and the Dalai Lama, the Communist Chinese have always been particularly harsh in their crackdowns on Buddhism in Tibet. It is probably persecution of Tibetan Buddhists you saw on television or that which was reported, because of their loyalty to the Dalai Lama.
Catholicism is a largely underground Church in China, except for the government sanctioned Catholic Church. Aside from Tibetan Buddhists, no group has suffered more than Catholics in China...especially those loyal to the Vatican. Loyalty to a Vatican and Pope such as Francis is of no value today, but Chinese Catholics should be admired for past heroic sacrifice for the Faith and for the Pope in years past.
These Protestants deserve what they get however, for they look down on Buddhists, Daoists, Confucians...and Catholics as pagans, and superstitious people. Moslems have always been viewed with suspicion in China, but they have usually lived in area very far from the centers of power (Central Asia....close to Afganistan, etc,) The fundamentalists Christiains deserve what they get.
Damian Malliapalli

The saddest part is that she died a heretic. ☹

Maybe it was Taoism, rather. Pardon me.

I don't think it was Taoism. They are very well regarded in China proper, as are Buddhists(other than Tibetan Buddhists).
It was probably Tibetan Buddhism that was being harassed/persecuted by the Chinese government. They have suffered a lot and deserve our respect. The fundamentalist Christians do not.
Damian Malliapalli

Buddhism and Taoism are false religions too. The Catholic Faith is the true religion.

Lefebvre died a heretic? You don't know what heresy is or who is afflicted by it. Archbishop Lefebvre was a true Catholic bishop defending the Faith when all cowards were cowering to the Modernists---and you, Long Skirts, writing very bad poetry. Edmunc