Cardinal Lehmann of Mainz to Resign 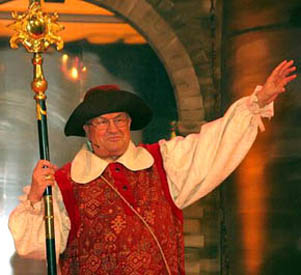 Edit: hie was among the conspirators against Pope Benedict XVI who also illegally conspired (latae sententiae, anyone?) to get Pope Francis elected according to a gloating Austen Ivoreigh.

Roman Catholic Diocese of Mainz: There was little doubt that Pope Francis would accept Lehmann's obligatory request to resign his diocese of Mainz.

Mainz (kath.net/KNA) After almost 33 years, Cardinal Karl Lehmann takes leave of his post as bishop of Mainz. There was little doubt that Pope Francis would accept Lehman's mandatory resignation from the Diocese of Mainz on Friday. Thus the chair of the Diocese of Mainz will be vacant on the day after Lehmann's 80th birthday on May 16 on.

The Diocese reported that an official decision will only be published as a rule, on the date of the resignation according to the Roman custom. Lehmann himself had repeatedly stated in recent years that all officials in the Catholic Church, with the exception of the Pope, should finish at on their 80th year. That is an iron law.

On October 2nd, 1983 Lehmann had been consecrated in Mainz Cathedral Bishop and introduced in his episcopate. for over 20 years - 1987 to 2008 - he was President of the German Bishops' Conference. In February 2001, Pope John Paul II. elevated him to cardinal.

The cardinal is considered as a bridge builder and man of dialogue. He is a cosmopolitan, life-affirming Christianity and for ecumenical openness. He enjoys the highest reputation in the Protestant church, in politics, economy, science and culture. Among the numerous awards Lehmann has received include several honorary doctorates and the Federal Cross of Merit with Star and Sash. He is a winner of the Karl Barth Prize and the Romano Guardini Prize as well as the "Order for Combating Deadly Seriousness". He is also an honorary citizen of Mainz and honorary member of the football club FSV Mainz 05.

Lehmann, born on 16 May 1936 in Swabian Sigmaringen, was an assistant of 1984 died renowned theologian Karl Rahner. As a professor of theology, he taught first in Mainz and later in Freiburg, before he became Bishop of Mainz at 47 years. At that time he was the youngest Catholic bishop in Germany. His episcopal motto is "State in fide" (Stand firm in your faith).

As a member of the College of Cardinals, Lehmann took part in the conclave in April 2005 from which Pope Benedict XVI. emerged, and the conclave in March 2013, which elected his successor Pope Francis.

According to the official, but not confirmed counting, Lehmann is the 102nd Bishop of Mainz. He certainly is the 87th successor of the famously "Apostle of the Germans" St. Boniface, who was Bishop of Mainz from 746-754. Lehmann's 80th birthday will be celebrated on May 16 and so on Whit Monday, with a service in the cathedral and a ceremony in the nearby Rheingoldhalle. (C) 2016 CBA Catholic News Agency. All rights reserved. Photo Cardinal Lehmann (c) Roman Catholic Diocese of Mainz
Posted by Tancred at 8:37 AM

Francis is allowing Lehman to resign?

He probably has someone worse in mind to replace him.

Very likely one buffoon to be succeeded by a worse one. Marcus

I agree with Archbishop Lefevre about the new rite of consecration being doubtful.
A doubtful Sacrament is to be treated as if it's invalid.(basic Catholic Catechism knowledge)
With that stated,this man is a valid Roman Catholic priest but a highly doubtful "Bishop" and "Cardinal".