Basilica of Saint Vincent Turned into Nightclub for Easter Sunday 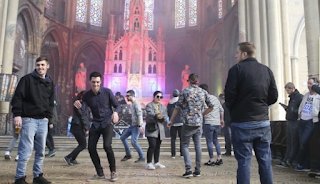 Edit: very different rites were held this Easter at the Basilica of Saint Vincent in Metz, France. The ancient Gothic edifice dating back to the 14th century has been hijacked by a nightclub promoter for the purpose of turning it into a dance hall with the approval of Metz's current secular rulers.  Like goblins and imps, the youth and some not-so-youth of the city have misused these halls which were once the earthly home of God almighty, as a nightclub from 8am to 10pm.   The event's promoter, Irenaeus Sutter, pretends innocence and insists that he does not understand the negative reactions, which include about 20% of those hundreds who've contacted him so far via e-mai.

Some suggest that since this building has been deconsecrated that it may be used for profane and immoral purposes.  Naturally, we disagree.  It is unfortunate that there aren't apparently enough Catholics in Metz remaining to stop such sacrilegious acts.

Riposte Catholique is one of the first Catholic blogs to post on this that we know.

The French State controls and supports church properties, an unfortunate state of affairs in effect since 1905.  It's often been far from clear that French secularism appreciates the hallowed nature of these places and that even when effectively removed from regular use, still have the symbology of the Christian faith, which opportunists love to mock in the spirit of the age.

Shameful and despicable. God will not be mocked, look for an increase in Mohommedan attacks.

Where kneeling down
Their Savior adore
The people said "...that
We'll pass."

There are no bells
To remind the people
Pray your souls
To prime.

And now at six
The “mourning” hour
Bells die with each passing
Minaret.

I was in the Basilica of St Denis in Paris today and Versaille afterwards. I was struck by two things 1. The Basilica should be a place of pilgrimage for all Catholics particularly French ones visiting Paris and 2. The inscription above the Palace of Versaille ' for all the glories of France ' this should read for the greater glory of God ? However all becomes clear when you go inside the palace and there hangs the wall to wall painting of Napoleon 'crowning himself' as Emperor !

Psychology. Could Napoleon have invented the first selfie ? Lol

God gave you msuch a beautiful talent. May you always use it for His glory and the good of souls.

Looks at these souls in the picture, do they have any idea of the hell coming up for France in the next few years?

I made a pilgrimage to St. Denis is 2011. The high altar has a librarian information desk. There I was on praying on my knees at the statues of Louis XVI and Marie Antoinette, martyrs for the faith. I didn't imagine they were used to seeing a Catholic actually praying in the church which they have tried their best to make into a museum.
John

The only condition that matters to man is his present condition.

With all the chaos going on in Europe,I thought they'd be on their knees,praying,fasting,etc..begging the Lord for blessings.