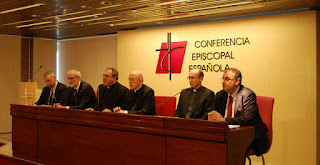 (Rome) Is the Spanish Episcopal Conference forging the path that the whole Church will soon be using to follow the Apostolic Letter Amoris Laetitia? Yesterday  Archbishop Carlos Osoro of Madrid, the deputy president of the Spanish Bishops' Conference held a press conference yesterday. He was accompanied by the rector of the seminary of his archdiocese, a professor of the Pontifical University of Salamanca, José María Gil Tamayo, Secretary General of the Episcopal Conference and two Jesuits who played an important role.

Ambiguities of "Amoris Laetitia" bring Archbishop of Madrid to embarrassment

One wants to "value" the Exhortation of Pope Francis explained Archbishop Osoro the reason for the press conference. In this, however, it became clear that there is considerable unrest among clergy since Amoris Laetitia and there are numerous requests from priests asking how  they would have to act now.
After 55 minutes of the theoretical explanations involving the controversial aspects of Amoris Laetitia, there was ​​a detour, then came the first question from journalists and it was aimed immediately on the ambiguities in the papal document.  How do you respond to the "possible paradox" that a priest could grant the divorced and remarried communion and another does not.
It was one question that brought Archbishop Osoro and the others present to clear embarrassment. No one wanted to answer the question until finally the Jesuit Pablo Guerrero, pastoral theologian at the Pontifical University of Comillas, gave an answer that none of the others present contradicted, not even Archbishop Osoro.

"That would have put this decision at the discretion of the priest. But this is not the case. The Pope has asked in a clear exercise of synodality and communion with the entire College of Bishops of the Church Pastors of each diocese, to appoint the priests of his diocese a number of general and equal criteria in order to avoid arbitrary judgments. No priest should feel as if he is the owner of the word of God," Father Guerrero.

"New Style of the Magisterium" not divided into "good" and "bad"

All participants of the press conference stressed that the Church's teaching "does not change". Pope Francis had  proposed to the bishops, however, "a new form of application" of this doctrine. The papal letter "recommends," said Father Julio Martinez, Rector of the Pontifical University of Comillas and the second Jesuit at the conference table, not to divide the world into "Pure and Impure" and not in "good and bad".

"The full recognition of the Magisterium is not inconsistent with an internal Church debate. We are facing a new style of  Magisterium. It is about the harmonious coexistence between salvation and morality in order not to fall into a religious rigor."

With this the Spanish Episcopal Conference seems to acknowledge the softening of the indissolubility of marriage.  Because with the aforementioned "universal and equal criteria" that should be given to the priests in guiding, implicitly recognizing that there are situations in which the indissoluble marriage is still dissoluble. At the same time, the Episcopal Conference is trying to prevent anarchic situation  that according to Amoris Laetitia, every priest could decide at their own discretion. The Episcopal Conference is expected to draw the question of "general and identical criteria" for the clergy itself.

"Tactical finesse" of the Pope?

Prior to the publication of the post-synodal letter was, depending on the position, the worry or the hope was cherished that Pope Francis could adopt a general rule that it would accept the divorced and remarried to communion so that recognizes the divorced and remarried and lifts the indissolubility of sacramental marriage. That would have been guilty of heresy in the eyes of the defenders of the marriage sacrament. He did nothing of the sort  and everything else. The "tactical finesse" ( Secretum meum mihi ), as now emphasized by proponents and critics, lies precisely in the absence of a general rule. Thus Francis has introduced no new rule, but even more has not confirmed the existing traditional rule. He proves to be a "door opener", without being challenged on it.
In "pursuit of synodality" as the Jesuit Guerrero put it at the press conference in Madrid,  Francis put the iron in the fire by the convening of the Synod of Bishops on Marriage and Family. With Amoris Laetitia he is pushing the now-hot iron to the bishops, which specifically, since their introduction by the Second Vatican Council, is what Episcopal Conferences are meant to do. Through the unrest  borne into the church, among the faithful and the clergy, the bishops are obliged to adopt this general rule, to which the Pope has renounced.

The question is shifted to 130 Episcopal Conferences and 3,000 Dioceses

Pope Francis has burst the door open so that every Episcopal Conference and every diocesan bishop may adopt criteria to allow divorced and remarried to communion. The traditional doctrine must now be confirmed individually by each Episcopal Conference and every diocesan bishop. The probability that there will be at least only one Episcopal Conference or a bishop who softens the indissolubility of sacramental marriage is based on approximately 130 global Episcopal Conferences and Synods of Bishops and nearly 3,000 dioceses is quite likely. In any case, a question valid for the unity of the entire world Church is a question to be answered a hundred times.
The Spanish Episcopal Conference feels the actual or even perceived pressure of the faithful and priests. Uncertainties caused by Amoris Laetitia were palpable at the press conference in Madrid. Neither has it been consistently reaffirmed if the indissolubility of marriage actually means indissolubility, neither has it been affirmed that this logically leads to a categorical no to admission to the sacraments public adulterers, as it has always taught the Church.
Text: Giuseppe Nardi
Image: Religion Confidencial (Screenshot)
Trans: Tancred vekron99@hotmail.com
Edit: just a small point of disagreement.  This has been ongoing for a long time since the Episcopal Conferences were put into effect, and the tragic results in terms of the implementation of the Bugnigine Missal are clear for anyone to see who cares to. It reminds us of Father Malachi Martin's explanation of the "superforce" as that diabolical grip on the Church, freezing even some of the most fervent defenders of the Church into general inaction and lassitude.
Link to Katholisches...
AMDG
Posted by Tancred at 10:14 AM

Oh Lord hear my prayer!
And let my cry come unto Thee!

Grant, Oh Lord, that we Thy unworthy servants
May be delivered from the scourge of Pope Francis.
As he was thrust upon Thy Holy Church so unexpectedly,
So may he just as swiftly be taken away from us.
Through Our Lord, etc.

Behold the evolution of papolatry and ecclesial insanity: first to criticize the pope was disloyalty; then it became schism; now it is paganism. The true pagans are those who worship a man, even when he is the pope. Edward

"in order not to fall into religious rigor." Does this mean that the true way to follow Christ now is by lukewarmness. We Traditionalists have been saying for a long time that God has been thrown out of His Church. Maybe now those who have been calling us reactionaries for a long time will open their eyes to the facts.

Think Jesus, the woman caught in adultery, the men with rocks and the outcome.... that's what it's all about.

No Vincent---think the woman caught in the irregular situation which does not deprive her of sanctifying grace even if she continues in it.

Regarding to the communion for adulaters, the president (patriarch) and the vice-president (bishop of Leiria-Fátima) of the Portuguese Bishops, apparently, read two apostolic exhortations completely different, the first read “no” and the second read “yes”. It’s amazing, it pleases everyone.

In Philippines, the iniquity has already started.