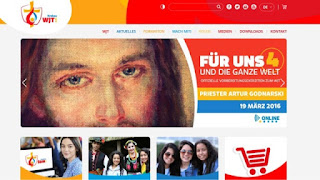 (Rome) Pope  Francis will participate in World Youth Day XXXI in July. This is according to the press office of the Holy See on Saturday.
It will be the second World Youth Day of the Pontificate of Pope Francis. The last WYD took place in 2013 the Brazilian city of Rio de Janeiro. This was a few months after the conclave which had chosen Pope Francis.
As the daily bulletin of the Vatican says,  the Pope will travel to Kraków "with the invitation of the most prominent Polish political representatives and Bishops" from the 27th to 31st of July.

The polish episcopate has distanced itself from the reigning head of the Church. There was steadfast opposition to it during both of the Family Synods in 2014 and 2016.  The eventuality  supported by Pope Francis, Tof admitting ecclesially but civilly married and divorced members to the Sacraments was rejected by the Polish episcopate.
On the 19th of March Pope Francis will sign the post-synodal document on the Family.  At the time of World Youth Day, his standpoint about the indissolubility of marriage and on homosexuality will be known, just like the reaction of the Polish Church.
Poland is the homeland of Pope John Paul II   (1978-2005). World Youth Day is an initiative which he originated.  The first WYD took place in Rome in 1984, as the Polish Pope introduced the "International Year of Youth."
Within the closest circle of the Pope's colleagues, and among the most significant papal electors of 2013, the pontificate of John Paul II is viewed as  "restorative turn", to which it maintains an inner distance.


The visit to Popand is not without tensions. Pope Francis has used pastoral visits to countries which have been critical of his line in order to herd those bishops to his Church course.
The locations of the  XXXIst World Youth Day will be Kraków, which is the most historical city of Poland. Kraków is in little Poland, and was till 1764, the coronation city of Polish kings and from 1596, capital of the homeland.
The Archbishop of Kraków has been  Stanislaw Kardinal Dziwisz since 2006, the longtime secretary of Pope John Paul II, whose successor,  Nachfolger, Benedikt XVI., named him shortly after his election as Archbishop of Kraków and raised him in 2006 to the cardinal's  rank. In the coming month  Cardinal Dziwisz will reach his 77th year. His emeritus status is soon to come. The Pope may, according to canon law, accept the resignation with all likelihood after World Youth Day.
The organization of WYD is in the hands of the Pontifical Council for the Laity. The concrete execution will proceed through a local organization committee. Information on WYD 2016 can be found on the international Internet site  krakow2016.com.

Pope and Youth in Auschwitz?

On the 4th of March, the Internet site published: Over 225 thousand pilgrims are planning to visit Auschwitz during WYD."  Entrance to the former Nationa Socialist concentration camp, "will only be available to participants in WYD who have booked in advance."  The site recalls the prison camp for Poles from 1940 and the "extermination location for Jews" from 1942. Above all, the martyrdom of two saints, Father Maximilian Maria Kolbe and  Sister Teresia Benedicta a Cruce (popularly Edith Stein), one of the Catholic faithful who converted from Judaism is recalled.

Two popes have visited the memorial of the former KZ of  KZ’s Auschwitz. The WYD site mentions  „at least  1,1Million  people, mostly Jews, but also Poles, Roma, Soviet Prisoners and people of other nationalities,"  who "the Germans destroyed in Auschwitz."
At the Auschwitz visit of John Paul II in 1979, he prayed at the memorial plaque from 1969, which describes "4 million" victims. When Pope Benedict visited in 2006, the plaque from the year 1995 counted the victims with the number 1.5 million.
After the end of Communist rule, the first free Polish government had corrected the widely exaggerated numbers. In the meantime, the government has corrected the numbers again.  The German Pope avoided any unpleasant mention of the number of victims mistakenly quantified after after the visit of his predecessor.
As Vatican Speaker Father Federico Lombardi said in January, it is "very likely", that Pope Francis will visit the memorial of Auschwitz in the context of World Youth Day.  In September 2014, the Pope gifted the  organization  Auschwitz-Birkenau 100,000 Euro. It is the custodian of the memorials and museums ( on the number of victims  and the Pope's Foundation  see Papst Franziskus stift Auschwitz-Gedenkstätte 100.000 Euro).
Text: Andreas Becker
Bild: krakow2016
Trans: Tancred vekron99@hotmail.com
AMDG