Pope Francis to Visit Fatima in May of 2017 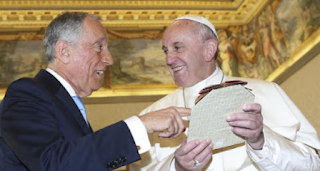 (Rome) Portugal President Marcelo Rebelo de Sousa was received by Pope Francis on his first foreign trip, which took him to Spain and Italy.   Rebelo de Sousa won the direct elections for the Portuguese Head of State last January 24.  He was inaugurated on March 9.

Prime Minister Rebelo is a founding member of  the Social Democratic Party of Portugal (PSD), created in 1974, which is - is a Christian Democratic party - despite the name.


The encounter with the Catholic Church leader lasted half an hour. Following this, President Rebelo told the press that he had invited Pope Francis for the 100th anniversary of the apparitions of Fatima in Portugal.

At the same time Rebelo confirmed that  Cardinal Secretary Parolin will be present on the 100th anniversary of the last apparition on the 12th/13th of October 1917. Pope Francis will not travel with him in October to Fatima


On May 13th, in the month named by President Rebelo, the first apparition took place in 1917.
An official confirmation by the Vatican is not yet forthcoming, but it is certain that Pope Francis will visit next year Portugal and Fatima.  In April and September 2015, Francis had expressed a wish to visit the Portuguese Marian shrine.

Francis has already announced his participation on October 31st, 2016, his preference for the Catholic-Lutheran commemoration of  500 years of Protestant "Reformation" in Stockholm. It's a decision that has caused some grumbling in certain Catholic circles.

In this context, it is noted from the Catholic side that Protestants may indeed celebrate in 2017, although the 500 years of "Reformation" for Catholics is another commemoration, namely the 100 years Fatima is of real significance.


The Pope's visit to Portugal and Fatima in May 2017 would be intended, say observers, as "compensation" for the participation of Francis at Luther commemoration that gives the impression of a Catholic recognition of Luther.  Martin Luther is synonymous with the most serious cleavage of Latin Christendom.  "It is no cause to celebrate," said the Catholic News page Secretum meum mihi.
On the question, what is important for Catholics in 2017, 500 years of Reformation  or 100 years of Fatima,  the Catholic news website: "We are pleased with the Blessed Virgin Mary, the Mother of all Christians, the true ecumenist, for she is truly Catholic."

I was at a Traditional Rite of Mass. In the sermon, the priest spoke sympathetically about Martin Luther. When the time came for the Consecration, the priest elevated the Chalice first and then the Host. I asked him about it afterward and he wasn't aware he had done it. If Pope Francis celebrates Luther's 500th, I think there will be an immediate negative result of some kind that everyone will witness.

That is a very bad sign for such priest... If he elevated the Chalice first, what kind the words of Consecration did he spoke? About the Body Of Christ? That is NOT GOOD SIGN... Very surprising for the Traditional Mass

traditional "rite" of mass? What is that exactly? I suggest you skip that priests traditional rite of mass and go to a Traditional Latin Mass using the 1862 (or earlier if you can find it) rite.

This is a great post! And I love your pictures! I visited Fatima last year and dedicated a short post: http://www.paulinaontheroad.com/2015/09/01/f%C3%A1tima-between-deep-faith-and-knick-knack/ I hope you enjoy the read! 

THAT ought to be good! Can't hardly wait!

So...will he make the consecration she requested? NO. It'll just be another punch in the face to the Blessed Mother as he goes on to celebrate the rending of her Son's Mystical Body, paying homage to the chief heresiarch who rent it. Bowels of hell stuff this.

That priest is now suffering from Alzheimer's and is totally out of it. I finally made it home to the SSPX. Thank you for your concern on my behalf!

Guess that he isn't planning on crawling into Pope John's tomb any time soon.

A little on the precious side, eh?

I'm sure that Francis will manage to make the trip all about Francis.

I say that because there are some weird novus ordo masses that they say all or mostly in Latin, I believe they have had one up in the Detroit diocese for years. One could be visiting a town and go to this "latin mass" and get some kind of tomfoolery. When I travel it's a great joy too look up the TLM if I can find one.

Typo..too. Tancred can you get us an edit button?
John

The consecration has to be made by the Pope so no, Francis can't do it.

Well, I live in Portugal and the news about that aren’t that conclusive, at least from my point of view.

The Fatima Shrine is expecting the visit of Pope Francis, for the commemorations of the centenary of the apparitions, since he expressed his positive opinion about that possibility. However, he hasn’t confirmed it yet, apparently. The Cardinal Patriarch of Lisbon, Manuel Clemente said he was looking forward to get some more details about that, from the President’s meeting with the Pope, because, as he said, he doesn’t know anything else more that intention.

After the meeting with the Pope, what we can realize from the President’s comments is that, despite his good impression from the Pope’s reaction to the official invitation to come to Portugal, he didn’t confirm that he will come yet, saying that the has many official invitations to deal with… So, he can conclude that the Pope, as far as we know, didn’t say that he is definitely coming to Portugal.

It’s true that Marcelo Rebelo de Sousa is known as a catholic, but the PSD is completely a secular party, despite being more positioned on the right wing side than the other major party in Portugal, ideologically both of the center.

"The moment has come in which God asks the Holy Father to order and make IN UNION WITH ALL THE BISHOPS OF THE WORLD the Consecration of RUSSIA to My Immaculate Heart, promising to save it by this means.." (emphasis added)

"Make it known to the Holy Father that I am still awaiting the Consecration of Russia. Without the Consecration, Russia will not be able to convert, nor will the world have peace."

1960 - Pope John XXIII refuses to reveal the Third Secret of Fatima (I.e. the exact words of Our Lady which follow Her words on July 13, 1917: "In Portugal, the dogma of the Faith will always be preserved...")

1960s - Pope Paul VI declares Our Lady the Mother of the Church and consecrates the WORLD to Our Lady.

1982 & 1984 - Pope John Paul II consecrates the WORLD to Our Lady. Immediately after the consecration on March 25, 1984, he departs from his prepared text and adds these words: " Enlighten especially the peoples You are AWAITING our consecration and confiding. "

2000 - Pope John Paul II "entrusts' the WORLD to the intercession of Our Lady.

2013 - Pope Francis entrusts' his pontificate to Our Lady of Fatima.

God will give us peace on His terms, not ours. The first step is the public revelation of the Third Secret of Fatima as noted above. Until that happens, things will go from bad to worse.

Hi everybody I am Nasir Christian catholic from pakistan working for Orphans nd old Widows,its my Email Christian_faith007@yahoo.com plz contact me For Future good Relationship