No "Video of the Pope" Since February 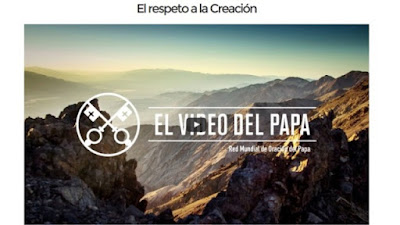 (Rome) Today it is already March 10th, yet, "The Video of the Pope" for the month of March has still not been published.
Since the year's beginning, a prayer apostolate has been  entrusted to the Jesuit Order to publish the prayer reflections of the pope, not only in writing, but in the form of a video.  This video, "The Video of the Pope," is to be published on social networks world wide in various languages. The pope is offering a personal message to humanity. Spainish is the original language of the Church's leader.
Up to now two videos have been published for the month of January and February,  but on the sixth day of the month.

Both videos are controversial,   the first video was especially outrageous which caused the most shocked reactions. The January video was charged with having  syncretistic Tendencies.  The theologian  Klaus Obenauer wrote  in  an Analysis : the Pope must decide either for Nathan the Wise or Jesus Christ. The video shows Christendom, Judaism, Islam and Buddhism as equal religions. The message insisted that it doesn't matter what one believes, the main point is that one believes something and learns to communicate with others.  The Jesus child was next to a Menorah, Islamic prayer beads and a  Buddha statue in the picture as one truth among many.
In the first video, the representative of Christendom was Pope Francis' former press secretary  when he was Archbishop of  Buenos Aires. He's a man that Francis esteems, but posses strange Ideas.
The February-Video contains Eco-social instructions.   It opposed the "slavery of consumerism" and a throw away culture and promotesocial engagement and protection of the environment.

Video Prodiction under the Oversoght of Vatican Television   CTV

Both videos were disseminated by  the prayer apostolate entrusted to the Jesuits. They were produced by the media and advertising agency  La Machi of Barcelona inset the oversight of Vatican Television Center  CTV.
The first third of the month has already passed, but the third video with the prayer reflections of the pope for March has still not been published.  The lateness has not been explained by the Vatican.
"What's going on?" Asks the Catholic news agency   Secretum meum mihi.
Text: Giuseppe Nardi
Bild: El Video del Papa (Screeenshot)
Trans: Tancred vekron99@hotmail.com
AMDG

I think this is it
https://www.youtube.com/watch?v=510kBYj57cc

It is a shame that translations with so many misspellings and incoherent sentences are published without editing. It does detract from the credibility of the articles themselves and the blog. Erasmus

I will say this one is a vast improvement over the others. He might have done well to mention the contraceptive mentality and homosexual agenda that threaten families regardless of economic levels. At least it wasn't chock full of progressivism or heresy.

You can start working immediately if you pay me $3.43 a word.

Snide and arrogant come-backs do not cover a fact that Aristotle, among others, noted long ago: credibility suffers when there is a perceived lack of competence: it's basic rhetoric. And it was meant, by the way, with the intention of having our ideas put forth more convincingly rather than to offend anyone.

Like I said. You're welcome to take the job.

Besides having a job I have loved for over thirty years and which rewards me very well, I would not work for someone like you even if I were starving and begging on street corners. Thank you for the kind, Christian offer, though. Erasmus

Not only do you offer unsolicited advice, but you offer no help either, and you're surprised when people assume you're ill-willed.

Talk about "graceless"! You, Tancred, are the king of that. Even unsolicited advice is gracious when it is well-founded---as mine was originally offered. You slander me by saying I am ill-willed when I merely pointed out what is there for all to see: that the narrative in question is full of incoherent sentences and misspellings, which make it hard to read and raises doubts about accuracy of content. Only a touchy, paranoid jerk like you would take offense at that. You should be graciously grateful instead of insulting and truly filled with ill will---the usual, you accuse others of the ugliness you see in yourself. You must be some kind of cleric or ex-cleric; such is their usual arrogance and ignorance. Erasmus