New Ostpolitik: The "Russicum" in Rome is to be Closed 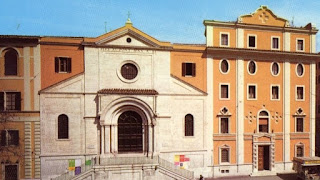 (Rome) "Russicum Addio," writes Vatican expert Sandro Magister. "For the glorious Pontifical College founded in 1929 by Pope Pius XI. to train Russian seminarians, but even more to keep alive   the Catholic faith in the Soviet Union, the closure is a done deal."


The Pontifical College of the Russicum is in close proximity to the Patriarchal Basilica of Santa Maria Maggiore. The church is dedicated to the Father of Monasticism, St. Anthony.
The founder of the institution, which, after the bloody persecution of Christians by the Bolsheviks was entrusted to the Society of Jesus from the beginning on,  whom Pope Pius XI. entrusted this haven for Russian Catholics but also Orthodox Russians who converted under the influence of apocalyptic events in the former Russian Empire after the October Revolution, to the Catholic faith.

Refuge during the Soviet era

Missionaries were trained in the Russicum, who had the courage to go for their faith into the Soviet Union in order to evangelize. "There was a certain enthusiasm to go to Russia to preach the Gospel, and if necessary to die for it," said the Austrian-Swiss Jesuit born i 1915, Father Ludwig Pichler, about his memories on Russicum.
Among the students of Russicum belonged Blessed Theodore Romscha (1911-1947), Eparch of the Ruthenian Greek Catholic Church of Mukachevo, martyred.  Likewise, Father Pietro Leoni (1909-1995), Father Paul Chaleil (1913-1983), Father Walter Ciszek (1904-1984), Father Viktor Novikov (1905-1979), all of whom belonged to the Jesuits, all were doing missionary work in the Soviet Union and all were interned in the gulag.


Among the forgotten figures of this Pontifical College was Julia Nikolaevna Dansa, who from 1939 until her death in 1942 taught in the Russicum. The descendant of an ancient Byzantine aristocratic family, among whose ancestors was Emperor Romanos III. Agyros (968-1034), who had been occupied in her youth with occult practices, studied history and philosophy in Paris, was maid of honor of the Russian Empress and fought after the October Revolution in a Cossack regiment against the Bolsheviks. In 1920 she later met the beatified Leonid Fyodorov and converted to Catholicism. She joined the newly founded Catholic Nuns in St. Petersburg. In 1923 she was arrested in the wake of the communist persecution of Catholics and was interned on the Solovetsky Islands. In 1932 she was released and allowed to leave the country for Berlin in 1934 under the condition that she sign a declaration of silence about Soviet concentration camps. In France, she entered a convent of the Dominicans   and wrote in her last years several writings in which she contrasted Marxism with Christianity, and criticized Marxism. The writings, including her book, Catholic Knowledge of God and Marxist Atheism, which drew little attention not only in the field of philosophy, but also within Church circles under the changed conditions of the post-war period.

The Pontifical Oriental Institute Takes Over the Building

The building in which the Russicum is housed is adjacent to the Pontifical Oriental Institute, also run by the Jesuit Order. The Oriental Institute, which is celebrating the 100th year of its existence in the coming year, will be expanded. The number of faculty is increased and at the same time the rank of the institution into a university.
In this case, which enjoyed Orient Institute of the Pope last none too good health.A year ago it was about turbulence came at the Institut tip.


The new Rector at the Oriental Institute is Father David Nazar, a Canadian Jesuit of Ukrainian descent. From 2005-2015 he was religious superior in Ukraine. He is determined to lead the Institute to the headlines and bring new glory. The Oriental Institute was nevertheless already a showcase of "historical encounters" and welcomed "illustrious guests".
Father Nazar expects that he will  soon get the green light for the takeover of the Russicums  from  the Congregation for Eastern Churches, whose prefect, the Argentine Cardinal Leonardo Sandri, is also Grand Chancellor of the Orient Institute as well as the Pontifical Council for Promoting Christian Unity and from Pope Francis, but "not least from the benevolence of the Moscow Patriarchate and the Kremlin," said Magister. The Russian Orthodox Metropolitan Nikodim of Leningrad and Novgorod was "at home" in the Brezhnev era with the Jesuits in Rome. In his Rome stays he slept either in Russicum or "with honor" in the Villa Cavalletti Frascati as a guest of the then Jesuit Father General, Pedro Arrupe.
Nikodim turn summoned the Jesuit Miguel Arranz as a professor at his Theological Academy in Leningrad, while a crowd of Russian students to study could be sent to the pontifical universities in Rome.

As intercommunion between Catholics and Russian Orthodox  prevailed

Father Arranz was in use as a translator with that audience on September 5, 1978 at the Vatican  when Nikodim was received by Pope John Paul I.. During the audience the Metropolitan suffered a heart attack and died before the Pope's eyes. "The Jesuit never wanted to reveal what the Metropolitan said to the Pope at this meeting, who himself was to die even three weeks later," says Magister.
With the death of Nikodim, winter again froze over  the relations between Rome and Moscow. "Under the Metropolitan, the dialogue between the Church of Rome and the Patriarchate of Moscow had reached a peak," said Magister. The Moscow Patriarchate even allowed inter-communion at that time even   between Orthodox and Catholics, a short time later  it was banned under the pressure of the Ecumenical Patriarch of Constantinople and rivals again.
The intercommunion had existed from 1439-1453, as the Council of Florence brought full unity between Western and Eastern Church which had been realized under the leadership of the Pope. The Turkish conquerors proceeded then, however, for political reasons to place anti-Western religious leaders at the head of the Patriarchate. Only more than 500 years later, were they reestablished again briefly under Nikodim.
"The Ecumenical Patriarchate of Constantinople does not allow intercommunion with Catholics, despite its super friendly dialog reputation until now," said Magister.
"It is curious that Father Antonio Spadaro," the editor of the Roman Jesuit journal Civilta Cattolica and the close Pope's confidant, "has not mentioned this happy, ecumenical spring" when went over the history in his journal on March 12,  celebrating the embrace between Francis and the Moscow Patriarch Cyril in Havana as an unprecedented new beginning.  It's an omission which corresponds entirely to the revisionist style of the Soviet Union, such as the upcoming extinction of glorious Russicums. "
The following video shows a report of the Italian newsreel of 15 April 1940, the Russicum .

I assume that under the New Church program there is no motivation to train missionaries for any land including Russia.

As I understand it, the North American College is preparing scores of missionaries for the evangelization of Africa and South Asia.

Proselitism is a nonsense, don't you know it?

For what reason is the Russicum closing ?

It's closing because it reporesents the traditional Catholic theology (before the filth of Vatican II), that the Catholic Church is the one True Church, and that however noble and beautiful it's traditions, the Russian Orthodox Church is in error as are all Orthodox branches. This at least was Catholic tradition. Now that Catholic tradition has been discarded along with the Mass, and the Church reduced to nothing since Vatican II, the old ideas that the Russicum represent hold no place in the Church, or in the mind of the Bergoglian papacy(however short it looks like it will be). Also, there's less than 10 seminarians there, which is probably the biggest reason.
Lastly, the Jesuits have declines so much since Vatican II (there's less that 400 of them left in Italy) they don't have the manpower to staff it! That's the only good thing!
Damian Malliapalli

While at Northeastern University in Boston I was pastored by Archimandrite Alexis Floridi, S.J. (Memory Eternal) of the Russicum. Being of Carpatho-Rusyn and Italian-Greek Heritage, the Russicum was a personal blessing to me. Wonderful memories of Our Lady of Kazan Russian Greek Catholic Church of South Boston. I only regret that I did not go inside when I was literally outside of it in Rome.☦️✝️