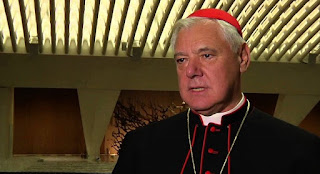 (Rome) "The doctrine of the Church does not change."   The debut of a new book has been announced with this sentence. While the world waits for the post-synodal letter of Pope Francis on the Double Family Synod, the interview book "Report on the Hope" by Cardinal Gerhard Müller, Prefect of the Congregation, is ready for publication. Mercy never means that the commandments of God would no longer be valid. Therefore, the rules can not be "overcome by life", in contrast to what the new Archbishop of Berlin, Heiner Koch, said just before the Synod of Bishops in October 2015 to the press.
The Spanish priest, Carlos Granados had a long conversation with Cardinal Muller that is appearing in book form. The Spanish title is "Informe sobre la esperanza."  Granados is Director General of the Library of Christian Authors .On March 19, the third anniversary of his inauguration,  Pope Francis signed the post-synodal letter about marriage and the family, to be published in April.
Founded in 1944 Biblioteca de Autores Cristianos (BAC) publishes the works of classical Catholic authors. The location of the collection is the Pontifical University of Salamanca. During the reign of General Franco, the library was declared a national interest and facilitates the publication of the works by government grants.
The first volume of the library was the Spanish Bible translation of Nacar and Colunga, published in 1944, considered the most common Bible translation in the Spanish-speaking world today.


Some excerpts were published in advance in the Spanish right to life magazine, Actuall.  A major concern is the question of the admission of divorcees who were ecclesiastically married, but civilly remarried. Cardinal Müller affirms in the book that there can be no Communion. It is "impossible" to grant those Communion who live outside their valid marriage in another relationship. "The nature of the divine right of the indissolubility of marriage" made ​​it impossible, says the Cardinal.
The Prefect has now also put in writing, which  the majority of these at the Family Synod insisted upon, that the Communion of these persons is not possible.

"Mercy is never a dispensation from the Commandments of God or a justification for them to be overriden or set aside: 'Go and sin no more,' says Jesus to the adulterous woman, after he had treated her with great compassion."

Upon this example of Jesus implored shepherds, priests and bishops  to align and "to make an effort to include the divorced and remarried with tact and warmth, to accompany them and to involve them in the normal life the Church."

The biggest scandal of the Church would be, "not to mention the difference between good and evil by name"

Whoever pleads contrary, that the position of the Church on sexual morality is not realistic, Cardinal Müller answers:

"The biggest scandal  that  the Church can cause is not that she has sinners, but ceasing in calling the difference between good and evil by name, and to relativize it; ceasing to explain what is sin or trying to justify  what is supposedly a greater closeness and mercy towards the sinner."

On the  sacrament of marriage the Prefect says a marriage "may fail by no longer living together, or in   human expectations, but not the action of God, which is why the Sacrament does not fail as such."
The marriage is  "not an ideal, not a reflection of my desires, like a child who would like to be an astronaut ... ideals are often not realizable". The marriage is, however, "a God-given reality: the sanctification of the spouses and of life."

Cardinal Müller also takes a position on gender theory and repeats an effective statement of Pope Francis, with which he effectively summed it up when he spoke of "ideological colonization":
"Can we build a society without respecting the difference between man and woman?" asks the Cardinal. God wanted man as Adam and Eve, said Cardinal Müller, in gender ideology, man raises himself to God and determines for himself what and what is evil good.
Text: Giuseppe Nardi
image. Youtube / Religionenlibertad (screenshots)
Trans: Tancred vekron99@hotmail.com
Link to Katholisches...
Order the book on amazon, here.
AMDG
Posted by Tancred at 8:51 AM

Meuller is having a bet on the only two runners in the race. Here, he's wagering on the Law and Order pony while at the last Synod he chanced his life savings on 'Internal Forum' along with Kasper, Schoenborn, Marx & Stable.

Card. Ratzinger interpreted Vatican Council II with an irrationality when a rational option was available .He then excommunicated Abp. Lefebvre and the SSPX bishops for not accepting this heretical version of the faith
http://eucharistandmission.blogspot.it/2016/03/card-ratzinger-interpreted-vatican.html

Ratzinger also removed Burke from St. Louis in 2008 to placate the pro abortion American Catholic politicians such as Nancy Pelosi and Claire McCaskill.

They weren't excommunicated on a doctrinal basis but for disobedience.

You sure type a lot.

As you wish, but his mama always called him Joey. Just as Mary called her son little Jesus.