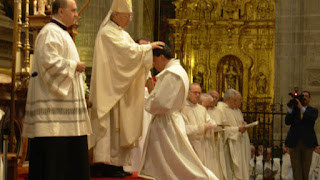 (Madrid) In 2015 there were 28 percent more new priests ordained in Spain than in the previous year.

HERE YOU CAN ADVERTISE »
In 2015 150 new priests were consecrated, while there were only 117 in 2014.These figures were announced the Spanish Episcopal Conference.
Currently, 1,300 seminarians are preparing for the priesthood. In the academic year 2015/2016 there were 270 new entrants to the diocesan seminaries.
In 2014 the number of new priests has fallen by ten percent from 2013, while the number of seminarians increased by 2.7 percent.
Among the Spanish dioceses, the archdiocese of Valencia, Madrid and Toledo stand out with numerous new priests.
"Why Madrid and Barcelona has not?", asks the well-known Spanish columnist Francisco Fernandez de la Cigoña.
"Why does the diocese Terrasa have more seminarians than Barcelona and all other Catalan dioceses together? Why does Ciudad Rodrigo have more seminarians than Salamanca, or Tuy-Vigo over Mondonedo-Ferrol? The reason is to be found not only among the bishops, if they are also to blame. There are not a few pastors who do not care about the promotion of priestly vocations.
Bishops as pastors should be aware: Without vocations and priestly ordinations without dying dioceses. One should take note in the Vatican of whether there are priestly vocations in a diocese or not. It is absurd to promote those that produce no vocations. The Church needs priests. Priestly vocations have to be a priority for a bishop."
Text: Giuseppe Nardi
Image: InfoVaticana
Trans: Tancred vekron99@hotmail.com
Link to Katholisches...
AMDG
Posted by Tancred at 6:01 PM

Are these priest's in the Mozarabic Rite?

150 new priests a year is abysmal, but just think of France, which had I think 90+ per year, and Ireland which had at best 25+.
Here in the USA, before Vatican II there used to be close to 1,000+ new priests a year. Now there are about 425. In my Archdiocese of Philadelphia, the 1930's, 40's and 50's saw ordination classes in some years as high as 60 new priests. Because we were blessed to have had until 1988 perhaps the last great American "Prince of the Church" Cardinal in the person of John Cardinal Krol, a staunch traditionalist and conservative who secretely probably did not like the reforms of Vatican II, the Archdiocese fared very well with numbers of priestly ordinations compared to the rest of Vatican II USA Catholicism until Cardinal Krol retired in 1988(died 1996). After him, the number of ordniations collapsed to what we have today....4-5 new priests a year. The huge seminary which was the pride of our Archdiocese for 100+ years is about 75% empty, and the larger of the two seminary buildings, built in 1928 under the great Cardinal Denis Dougherty will probably be sold for re-development. Before Vatican II we had close to 600 seminarians studying for Philadelphia, with an additional 30-40 being sent as a special treat to study at the Pontifical North American College in Rome, or at Louvaine Catholic University in Belgium....when that place was still CAtholic. Today, there are fewer seminarians studying for Philadelphia (about 48), than before the Civil War in the USA(1861-65). Tragic.
When Cardinal Krol retired, we got Cardinal Bevilaqua, who was abysmal as a Cardinal Archbishop...and who hid reports of priest-sex abuse of minors. Seminary enrollment, which declined after Vatican II but was still at roughly 255 all the way thru the late 1970's till Krol retired, collapsed under Bevilaqua into the 180's. Under Cardinal Rigali, who was an improvement to Bevilaqua, there was a brief renaissance where enrollment crept up to 225, but now under the Vatican II cheerleader Archbishop Charles Chaput, enrollment has plummeted to about 140. He has closed down much of the Archdiocese to pay for the expenses of lawsuits from priest/sex abuse cases (all involving gay priests who crept into seminaries in the Vatican II years and for 20 years after.
These dioceses in Spain are fortunate in their vocations. If they have traditional Archbishops, vocations grow...liberals or "moderates" who are actually also liberals, it declines.
Francis has been a disaster for priestly vocations....the bad effects of his reign now being felt, and will be for a few years after he's gone. Which so many millions hope is very soon!
Damian Malliapalli