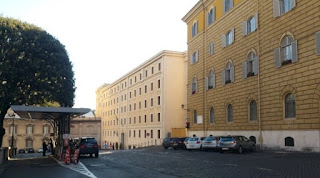 (Rome) The 34 year old Miriam Wuolou was found dead last Friday at her residence. The Eritrean Christian worked in the Vatican guesthouse Santa Marta, where Pope Francis lives with 40 of its employees.

HERE YOU CAN ADVERTISE »
Wuolou was busy at the front desk of the guest house.The week before her death, she remained away from work because of illness.
Currently, the exact cause of death of the woman is yet to be released. An autopsy was ordered. The Italian police have opened an investigation to determine the father the child for  Miriam Wuolou was seven months pregnant. Wuolou suffered from a severe form of diabetes.
The woman's body was found by the Carabinieri after the brother had notified them, because his sister had not reported.
Text: Giuseppe Nardi
Image: InfoVaticana
Trans: Tancred vekron99@hotmail.com

Link to Katholisches...
AMDG
Posted by Tancred at 8:03 AM