Pope Francis and the Remarried Divorced of Tuxla Gutierrez 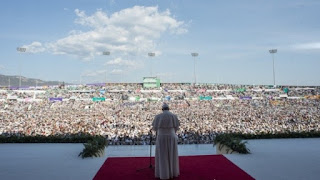 HERE YOU CAN ADVERTISE »
In the incident on Tuesday, Pope Francis was understandably incensed because teenagers were so strongly drawn to him that he almost  fell over a disabled boy in a wheelchair. The incident took place at the meeting with more than 100,000 young people in Morelia.

More significant, but largely unnoticed, was another incident on Monday of Pope Francis'  meeting   with  families in Tuxla Gutierrez. Pope Francis defended the traditional family in his speech. In Mexico, there is a bitter political slugfest to legalize "gay marriage" and the introduce an adoption law for homosexuals:

"Nowadays we see and  experience on several fronts, as  where the family is weakened, as it is called into question, as one thinks that it is an already obsolete model and has no place in our societies, and how under the pretext of modernity, increasingly, a home based on the isolation model is favored. In our societies - which describe themselves as free, democratic, sovereign societies - penetrated with an ideological colonization, which  destroys society, and in the end we are all colonies of ideologies, which destroys the family,  the family at its core, the foundation of any healthy society ."

Previously, the Pope had listened under the hot sun of Chiapas to the testimony of four families who have been "injured" in different ways, as it is  described in the newer Church language. In some couples (picture) there were remarried divorcees. Humberto and Claudia had married again after a divorce registry office, which because of the validity of a first marriage, Claudia is excluded from an ecclesiastical marriage.

Testimony of a couple remarried divorcees

The couple personifies the "irregular" union which not a few bishops, priests and theologians would like to grant admission to the sacraments, because their number is increasing more and more. Two Synods argued on this point. Cardinal Walter Kasper's has, since 2013, been the spokesman of the "Possibilists" who advocate admission to Communion. But both times the Kasperians could not impose this.
Since the conclusion of the second Synod of Bishops end of October 2015, the Church awaits a decision by Pope Francis and his Post-synodal letter, to be published in February.
The encounter with the couple in Tuxla Gutierrez did not lack explosiveness. How did Pope Francis react?
But the couple did not ask for the admission to Communion. "We can not approach the Eucharist," Humberto said, "but we can participate through our needy, sick,  brother, deprived of his liberty, at  Communion."

The reaction of Pope Francis

Pope Francis said in his reaction first: "Humberto and Claudia try to pass on to us the love of God through service and assistance to the neighbor." Then he spoke directly to the pair:

"You have taken courage and you pray, you are with Jesus, you are immersed in the life of the Church. You have used a beautiful expression: We keep comunio [community] with the weak, sick, needy and imprisoned brother '. Thank you thank you!"

In Osservatore Romano, the newspaper of the Vatican, the testimony was reproduced in summary.  Humberto Gomez was still single when he civilly married Claudia 16 years ago, who was already divorced and brought three children. Their son was born eleven years ago, who is now an altar boy, "as the Father adds, visibly proud". The couple had initially suffered from the exclusion from the sacraments, then they slowly came to a rapprochement through the group Divorciados vueltos a casar  which offers pastoral care in Mexican dioceses  for the divorced and remarried. Through this group, the pair began to volunteer to care for the sick, the imprisoned women and drug-addicted prisoners.

Provided evidence of integration without admission to communion

"If there is need   for evidence to support 'integration' and the 'full participation" of members as "living members" in the  Church, as the Relatio, the final report of the Family Synod, according to the teaching of the Church, of remarried divorcees proposed as living members  and without admission to Eucharistic Communion, then this pair has done this," said the Vatican expert Sandro Magister. "And Pope Francis, listened to them and nodded with conviction. It remains to be seen what he will write to the anticipated post-synodal document. "
Text: Giuseppe Nardi
Image: Vatican.va/OR (screenshots)
Trans: Tancred vekron99@hotmail.com
Link to katholisches...
AMDG
Posted by Tancred at 9:23 AM

Meanwhile, back at the ranch, Humberto and Claudia (like Herod and Herodias) are piling up years of mortal sin that they will either die and go to hell for (like if they are suddenly killed by an earthquake or car accident) or they will burn off in purgatory if by some grace they repent of their sin.

Here it is Lent and no call to repentance and turning away from sin -- just worship Satan w/one's sins.


That wasn't the only gay divorcee frannie was whoopin' it up w/ in Mexico: