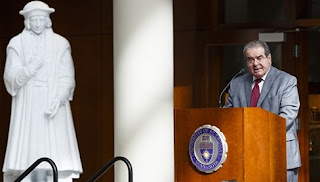 Unfortunately, it looks like he is not getting a Traditional Requiem Mass - so beautiful and powerful for the departed soul. Count me in for $50. If Clear Creek is no longer doing this, I think I know of two other options.

Ridiculous. I also learned this today that it will just be the ordinary, banal Novus Ordo. This is a pathetically missed opportunity on a number of levels.

I will ask a priest of the S.S.P X. to pray a Mass for Judge A. Scalia's immortal soul

My friend's Father passed away yesterday. could you give me information who else are doing it besides Clear Creek. I got mails from Clear Creek seems they support Vatican II.