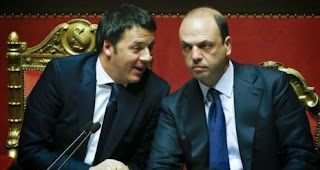 (Rome) Yesterday, Italy's Left Democratic Prime Minister, Matteo Renzi in Parliament's vote of confidence to abbreviate the legislative process for "gay marriage". As in other countries, the constitutionally prescribed route was bypassed to enforce special rights for homosexuals. The result is another victory of gender ideology and another parody of marriage.

A "compromise" was decided upon in its preparation by the involvement of part of the Catholic Church in Italy over which Pope Francis presided quietly. After a month of parliamentary debate and stubborn resistance from the population - on 30 January, two million people protested in Rome against the government's plans - Prime Minister Renzi became increasingly nervous that his government could fall over the gay issue, just as had the left-wing government of of 2008.

To so opportunely came to him the willingness of a part of the church, to avoid a conflict with the government on socio-political level. Italy Interior Minister Angelino Alfano, a representative of the Christian Democrat-right liberal party alliance, and smaller coalition partner of the Left Democrats, and Bishop Nunzio Galatino, Secretary General of the Italian Episcopal Conference, agreed in a back room "compromise": to introduce gay marriage without calling it "marriage", but no adoption rights for homosexuals. The bill, is named after its originator, Monica Cirinnà, has since then been described in Catholic circles as the "Alfano Galatino Bill".

The organizers of the Family Day on 30 January reject the "compromise." Catholic commentators describe the "compromise" as "treason" and its Catholic supporters as "traitors".

Cardinal Müller: "Politicians have to serve the community and not to impose a false ideology"

At decisive moments before the parliamentary vote was announced, Cardinal Gerhard Müller, Prefect of the Congregation for Doctrine and the Faith, reaffirmed that a marriage between two people of the same sex "is not possible" and that this is a contradiction in itself. Cardinal Müller demanded that politicians in their votes and decision process "respect human nature". The cardinal himself said, referring to a statement of the CDF from 2003: "Politicians have to serve the community and not to impose a false ideology."

The Cardinal took advantage of a conference currently being held at the Vatican Conference on the Encyclical Deus Caritas est by Benedict XVI. that for its opinion is relevant not only the Italian Parliament, but of particular relevance.

Approval of "gay marriage" in the sense of the Church's blessing

However, with the Galatino's consent in his pocket, the Left Democrats and Christian Democrats could agree with legalizing "gay marriage" in the sense of the Church's blessing. As the government coupled its vote, it finally reached last night shortly after 7pm a majority of 173 of the 321 senators, securing a vote of confidence. The vote was attended by only 244 senators. Some moved for various reasons for absence, including the left-wing populist Five Star Movement, which left the hall before the vote. Of the Senators for Life, Ex-Prime Minister Mario Monti and former President Giorgio Napolitano for the law. Napolitano was praised by Pope Francis recently as one of the "Greats" of Italy.

Now the House of Representatives must approve the bill. Where the government has a clear majority.

Two steps forward - one step back.

Our Lord continues to be scourged by His own. Good cannot be reconciled with evil or light with dark. These men follow along with the works of satan at great peril to their souls.

A tragically sad day for the once great bastion of Catholicism - Italy. Rather like the fall of Ireland
and most recently of Portugal. There are still some standing for the unchanged Word of God. And at Judgement Day all will be revealed. Not for nothing was that great day also called the Day of Wrath. It is indeed a fearful thing to fall into the hands of the Living God!

Everything is possible with this BoR and his court, the once Catholic countries of South Europe are now atheist, maybe heathen, no more Catholic, that's for sure.

Absolutely you are right . Jesus is being crucified by His own. Do they believe that each one has a soul ; there is Judgement, there are Heaven and Hell. They play the role of Judas . Will they repent like Peter or Perish like Judas.

We should fast after midnight before Holy Communion,go to confession before every holy sacrifice of the mass,receive holy communion worthily,and pray for the former Roman Catholic nations.

On another note, hurrah, today the countdown has finally reached 0. Cardinal Mahony's retirement in here!!!