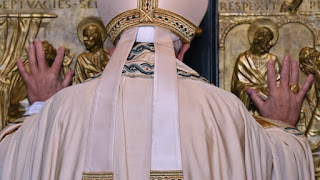 (Rome) A remarried divorcee went to confession before Christmas, but the confessor refused him absolution. The incident occurred in the southern Italian city of Bari in the cathedral which is dedicated to St. Nicholas of Myra. The daily La Gazzetta del Mezzogiorno printed a letter on 30 December   from the man who described his "disappointment" and demanded the "mercy from Pope Francis" that had been denied him in the "Holy Year of Mercy". Because as the divorced and remarried insisted, "absolution is given to all who confess." A misunderstanding?

HERE YOU CAN ADVERTISE »
Such a requirement, which presupposes an automatism, was an "absurd claim" says the well-known theologian and liturgist, Msgr. Nicola Bux. "The priest is not a notary." On January 3, the same newspaper published an interview with Msgr. Bux,  who is a priest of the Archdiocese of Bari. The Consultor of Roman dicasteries is the author of numerous internationally acclaimed books. His most recent monograph is entitled: "How to go to the Holy Mass, without losing faith," which has been translated into five languages.
Nicola Bux: "The priest is at the same time judge and psychiatrist.  To "absolve", to "free" and means in concrete terms,  to break the penitent  from his binding to sin. The priest, and not the believer, is to evaluate whether the conditions are met to grant the absolution or not.
Repentance is not enough?
Nicola Bux: The true repentance requires a commitment of the believer to release the connection. In the Gospel Jesus Christ says: go and sin no more. He does not say: Go and continue what suits you.
The priest saw the conditions of which you speak were not met?
Nicola Bux: Obviously. No absolution can be expected when there is no firm intention not to sin again.
And  the Holy Year of Mercy is called into question.
Nicola Bux: These rules recently led to quite a misunderstanding. The rules have not changed, and the priests have to stick to the traditional teaching, all, as well as all judges must abide by the law in the same way without exception. Why do we expect that this concept of course applies to the court, but to be knocked down in the Church?
It is clear is which side Don Bux is on.
Nicola Bux: I am of course on the side of Jesus Christ. No one on this earth has the authority to change the rules of his Church. Therefore, the Synod has produced a final document that absolutely nothing changes in terms of the Eucharist and the divorced and remarried.
But many think that Pope Francis intends to change course.
Nicola Bux: Another big misunderstanding. Cardinal Müller, the prefect of the CDF, and thus the guardian of the Catholic faith has said it very clearly: "The doctrine of the Church is not a man-made theory. The Magisterium of the Pope and the bishops is not above the Word of God."
According to the letter from our reader, the priest considers him   an even bigger sinner because he went to Communion, although he is divorced and remarried.
Nicola Bux: And for that we should place the guilt to the priest? It is Jesus Christ who proclaimed the indissolubility of marriage in the Gospel. And St. Paul warns against  receiving the sacrament unworthily. How can one demand access to the Eucharist if he  has left the community and bond with  and formed a bond with another woman? That is a contradiction in terms. And even more contradictions become visible in the letter.
What do you mean by that?
Nicola Bux: Above all, the starting point. The reader referred to himself on the one hand as a "devout Catholic," but at the same time as a divorced and remarried, who betrays the indissolubility of the marriage bond.  Then he speaks literally of a "whim" that had driven him after 12 years, once again in the confessional.  Catholics are obliged to report to confession at least once a year. So we have to do it with a typical example of a "homegrown Christianity."   If I define what is Catholic, and if so, Church and faith would suit my needs. A phenomenon against which Benedict XVI. had warned emphatically.
One last question: Is not the Holy Door of the Cathedral  a separate, special penitential?
Nicola Bux: This also needs clarity: Sin pulls like a crime, here  a better understanding helps to make a comparison with the criminal law, guilt and punishment. Confession brings the repentant sinner absolution from guilt, but not of the punishment that is to be served in the afterlife on a supernatural level. That is the moment when the Holy Year comes into play, which makes it possible as a special way  to wipe out the penalties, comparable to a complete or partial remission. The gates of mercy in the Church are and will always be open. But on the usual terms. And the priests know that they do not give in and not allow themselves to be intimidated by the prevailing opinions.
Introduction / translation: Giuseppe Nardi
Image: Mil / Arcidiocesi di Bari (screenshots)
Trans: Tancred vekron99@hotmail.com
LInk to Katholisches...
AMDG

Ah! And the priest (if there ever was one) is bound by the seal of Confession and may not reveal anything of his reasons for refusing absolution.