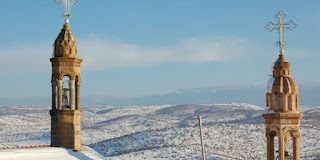 (Damascus/Ankara) On the night of January 17th, the Turkish air force bombed the Sharanish in Kurdish controlled northern Iraq. The Christians have been on the run since then. They had to flee in the middle of the night  in freezing temperatures 25 kilometers to the city of Zaxo because of the Turkish bombing.
The news was announced by the Chaldean Patriarchate, which sharply condemned the Turkish military attack. The destructive attack on the Christian village was "unjustifiable".


Turkey is   officially fighting the Islamic State (IS) in Iraq and Syria,   but in reality   especially against the Kurdish Workers' Party PKK.  Critics accuse Turkey of taking the fight against the jihadists as a  "pretext" to perform an illegal campaign against the Kurdish people in the neighboring countries.
The Chaldean Patriarchate is now demanding  autonomous Kurdish government of northern Iraq to take "reasonable measures to protect the citizens."  Louis Raphael I Sako, the Patriarch of Babylon and head of the Chaldean Church united with Rome, comes from Zaxo.

The difficult fate of Christians in the Middle East

As the papal news service Fides reported that the Christian village had been destroyed in the 1980s by the Iraqi army. Then, too, in the course of an anti-Kurdish military operation. The Christians returned and built the place up again. The reason for the return was the increasing persecution of Christians in Baghdad and Mosul.
Since 2014, several dozen Christian families living on the Nineveh plains fled there  before the conquest of the Islamic State had fled (IS). But even in Saharanish they are not sure.
Last fall the Christian villages in the area became an ​​involuntary battleground between the Kurdish army and other Kurdish organizations. Now it is the Turkish army which has expelled  the Christians  from Saharanish.
Text: Giuseppe Nardi
Image: Wikicommons / towers of the Mor Gabriel monastery in south Turkey, 130 northwest of Zaxo
Trans; Tancred vekron99@hotmail.com
Link to Katholisches...
AMDG

Please remember to pray for persecuted catholics daily during your rosary,please!!