"Gay Marriage": Bishops Uncertain About Pope's Course -- Which Led to Defeat in Argentina in 2010 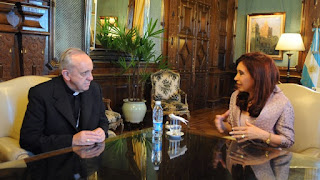 (Rome) The Family Day, which is the planned demonstration for the 30th of January, organized by the Italian Manif pour tous, and the Pope's attitude about it, has set off a battle royal in the Italian Bishops' Conference -- between its President Cardinal Angelo Bagnasco and the General Secretary Bishop Nunzio Galantino.  Additionally it's still being discussed in Argentina to this day whether Jorge Mario Bergoglio, had favored the introduction of "gay marriage"  when he was Archbishop of Buenos Aires and Primate of Argentina in 2010.

HERE YOU CAN ADVERTISE »
The president  of the Italian Episcopal Conference is automatically the pope as Bishop of Rome. However, he appointed as representative  both a delegated President [He was voted in by a majority vote, which was then considered a snub to the pope.] as well as the Secretary-General. Cardinal Bagnasco was acquired by Pope Francis from his predecessor. Bishop Galatino, however, was introduced by him and is considered a "man of the pope". On the first Family Day, on June 20, 2015   a million people took part to protest against the introduction of "gay marriage" and against the gender ideology in schools.  Now the debate begins in Parliament, which is the reason for a second Family Day, to tell the representatives of the people what the Catholics and other people of good will do not want.

Galatino let the bishops, organizers and the public know that there would be no support for the Family Day by the Episcopal Conference. He also revealed with regards to the controversial draft laws, that they are acceptable to him, except for the adoption rights for homosexuals and equality of gay partnerships with marriage.
Cardinal Bagnasco, however has assigned Avvenire, the daily newspaper of the Episcopal Conference,  to devote  attention and gain visibility for Family Day. The editorial promptly obeyed the episode after previously stony silence had reigned for days.
The process is tricky, because the official editor of the daily is General Secretary Galatino. The media of the Episcopal Conference is nominally under the General Secretariat.
Cardinal Bagnasco also telephoned on 16 January with Kiko Argüello, founder and president of the Neocatechumenal Way to encourage him to participate and mobilize. On June 20, thousands of families of the Neocatechumenal Way came to the Piazza San Giovanni.
Argüello responded immediately. He had the content of his telephone conversation with Cardinal Bagnasco published on the news service Zenit of the Legionaries of Christ, and was simultaneously announced his support for the Family Day.
"It is very important that the Italian bishops are with us, because otherwise were we going there alone, we'd be exposed to being accused that were 'homophobic'  and things like that. Behind us stands the Church who supported us in this defense of the Christian family, which is being hurt in this way."
Last Sunday, Cardinal Bagnasco spoke publicly against the bill, and in principle, and not just selectively, as Secretary Galatino has. The bill was "on the part of the Parliament, a great distraction from the real problems of Italy". He also announced his support for the Family Day. The rally he described as "comprehensible", "reasonable" and "absolutely necessary".
On January 25, a day before parliament starts debate on the introduction of "gay marriage" and five days before the Family Day, the winter session of the Permanent Council of the Bishops' Conference begins. "Sparks  should fly," said Vatican expert Sandro Magister.
Secretary Galatino has never allowed, since taking office in late 2013,  an opportunity to escape to let people know that he was acting on direct orders from Pope Francis. It  is not hard to believe him in this particular case, says Magister.  Pope Francis' dislike of  public confrontation is well known. Above all, he does not like confrontation with the political left, when it comes to issues such as right to life, abortion, euthanasia and homosexuality.

Argentina and the Introduction of "Gay Marriage"


In Argentina Bergoglio 2010 had the claim to impose his leadership as Primate in the fight against the legalization of "gay marriage". In reality, he maneuvered the Catholics in an impasse. He prevented an open resistance and thus sealed the defeat of the Church, even before the battle had begun. This is also known in the Vatican, the bishops' conference and by the organizers of the Family Day and brings considerable difficulties all together. They need a hand to avoid the mistakes of Argentina, in order not to end up as  it finished in France, but at the same time paying attention to the Pope, who wants to repeat the Argentine way, but can not be contradicted easily in the open. The conflict takes place behind the scenes, without too much coming to the public. And it takes place in the second and third row,  holding the course willed by Pope course wrong, without calling the Pope by name. Particularly problematic is proving that to Church representatives who give the organizers a hard time  "on behalf of the Pope."
In addition, there remains the hardly calculable factor, as to how Pope Francis will even behave. In Argentina 2010, he interfered actively to send the Catholics back home who wanted to resist the "gay marriage". He leaked, not to held to be idle,   that he had requested cloistered nuns, four monasteries, to have their prayers against the law. In correspondence he described the devil as the author of the law.
In Argentina some take him for evil, because  a diversionary tactic was seen to stifle Catholics. But it got worse. That is why it is discussed in Argentina today,  whether the "gay marriage"  had  been implemented in  2010 also thanks to the involvement of Cardinal Bergoglio.

What really happened in 2010 in Argentina?


"Credible Catholic sources from Buenos Aires have provided us  additional information in the last few days  on the matter," wrote the Vatican expert Sandro Magister.
"The letter of Bergoglio to the Carmelites, which was top secret until then, was suddenly made ​​public on 8 July 2010, but not by the official news service AICA of the Argentine Episcopal Conference, but on the website of the Archdiocese of Buenos Aires, apparently since the Archbishop so wanted it.
That was a bomb. The letter was adopted by all media and also AICA finally had it published. For days nothing else was talked about in Argentina  in and outside Parliament, where the supporters of the law had an easy time to make fun of Bergoglio's word choice about the devil and against them.
The most zealous supporters of the law, the Kirchnerista Miguel Pichetto, let his scorn have free reign, that 'such an intelligent man as the Cardinal' could 'express themselves that way. President Cristina Kirchner said she was shocked about, 'this return to the Middle Ages'."
Bergoglio had asked Catholics to keep still, because he would take care of the matter. Even so, not all were satisfied. Until July 8, 2010, several mass rallies against the bill were held in Argentina. People went in such large numbers on the street that President Kirchner could not be further  from certain of finding a majority in favor of the bill in parliament. The mood had turned against them.
Then Bergoglio,  with the publication of his letter to the four monasteries, really garnered ridicule for the Catholic rejection of "gay marriage." Kirchner triumphed.

With the release of Bergoglio's letter "everything changed"

"With the date of publication of the letter," said Magister, "everything changed.  The conflict was now polarized between the obscurantism of the Church and the enlightenment of progress." At least, its release represented for the proponents of the bill a coup and returned  them to the upper hand. On 15 July 2010,"gay marriage" was introduced with only three votes majority.
"In fact, there then reigned  an uneasiness among many Catholics who were committed to the defense of the family about Bergoglio's use of words in the letter, who had always expressed himself so cautiously and controlled in public.
And even today, as then, many wonder whether the publication of this letter did not have a counter-productive effect and thus favored the adoption of the law."
Magister adds this about his sources: "The Catholic,  Argentine sources have asked us not to reveal their identity," because, "since there is now  a new ecclesiastical establishment in Rome, then it can be dangerous", remember that "We here in Buenos Aires have lived with it for a long time."
Text: Giuseppe Nardi
Image: Wikicommons / Settimo Cielo / anw (Screenshot)
Trans: Tancred vekron99@hotmail.com
Link to Katholisches...
AMDG
Posted by Tancred at 8:28 AM

It was exactly like that. We marched alone that night in Buenos Aires. No Bishops, just a handful of priests. One of them told me they were forbidden to participate.
Then I realized who was Bergoglio.
Argie Faithfull

Honest question. Does anyone really believe Jorge Bergoglio has a problem with gay unions? I don't. He has been clear about gay marriage, but I don't think he has any problem with two men shacking up together. I really don't.

With each day that passes, it becomes clearer and clearer this man is not fit to sit on throne of St. Peter. He simply does not believe in the Catholic faith as it was practiced from the time of Christ until 1962. He seems to view the religion as his play toy.

Again, I repeat my oft read question. When will enough be enough? When will good Cardinals and Bishops (I assume there are a few) demand this nonsense stop? Their job is to protect the faith, not sit idly by as one man ruins it.

The only keys he holds are the keys to Santa Marta.

And there are people that still doubt Medjugorje and still wonder why Our Lady cries and asks a million times pray, pray, pray for the priests. Was I the only person (I go there all the time) that noticed that in 2013 she was nearly desperate repeating this? (You do not need to publish this, just an outflow after reading the stuff on women in the washing of feet). God helps us! Ratzinger, came back, come back please!

Not perverts notice since they love murdering, sodomizing and corrupting children (wonder when Rocco Palmo will start shouting about that).

Big mistake for Pope Benedict XVI to resign. Francis is a kook.

A church that does not unite behind a worthy prelate to denounce this traitor to the Faith that passes for Pope is not and cannot be the Church of Christ. Erasmus

This article provides an incredible level of insight. I think it is really marvelous. The church and governments around the world are collaborating in a special way.