The Easily Falsifiable Pope Francis: "War is the Leading Cause of Death"

Edit: so easily falsifiable but intimately linked to the usual statements of pacifists and freethinkers everywhere.

[veneremurcernui] Pope Francis made an absolutely ludicrous statement.  Wars are so far from being the leading cause of death virtually EVERYWHERE in the world his statement below beggars belief.  Is he really this ill-informed, or unhinged, or given to ridiculously flawed on the spot statements?

On his recent flight back from Africa, Pope Francis was asked a “gotcha” question from the press regarding condom use in avoiding the spread of HIV on that continent where it is so rife.  After undermining 2000 year old doctrine yet again, Pope Francis went on a rant that exposed his incredibly simplistic (I would really like to say, stupid) view of the causes of poverty and suffering in the world while once again harping against “arms manufacture” and wars.  But when he claims that wars are the number 1 cause of death (he said this generally, as if it is a universal truth around the world), he really demonstrated his grave inability to either proclaim the Faith or even think clearly, missing the obvious fact (which rarely, if ever, appears to occur to him) that ABORTION has been the leading cause of death around the world over the past 40 years, with probably close to two BILLION lives snuffed out in that time from this satanic sacrifice of perfectly innocent (of actual sin) children: 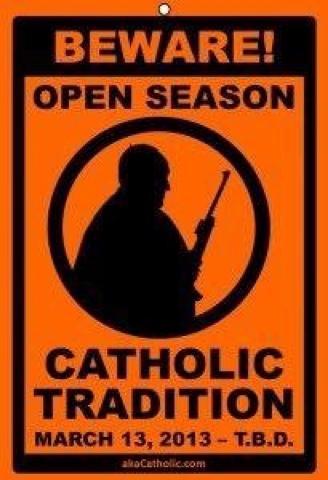 Lord, please free us from this wolf. Let Thy Holy Will be done.

PLEASE GOD, save us from Pope Francis!

I've written this before and I'll write it again. When is someone of stature in the College of Cardinals going to stand up and say enough is enough? This is ridiculous. The longer they wait, the more lunatic talk like this becomes common place and, therefore, tacitly acceptable.

Bergoglio can't be allowed to continue onward with his scandalous mischiefs, especially since he controls the selection process of Cardinals. When he names another batch of storm troopers next year, he'll likely control about half of the college. If that is allowed to happen, then the gig is up.

He REALLY believes that, doesn't he? Trapped in his little cocoon of late 60's early 70's "feel good" Catholicism, soft theology, and radical preferential option for the poor, non-violence garbage. Next I expect Pope Francis to be touting Transcendental Meditation.....if he hasn't already somewhere!
What a loser Pope. The only good thing is that he's just about 79. One way or another (a la Benedict XVI example), he'll be gone soon.
We hope!!
Damian Malliapalli

Lord, have mercy on us ; we are sinners and we repent and ask Thy pardon and forgiveness. Christ have mercy on us. O Immaculate Heart of Mary , intercede for us . Saint Michael,the Arch Angel ,defend us in battle.Crush the Devil by the power of God.
All our Guardian Angels , pray for us ;be at our side to guard and guide us.
Embolden the true and pious shepherds to get together and make Pope Francis to resign forcefully before much more damage is caused ; organise a world wide Rosary crusade , the powerful weapon against Bergoglio.
Lord , we pray to you to raise a powerful leader to fight against the wicked hierarchy within the church ; you alone can do it, Almighty God. Listen to our humble prayers, O Lord and save souls from damnation.

Benedict was fired, They will never fire their idol, they put him there to do the job......it's working.

Cardinal Burke is one of the Cardinal's who regularly corrects the statements of both this pope and his corrupted friends..And you also name some others, but what I too wonder is keeping them from declaring this man to be a false pope.?

I wouldn't count on the Patriarch of Venice Moraglia or Cardinal Bagnasco ...they are quite compromised...- no guts..with plenty of evidence to support this.


As for the rest, I hope. But I don't think the Church can be set on track by a conservative Pope and curia alone...the damage is breathtakingly extensive....no , things will never be the same. The Church they say will be more beauthful than ever after this purification, but when? How long will we have to wait? Well things are happening pretty fast now...who knows we may see something wonderful if we survive the great chastisement - which is now quite evident is bound to happen- we have brought it on ourselves...