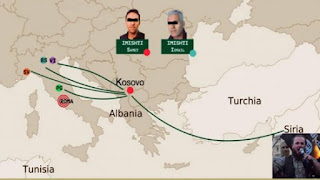 (Rome) in Italy a jihadist cell was exposed. The Italian and Kosovar police led in a joint anti-terror operation in Italy and in Kosovo. Four Islamists were arrested on Tuesday. All those arrested are from Kosovo and the Muslims are of Albanian origin. They are accused of having planned an assassination attempt against Pope Francis. "This is the last pope" is a quote from an Internet entry of the aforementioned Islamists.
Internet surveillance is supposed to have brought  the four suspects under investigation. They have published "unique" images which identified them  as sympathizers of the Islamic Stateidentifies (IS). They have regularly visited websites by jihadist groups, and maintain contacts with Islamists in Syria.
The group had directed threats against Pope Francis and Tracey Ann Jacobson, who was until August 2015, the US ambassador in Kosovo. The suspects "celebrated" the attacks in Paris and urged further attacks.
According to police, the group's leader was arrested in Kosovo. Weapons were seized n his house.  The base of the cell, however, is to have been in the Italian province of Brescia, where three other people were arrested.

"We are in your streets"

In recent months, many Muslims were detained in several police actions. At the end of July  two Islamists, a Tunisian and a Pakistani were arrested. They had leaflets with the black banner of the Islamic State (IS) and circulated the text: "Islamic State in Rome. We are in your streets." Similar pamphlets have surfaced in recent years in several Italian cities.
On the day before the attacks in Paris, Islamists were arrested in various provinces, 17 of them in the South Tyrolean town of Merano. Among them is also Abdulrahman Nauroz.   He and his cell, according to police, recruit new fighters for the Jihad militias in Syria and Iraq. Contacts existed in Switzerland and Finland. Whether this group also had contacts with the Islamist scene in Austria and the Federal Republic of Germany, has not been announced by the investigators so far.
Italian security agencies fear that Islamic terrorist militia could be planning an attack in Rome during the Holy Year, which begins this coming December 8.
Text: Giuseppe Nardi
Image: Polizia di Stato / TG5 (screenshots)
Trans: Tancred vekron99@hotmail.com
Link to Katholisches...
AMDG

Email ThisBlogThis!Share to TwitterShare to FacebookShare to Pinterest
Labels: Islam, Religion of Peace