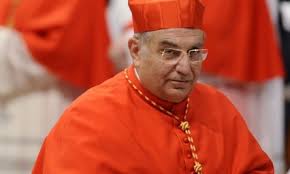 The new Archbishops (from left) Msgr. Zuppi (Bologna) and Msgr. Lorefice (Palermo)
For new archbishop of Palermo, Pope Francis has chosen the Sicilian priest Corrado Lorefice (born in 1962). Ordained priest in 1987, he was incardinated in his home diocese of Noto. Most recently  Msgr. Lorefice was parish priest of San Pietro a Modica and episcopal vicar for pastoral care in the diocese.
For new Archbishop of Bologna, Pope Francis has chosen Matteo Maria Zuppi from Rome (born in 1955). Msgr. Zuppi belongs to the Community of Sant'Egidio. He was ordained a priest in 1981 and incardinated in the diocese of Rome, he received his doctorate in Church history. From 1981-2000 he was a chaplain in Santa Maria in Trastevere. In 2000 he became the spiritual assistant as a successor of the diocesan bishop Msgr. Vincenzo Paglia to the Community of Sant'Egidio. In 2012 Pope Benedict XVI appointed him. auxiliary bishop of Rome and Titular Bishop of Villanova, also a defunct diocese in the province of Mauretania Caesariensis. Msgr. Zuppi has been in the past 25 years, together with Andrea Riccardi, founder of Sant'Egidio, active in the so-called parallel diplomacy, at the official Diplomatic Service of the Holy See. In March 2014 Msgr. Zuppi also visited as the competent Bishop the traditional Roman personal parish Santissima Trinità dei Pellegrini, which is supervised by the Fraternity of St. Peter and celebrated at his own request in the extraordinary form of the Roman Rite.
The local press of Sicily and Romagna speaks of a "great discontinuity". The two successors of the former archbishops have been representatives of the  "poor Church and for the poor" of Pope Francis.
Both diocese were previously linked to the dignity of Cardinal. Under Pope Francis, however, it can not be said  that the newly appointed will also be raised in the cardinal state.
Text: Giuseppe Nardi
Image: Wikicommons / Diocese Noto / Vicariate Rome
Trans: Tancred vekron99@hotmail.com
Link to Katholisches...
AMDG
Posted by Tancred at 5:19 AM

Anybody have any deeper analyses on these two other than a press release? Good or bad? I am unspeakably saddened to see Caffarra go.

Me too, he was a good shepherd, these are street priests, leftist, merciful, ong, quangos, Caritas, PC and liberal, buenos jefecitos anything else?

Both had reached retirement age.

Francis was most generous to let them stick around so long.

I consider Cardinal Carlo Caffarra as a man given a great responsibility by God. In 1997 he wrote a letter to Sister Lucia Dos Santos simply asking for her prayers. He received to his surprise a long letter from Sister Lucia in which she tells him that the final battle between God and satan will be on the Family. This battle blew up full force with the Synod of Bishops on the family in October of 2014.
Fernando