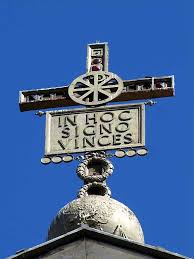 In Hoc Signo Vinces - censorship in the Vatican against Constantine the Great
(Rome) "The impudence of those who are obviously moved, to the detriment of the truth by an ideological schema, is always worrying," said Corrrispondenza Romana.  During proceedings at the Vatican publishing house,  the conference transcript about the Emperor Constantine the Great and the Constantinian Shift has recently appeared. It's a transcript with curious surprises, revealing an alarming censorship.
From the 18th-21st April 2012 on  the occasion of the 1700th anniversary of the Battle of the Milvian Bridge, an international meeting of historians took place on the figure of Emperor Constantine the Great. The meeting had been initiated by the reigning President until 2009 of the Pontifical Committee for Historical Sciences, Cardinal Walter Brandmüller. Renowned speakers discussed  key issues that ranged from the conversion of the emperor, to the relationship between Christians and the Roman Empire, and Constantine's vision before the decisive  victory of October 28th, 312.

Recently, the Vatican publishing house will publish the title "Constantine the Great.  On the Roots of Europe,"  as the conference's volume and which will be presented  in the Augustinianum in Rome. Among the "most important experts in the field", as the acting President of the Pontifical Committee for Historical Sciences writes, there was also the  historian Roberto de Mattei, who illustrated in a highly regarded paper, the "archetypal significance of the Battle of the Milvian Bridge." The presentation by Professor de Mattei is, however, gone. It is not found in the conference proceedings in which the papers were published. De Mattei was also not invited to the presentation of the volume, which can be assessed as an additional personal rebuff by the publisher.
"How is such an inexplicable censorship possible?" asked Corrispondenza Romana. To many it may have caused some upset  that Professor de Mattei regarded the Vision of Constantine, with its luminous signs in form of a cross on the sun with the words "In Hoc Signo Vinces," as genuine.   In a time in which even Catholic theological faculties of priest-professors deny the authenticity of the miracles of Jesus, "because they are  scientifically impossible,"  someone may have felt provoked.

Vision and Victory of Constantine of "Archetypal Meaning" 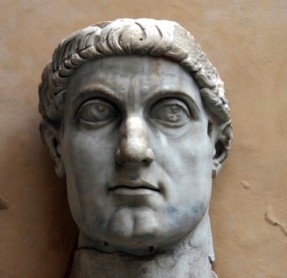 Constantine the Great
The upset stomach of many must have grown, as de Mattei pointed out that in the vision of the emperor and its consequences  became a model for the following centuries, can be seen, and therefore taken up by Saint Pius X which he testified in the Apostolic Exhortation Universi christifidelibus, with which he announced the Constantinian Jubilee in commemoration of the historic event announced on 8 March 1913:
"At that time the Church Militant finally obtained the first of those triumphs which was relieved from previous epochs of all kinds of persecutions and stood ready on that day in the company of the human race for ever greater deeds."
What is significant to the battle of Saxa Rubra as  "military and political triumph," says Professor de Mattei in his speech, is "not separate from the wonderful intuition of Constantine." He continues: "Christ himself called on Constantine and his legions to fight on His behalf. Thus, He established the principle that it is lawful to fight on behalf of God, when the cause is just and the war is declared a holy war. The battle of 28 October proved not only the legality of Christians to serve in the army, but was declared instinctu divinitatis the first holy war of the Christian era."

"In Hoc Signo Vinces" means not only "internal victory over sin, but also public, armed victory"

So the motto "In Hoc Signo Vinces," the "Signum Crucis, binds the symbol of the cross to a victory that is not only the inner victory over the disordered passions and sin, but also a public, armed, military victory."
Although these statements by Professor de Mattei were covered in detail by the sources, they seem not to have fit the picture of someone in the Vatican, whether the Pontifical Committee for Historical Research, the Vatican publishing house or even someone in a high position. To invite a speaker as a designated expert to a meeting and then to dismiss his paper without any justification, without even mentioning the name of the speaker, is not only a personal affront, and not just a violation of all intellectual and academic practice, but pure censorship. It's a manipulation behind which hides a falsification of history.
Corrispondenza Romana provides the additional question: "Who is afraid of Constantine the Great?" 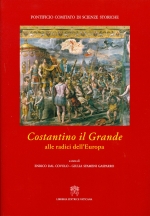 Proceedings
It was not only de Mattei's lecture which has disappeared. But  the presentation by Professor Gianluigi Falchi from the Lateran University also can not be found in the conference proceedings. Professor Falchi talked about freedom of religion and the baptism of Constantine. In this case, there was no "plausible" explanation either,  as the historian had died in the meantime and thus his text could no longer see the printing. However,  a complete eradication is still not justified. Propriety entirely demands the publication of  papers in such cases with a note.
The case of Professor de Mattei, however, offers no "plausible" explanation.  Therefore, there remains only the assumption that the contents of the lecture were not in fitting with the picture of that hasty distancing from the "Constantinian shift" matches in which to practice numerous church representatives.
When emerged from the Battle of the Milvian Bridge, as the chairman of the Pontifical Committee for Historical Sciences, the French Premonstratensian Bernard Ardura, writes in his foreword to the conference proceedings, really a "new world" and a Europe "in which the values ​​of human dignity, freedom of conscience, freedom of religion and freedom of worship flourished ", it is difficult to understand that all this is depressed at the same time in connection with this meeting through censorship with feet that just wanted to emphasize these principles.
Text: Giuseppe Nardi
Image: Corrispondenza Romana
Posted by Tancred at 6:26 PM

The Vatican II thugs and minions of Pope Francis are at work, even here, to warp the Truth to their own agenda, and to shut out those who speak up for the Truth and Catholic tradition and Faith. They think that their power is infinite and that their days in power are forever.
When Francis dies. which probably will be in a short time, these goons will disappear in a heartbeat.
Damian Malliapalli

Why are you so full of rage, Damian?

Jummy, it is called righteous indignation.

Why is yummy so self-satisfied?

Rage in a good sense, not a mentally unbalanced, violent sense. I can just not believe that the Catholic Church has allowed for this kind of Pope and his associates. Three years ago, so much of what we have heard about the topics of the upcoming synod would have been unheard of. Talk of Holy Communion for the divorced or an opening to homosexuality and even gay unions...unthinkable. A Pope who lives in a side building off of the Apostolic Palace, who repudiates the vesture of the Popes, who doesn't even act or talk like a Pope...who had created so many scandals in 2 1/2 years (sometimes 1 a week), it's just mind boggling that Cardinals could have voted for such a person.....and that they and others let it continue.
Sorry if it comes off as rage....just unbelievable how the Catholic Church which despite the disaster of the last 50 years of Vatican II, and also the big crisis of the priest abuse scandals, was still seen as an outpost of holiness and tradition, and the Pope was truly the Vicar of Christ....Benedict XVI was a wonderful example.
But now the Catholic Church has become degraded with talks of soon allowing for this and that unthinkable thing, and rather than trying to stop the slide into the garbage pit with all the rest of the world, this present Pope seems to be willfully pushing the Church in...smiling all the while.

Another point is how Francis has degraded the office of Pope....giving interviews on radio and TV (unthinkable 3 years ago), and now going shopping for a pair of glasses like some tourist off the street?!
Next he'll be seen some night stepping out of a Roman bar with Vatican cronies....or going to a restaurant and sitting down to a big pizza.
No Papal dignity. Benedict XVI was a noble man, a class act. A true Pope.
Francis on the other hand is uncouth as they come. Totally lacking in good taste,manners,and class.

The Francis regime cannot leave anything intact - anything that is good in our practices, our history, our devotions, our Traditions, our identity. I agree that he is a wrecker and appears to delight in tearing apart and bullying. Our Lady prophesied such a time in the Church. We must become more devoted to the Sacred Heart, Our Lady, St. Joseph and the Saints who have given us such good example and council. In doing this we need to support our faithful priests, our families, and communities. Francis does not have the respect of the good members of the clergy but they, without a figurehead, need to see we are there for them and appreciate their suffering too. Lord hear our cries.