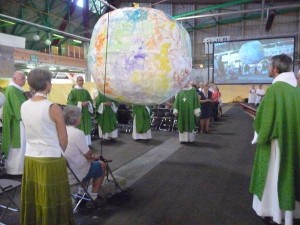 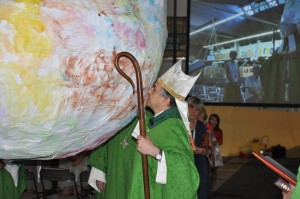 Funny how they wear non-gay vestments when they want their crackpot agenda to be taken seriously. I applaud the showpersons.

With this Bishop of Rome everything is possible, righteous, cool......welcome to the NWO universal church. God bless+

Another even we have this clown in the Cahir of Peter peddling his warped agenda.
I wish he would do/say something so monumentally off Catholic tradtion and teaching that he would be pressured out of office.
Duh, he already has!
How much longer must the Catholic Church suffer him and his gang?

THE
WAKING
OF
MAN

They will question their existence
Contracept with persistence
If man does not wake…
He’s waked out!

Sorry for the above spelling errors....I meant "Another event we have this clown in the Chair of Peter peddling his warped agenda to thank for..."

Straight out of Lord of the World!
What the hell, what. the. HELL. is wrong with these people???
More of the same....

http://voxcantor.blogspot.com/2015/07/archdiocese-of-toronto-televised-mass.html
(tune in at the 27:28 mark; I had to shake my head back and forth really fast repeatedly and listen to it again 5 times before I could believe it...one of the commenters posts the 'lyrics')

Nice of all of them to wear green. That was probably because this is Pentecost. Oh, we don't have Pentecost anymore; we have "Ordinary Time".

They must have been wearing green for some other reason....like the Druids.

You post a pic of a bishop in robes and miter kissing an image (idol) of the earth and then ask: "Was Gaia, Mother Earth worshiped on Sunday, August 30 in Saint Etienne? Was this dubious liturgy Bishop Lebrun's parting gift to the diocese of St. Etienne? " [but them statues of Mary and the saints they had to go w/VC2!]

"Clown in the chair of Peter'? Reads to me as gratuitous invective launched by a brick throwing Orangeman at Christ's representative.
Charming.

Dannnce, dance wherever you may be, for I am the lord of the dance said he..sing it now, eerybody.

Okay,how about "not a true pastor but a destroyer." Work better for you?

Tancred, does Jim work on behalf of the blog? Please let us know, I will certainly do as you request. If you are "jim" well, not sure why you would have two id's.

Nope, he's just one of the profligates from the catty "Todd Zuhlsdorf" blog, and I usually scrape those barnacles off the boat, but sign your posts.