(Caracas) The Universidad Católica Andrés Bello (UCAB) of Guayana in Venezuela has hosted a series of events at the "Day Against Homophobia", which has alleged the normality of homosexuality, bisexuality and transsexuality.
The Catholic University was founded in 1953 named after the the Hispano American philosopher, lawyer, translator, diplomat, politician, poet and Freemason, Andrés de Jesús María y José López Bello.

"The Catholic University has been transformed into an actor in the defense of homosexuality and gender ideology," said Infovaticana. Last May, the University hosted the International Day Against Homophobia, transphobia and biphobia short for IDAHOT, in a series of events to promote homosexuality, transsexuality and bisexuality.  IDAHOT is a private initiative that originates in aberro-associations.
How Radio Familia Venezuela reported, the Catholic University has worked together with the Fundación Reflejos de Venezuela and Orgullo Guayana, whose main objective is the legalization of "gay marriage" and making adoption legal for aberrosexuals.

Aberrosexual movie that denounces Christianity  as the main cause of homophobia 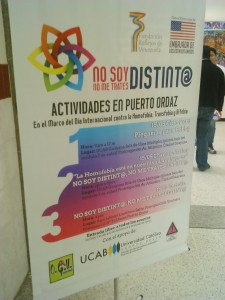 As part of the events at the University, the aberrosexual movie, "Prayers for Bobby" was shown, which makes fun of the Christian religion and represents Christianity as a major cause of homophobia. The campus was "decorated" with rainbow flags.
Homosexuality, bisexuality and transsexuality were presented as "normal" and called for the presentation of a "positive access to sexual diversity" as an educational goal. The students of the Catholic University were invited to participate in the "Gay Pride" event in Guayana. Some professors were honored for their support of the gay agenda.

Andrés Bello, for whom the university was named, (today Venezuela) was born 1781 in Caracas in the Spanish Viceroyalty of New Granada. He was traveling companion of Alexander von Humboldt and teacher of Simon Bolivar.  In 1810 after the independence of Venezuela, he was sent as a diplomat to London. In London, Bello was incorporated on 1811 into the Lodge Los Caballeros Racionales, whose grand master he was in 1812. It was a Masonic secret society, also known as Lautaro Lodge, to advocate the  the anti-monarchist romantic-revolutionary independence of Latin America from Spain. The Lautaro lodges still exist today.
From 1822  Bello, who translated Voltaire into Spanish, was enlisted in the diplomatic services to Chile and settled there in 1829, where he founded in 1842 the University of Chile, whose rector he remained until his death in 1865. Bello, a representative of a positivist philosophy of law, worked up the Chilean Civil Code, which entered into force in 1857 and has been adopted by other Latin American countries.

Andrés Bello is revered by the syncretistic-shamanic María Lionza Cult as a deity and belongs to its Pantheon.
It appears to be an enigma as to why a Catholic university was named after a Freemason. The UCAB is the first private university in Venezuela, which was founded after  the presidency of Antonio Guzman-Blanco imposed a ban on Catholic schools in 1870. Its leadership was established in 1953 by the Society of Jesus, which has led it ever since. The first rector, Fr. Carlos Guillermo Plaza SJ, campaigned for naming it Andrés Bello, which was carried out in 1954.
The Jesuits emphasize that Bello was a "practicing Catholic" whose religiosity is has also been reflected in his lifework. The question of his lodge membership is omitted there. Whether Freemason, Maria Lionza deity or Catholic, the established fact is that Andrés Bello died as a Catholic. In the hour of death he called a priest and received the last sacraments (confession, communion, extreme unction).
Text: Giuseppe Nardi
Image: InfoVaticana
Trans: Tancred vekron99@hotmail.com
Link to Katholisches...
AMDG
Posted by Tancred at 3:14 PM

A reminder of why Gaybriel/Michael Hate Abp. A. Schneider- and Christ-- and Creation-- so, so much. Gayb/Mike, watch it 10 minutes at a time, you can eventually conquer your ADHD (a manifestation of a deeper-seated disorder) on your own, and the personality disorder through God- as can we all. In the meantime, you are the guys that put on the shrill shows that sell tix and make bucks for therapists!!!!!

If you want a spiritual advisor, Christ-based that is, let me know.

The rapid disintegration of the invert continues.