Where the Apostle Peter Celebrated His First Holy Mass in Europe

(Rome) in the Basilica of San Piero a Grado is the place where, according to tradition,   the apostle Peter celebrated his first Holy Mass in Europe in  year 44.  The first Basilica consecrated by the Vicar of Jesus Christ is not Peter's Basilica  located  in the better-known Adriatic town of Grado, but in a small unknown village in the city of Pisa in Tuscany.
Grado is located one kilometer from the River Arno southwest of Pisa. At that time   the main branch of the Arno flowed here into the Tyrrhenian Sea. Today, the site is located just six kilometers from the sea. In the port of Grado, according to the oldest local tradition, is where St. Peter landed, as he wanted to get on a ship from Palestine to Rome. That was in the year 44 AD. In that year, therefore, the celebration of his first sacrifice of the mass in Europe took place.

There are proven traces of churches from early Christian times. The oldest excavated church dates from the 4th century. It stands on the older foundations of the old port facility. The second church was in built in the 6th / 7th century, probably after a fire.
The present basilica was built in the 10th century and was rebuilt and expanded in the next 200 years. The church has the shape of a three-aisled basilica except with the particularity that   east and west facades end with apses. The reason for this is likely to be the severe damage to the original west facade, perhaps by the Arno's flood. Because of the destruction,  the nave was shortened by twelve meters. The entrance has been on the north side since then.

Ancient column and marble top -  the improvised altar, on which Petrus celebrated 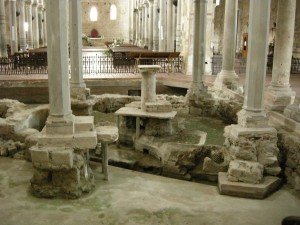 Altar of St. Peter (center)
The church was,  so the tradition, built exactly on the spot where the Prince of the Apostles had celebrated the first Mass on an improvised altar. While the hitherto most important archaeological excavations of an ancient Roman pillar 1955-1965 were discovered with a marble slab on it. This was around the altar of the early Christian basilica. The column and slab are kept in the Basilica.
In the sanctuary is a ciborium located above the altar since the 14th century.   During the excavations it was discovered that the ciborium is exactly above the altar of the early Christian  and Lombard churches.
The excavations offer  by the obvious significance of the altar location and at the same time, the unusual altar, is evidence for the authenticity of Petrus-Tradition. This is also the unusual for a small village, given the size of the church building, which necessitated the  use of the valuable materials, underline the importance of the cult place.

Pope portraits - Older than Those in St. Paul Outside the Walls 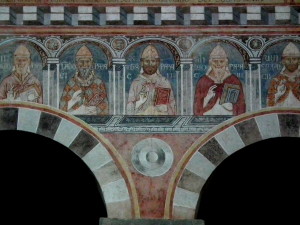 The Popes of the first Christian millennium: older than the portraits in St. Paul Outside the Walls
In 1300, on the occasion of the first Holy Year proclaimed   by Pope Bonfatius VIII.,  the powerful Lombard family of Gaetani gave the painter Deodato Orlandi from Lucca a commission to decorate the appropriate areas of the entire central nave with a fresco cycle.
The extensive work consists of three superimposed image series and has recently been restored. In the bottom row there are the portraits of all the popes of the first Christian millennium, the apostle Peter to John XVII., who reigned in the year 1003.  Pope portraits can also be found in the Basilica of St. Paul Outside the Walls in Rome with the difference that those of  of San Piero a Grado are older.
The middle  frescoes depict the life of the Apostle Peter, including his voyage to Italy; plus scenes from the lives of other saints, including the Apostle Paul and Saint Pope Silvester I. The top row of images show the heavenly city of Jerusalem from whose windows peer angels and saints.
Text: Giuseppe Nardi
Image: Wikicommons / San Piero a Grado (Screenshot)
Trans: Tancred vekron99@hotmail.com
Link to Katholisches...
AMDG
Posted by Tancred at 8:02 AM

Absolutely wonderful photos. I think I will out them into an email and shove it up a few Protestant noses.

I have often wondered what the celebration of Holy Mass looked like in the earliest times. I read that the Blessed Virgin Mary, before her illness, death and glorious Assumption into Heaven attended Mass, and even made the Stations of the Cross in Jerusalem attended by a servant when she was too old to walk unaided. I read that the Blessed Virgin lived to be about 68-70, which for the period was considered very elderly. I read that Saint Peter was probably in his early 70’s when he was martyred, Saint Paul in his early 60’s, and St. John died as the last of the original apostles on the island of Patmos in Greece in his late 90’s!
The early Mass (unlike the misinformed idiots who developed the Novus Ordo at Vatican II), was even back in the time of Saint Peter probably celebrated “ad orientam”, and in the earliest centuries both regards to music and décor resembled more the present Greek Orthodox Divine Service than the Catholic Mass we are familiar with. It was not until about the 6th-7th centuries that the Western Church developed a Mass that we would recognize (ad orientam) with the familiar Western style venstments, and the development of Gregorian chant in Latin on a widespread basis, rather than chants largely in Greek, with some Latin. There were also regional variants of the Mass….the Rites of Braga, Toldeo, Lyon, Ambrosian Rite, Mozarabic Rite, and even a Celtic Rite used by Irish monks and common in Britian right up until the 10th century when the distinctive Roman Rite was imposed on the entire Western Church. Britian also developed the Sarum Rite, a variant of the Roman Rite used until the Council of Trent.
But it is fascinating to imagine Saint Peter celebrating Mass in the year 44 AD. The Blessed Virgin Mary was still alive in the Holy Land, as were most of the disciples. The Church was less than 15 years old at that time!! I would not have wanted to be alive at that time, but would have loved to see how Holy Mass was celebrated in the time of Saint Benedict, or Saint Francis of Assisi. I am sure it was similar to the Tridentine Latin Rite, and not the ad lib farcical service the Novus Ordo is today.

It doesn't matter what this Mass looked like, the church is so beautiful that you can imagine it by yourself, the stones speak holyness.

Correction. What we know as the Schismatic liturgy today is of more recent developement. There's a tendency to view all things Eastern as older, and all things older as Eastern. This is simply not the case. The liturgy of the Infant Church is much closer to a somewhat simpler Roman or Syriac liturgy than the liturgy in a McOrthodox (OCA) parish.

Perhaps the next Pope named Peter will start us over from this altar.

My apologies. Perhaps the next Pope named Peter will start us over from this altar. Mr. John Heuertz, OP Kansas City