Stop the Persecution of Christians: Statue of Our Lady of Fatima Comes to Syria 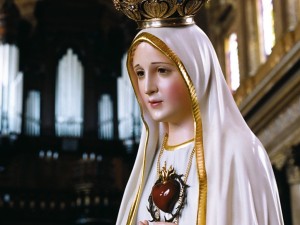 (Fatima / Damascus) with the aim to overcome the fanaticism, the statue of the Blessed Lady of Fatima will be brought to Syria, where a merciless struggle for power and the brutal persecution of Christians rages. The number of Christians in the Middle Eastern country has declined since the outbreak of the fighting in 2011 by 30 percent.
The statue of the virgin and the Mary the Mother of God were located in the famous Portuguese pilgrimage site, where in 1917 she appeared to three shepherd children. This coming September 7 it will be brought into Syria with the aim to hal the suffering by Christians in the  and stop the "fanaticism and intolerance."
"This is necessary because of the great indifference of the international institutions" toward the suffering of the Eastern Christians. With these words, Bishop Antonio Marto of Leiria-Fatima founded the initiative.

Response to call of the Bishops of the Middle East

"We are responding to a call of the bishops of the Middle East, who have witnessed the destruction of the Christian communities," said Bishop Marto and recalled  Pope Francis' plea about the persecution of Christians in Syria and Iraq.
According to the Catholic Church in Syria the cruel war has decreased  the number of Christians in the country by 30 percent since the war began in 2011. The Christians are persecuted, expelled and killed by the Islamic state (IS) and other jihadists.
"Intolerance and fanaticism" of the jihadists is especially directed at the persecuted Christians, said the bishop, referring to the rise of the Islamic State (IS).
Bishop Marto addressed tens of thousands of Catholics in his sermon who gathered for one of the three traditional pilgrimages to Fatima, to give special attention to the persecuted Christians and pray for the end to the persecution.
Text: Giuseppe Nardi
Image: InfoVaticana
Trans: Tancred vekron99@hotmail.com
Link to Katholisches...
AMDG
Posted by Tancred at 12:23 PM

Our Lady of Fatima, pray for those who love your Divine Child. Protect them from this evil religion of the Devil as you once did at Lepanto and Rijeka.

These popes since 1960 has refused to do this consecration, they have ignored the mandate of our Lady. The consecration will eventually happen "late, but not too late" but until then, this is a good idea, the faithful have to take matters into their own hands due to the diabolical disorientation.

@Anonymous: re: diabolical disorientation, Pretty much.