(Cagliari) Archbishop Arrigo Miglio of Cagliari and Primate of Sardinia and Corsica celebrated the Holy Sacrifice of the Mass in the traditional form of the Roman Rite. The former Pontifical Seminary of Cuglieri (Diocese of Alghero) is still empty.
Gaudium vestrum impleatur,  was the motto of the Archbishop cited by the traditional site Messa in Latino  from the Gospel of John. In chapter 15, verse 11, the Lord Jesus Christ is quoted as saying: "This I say to you, that my joy may be in you and that your joy might be full."
Last Sunday, the 200th birthday of Don Bosco, the Metropolitan Archbishop of Cagliari, Arrigo Miglio visited the community of traditional faithful who have gathered, since 2008, in the Basilica di Santa Croce, nearby the cathedral. The Archbishop even celebrated on this occasion  the Immemorial Mass. "A bold step of great importance for the Church", says Messa in Latino .
Msgr. Miglio was named in February 2012 by Pope Benedict XVI. as  Archbishop of Cagliari. Previously he had celebrated the Immemorial Rite as Bishop of Ivrea (1999-2012)  and prepared the ground in his diocese for successor Bishop Edoardo Aldo Cerrato, former Superior General of the Oratorians, a great friend of the traditional rite.
Last April, a new priest of the Archdiocese of Cagliari celebrated his first Mass in the Traditional Rite with great  sympathy from the people. For the first time in 50 years, the Immemorial was said at  the Basilica of Our Lady of Bonaria, the biggest Marian shrine of Sardinia. "It's a symbolic event, because this sanctuary received its name from  Buenos Aires, the Argentine capital and hometown of Pope Francis," says Messa in Latino . The response from the diocesan  leadership and clergy  showed that rejection must be by no means a "self-evident" reflex, although a local daily newspaper at that time roared "scandal."
The vicar general of the archdiocese participated in the first Mass [Primiz], now   Archbishop Miglio himself is celebrating in the Immemorial.  "A clear and unequivocal signal to the priests, especially for those who still take "concerns" to heart: The Holy Mass ritus antiquior has full citizenship in the Church," said Messa in Latino . 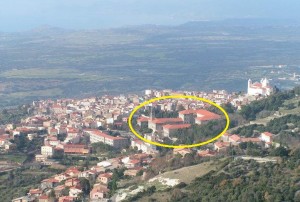 Cuglieri and the former seminary
In Sardinia, it may also be different: in 2012 Old Rite Institute of Christ the King Sovereign Priest (ICRSS) wanted to purchase a former Papal Seminary of Cuglieri, vacant since 1970 in the autonomous region of Sardinia.  The ICRSS has experienced such a large influx of new entrants, that the seminary in Tuscany suffers from lack of space. The Sardinian church, which was in 1976 pleased to sell the plant to the region, and had since then no longer cared, was overreactive in one fell swoop. The Bishop of Alghero (Church province of Sassari) and the adjacent Archbishop of Oristano expressed perplexity and frustration that the Sardinian government sold the building complex to the Institute. The then prime minister of Sardinia, Ugo Cappellacci, was the first "excited" to show the interest in the traditional institution, suddenly said that the offer of the bishops, "better corresponded to local interests."
The "offer" the bishops of Alghero and Oristano was to make the former a seminary an "inter-religious and intercultural center". On January 18, 2014, the Autonomous Region of Sardinia and  Caritas signed a vaguely formulated "agreement protocol" on the future use of the building complex. The former Papal Seminary should, instead of an old ritual seminary, "focus on the integration of different peoples [...] as a symbol that integration is possible", as the press service of the state government reported.

Nothing has happened since then. The Region has assigned the right of use for the symbolic value of one euro to the municipality Cuglieri. This space  is used for occasional events. The majority of the buildings are inaccessible.  Church and cloister can be visited on special occasions. The church is only accessible in certain areas because of the danger of falling ceiling tiles.
The establishment of an old rite seminary was able to be prevented by some bishops, including actively the local bishop. Since then, the interest of the same bishops in the building complex has receded,  which is still in a deep sleep.
Text: Giuseppe Nardi
Image: Mil / Cuglieri
Trans: Tancred vekron99@hotmail.com
Link to Katholisches...
AMDG
Posted by Tancred at 6:54 AM