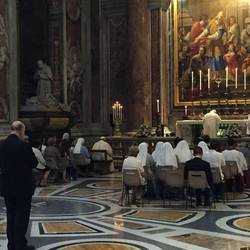 Apparently his hypocrisy knows no bounds.

I submit that it is more than just hypocrisy: Bergoglio does nothing by chance or spontaneously (his pretensions to the opposite notwithstanding); he calculates every word and every gesture. His is cheap but masterful theater all the time. This act of devotion is to disorient those who know him to be the Modernist he really is, to make his critics unsure of the radical modernism that he exhibits at almost every step. If he were the devoted son of the great St. Pius X that he claims he is, he would not have let the 100th anniversary of his death in the year 2014 go unnoticed. Tragically, he truly is the pope that the anti-Catholic Elizabethan poet Edmund Spenser, in his heretical hatred of the True Faith, dubbed "Archimago" in "The Fairie Queene": a true magician with his smoke and mirrors act to fool the naive and the fanatical papolators. RC

Can't argue with your assessment of the Pope as "Jose Bergoglio, Showman," but I see him as something like what the Spaniards call "a creature of the last wind," or a latter-day [insert your favorite adjective] version of St. Paul's "all things to all people."

Feybriel must be a whirling dervish after seeing the Pope's treachery in saying a Mass of the Ages. ROFL

Pope Francis participated at the concelebrated Novus Ordo Mass. It was 'ad orientem' as the altar was fixed to the wall. Check some more photos.
The Pope received Holy Communion at that Mass before which he had spent considerable time praying at Pius X's tomb.

This gentleman is hermetically sealed in delusion. A “class A” example of the pathology fueling a certain component of the ecclesial left that just can’t swallow that they are grievously aberrant in the extreme. Realistically, what can this element do at this point in their personal histories but cling to the garbage they self-constructed to insure their personal comfort zones? Why do the likes of them hold any positions of responsibility anywhere, let alone in the Church?

He is as devoted to pius X as bugnini was to the Latin mass. Wake up sheeple while you still can.

VATICAN CITY — Pope Francis, who encourages prelates to get closer to rank-and-file Catholics, practiced what he preaches Friday, taking a place early among surprised faithful in a front-row pew in St. Peter’s Basilica for Mass.

The pope’s presence at the early-morning Mass was completely impromptu, a Vatican spokesman said.

The spokesman, the Rev. Ciro Benedettini, said the Mass was celebrated at an altar near the entrance of the basilica that is dedicated to Pope St. Pius X. When it was time to receive Communion, Benedettini said, the pope lined up along with the other faithful.

Francis arrived in the basilica without an escort to pray, and then stayed for Mass, Benedettini said.

Vatican newspaper L’Osservatore Romano said about 70 people were at the Mass when it started, but when others in the basilica noticed the pope, attendance grew.

I believe in miracles.